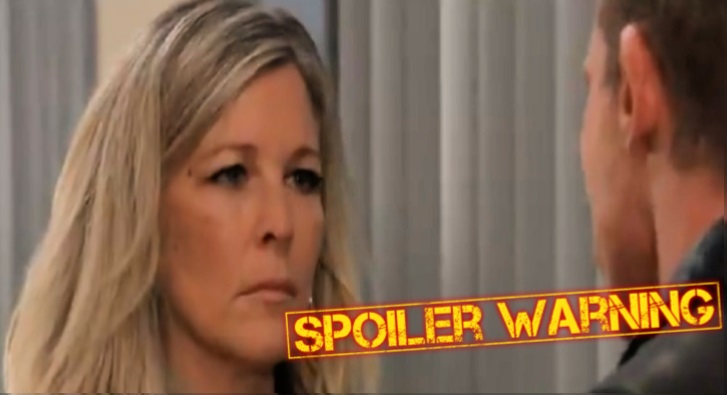 General Hospital spoilers for Friday, March 1, tease that Curtis Ashford (Donnell Turner) will remain concerned. He’ll hope for good news on Jordan Ashford’s (Briana Nicole Henry) condition, but he won’t get the updates he’s looking for. Dr. Hamilton Finn (Michael Easton) will be on hand to explain the situation. It seems Jordan either hasn’t improved or has even gotten worse.

Meanwhile, Peter August (Wes Ramsey) will battle confusion. After Anna Devane (Finola Hughes) and Robert Scorpio (Roger Howarth) approach him with questions, Peter will ask what this is about. Robert will want to address Peter’s lies about the memory-mapping project, but there’s probably another side to all this. There’s a good chance Peter will be shocked by some of the details they divulge.

Other General Hospital spoilers say Felicia Scorpio (Kristina Wagner) and Mac Scorpio (John J. York) will try to help. Lulu Falconeri (Emme Rylan) has been mulling over hints and memory fragments with Maxie Jones (Kirsten Storms) by her side. She’ll explain what she’s got so far and get two more opinions on Friday.

Felicia will argue that there are no coincidences when it comes to Ryan Chamberlain (Jon Lindstrom). She’ll mull over Lulu’s clues with Mac’s assistance later. It looks like they’ll consider the possibility that Ryan is alive, so Lucy Coe (Lynn Herring) is in for a shock when she overhears them.

General Hospital – Ava Will Blast “Kevin” For Keeping A Secret

Next, Ava Jerome (Maura West) will blast “Dr. Kevin Collins” for keeping a big secret. Unfortunately, it won’t be the biggest one of all…not yet anyway. Instead, this will involve Ryan’s trip to Ferncliff. Ava will be upset that “Kevin” visited Kiki Jerome’s (Hayley Erin) killer without telling her about it. She won’t get why “Kevin” would go see Franco Baldwin (Roger Howarth) after all his admissions.

Of course, Ryan will explain away his decision and dote on Ava as usual. He always makes her feel like a queen, so they’ll be back on track soon enough. Over with Elizabeth Webber (Rebecca Herbst), who will be horrified when a bleeding Franco shows up at home. General Hospital spoilers say Liz will find out that Ryan is the real killer. Drew Cain (Billy Miller) will be brought in the loop on Friday, too.

Franco will collapse after ratting out Ryan, so Liz will frantically call for paramedics. She’ll be determined to save Franco from a grim fate, so he’ll land at GH before long.

Finally, Jason Morgan (Steve Burton) will give Carly Corinthos (Laura Wright) a warning. He’ll sense that her curiosity is going to skyrocket her stress level, so he’ll advise against it.

Jason will suggest that finding out isn’t worth the stress it would bring Carly and the baby. They may be discussing another push for answers about “Wilson Ritter,” the Ferncliff patient Carly’s always wondered about. It could even be about Laura Webber’s (Genie Francis) disappearance.