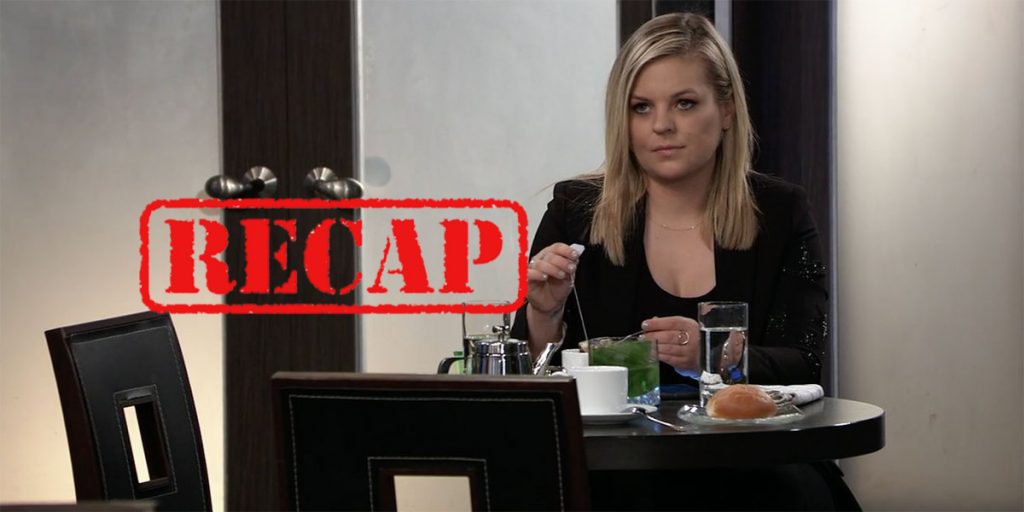 General Hospital (GH) recap for Monday, February 25, 2019, reveals Jason (Steve Burton) wakes up in the hospital with Carly (Laura Wright) by his side.

Jason asks Carly how long he was out, she tells him too long. Carly has been with Jason all night and doesn’t argue about staying in the hospital until the doctor’s release him. Anna (Finola Hughes) arrives and asks how Jason is; she’s there to explain how he got the virus. Anna explains that this started with Dr. Cabot as part of memory mapping. Anna tells Jason that Andre (ex-Anthony Montgomery) used the same serum on Drew (Billy Miller) and Jason that the DVX used.

Maybe Carly has some uplifting news that can help Jason recover from his bout of sudden blindness. @1SteveBurton @lldubs
An all-new #GH starts RIGHT NOW on ABC! #GH55 pic.twitter.com/9WuEKAqSqj

Sam and Carly start to argue, and Jason mentions the pregnancy. Sam and Carly hug and apologize. Sam wants to make sure Jason is ok; he still has a headache but nothing like last night. Jason wants to know what happened in the tower with Shiloh. Jason tells Sam he got her call and started up the stairs. Jason wants Sam to stop, but she refuses and needs Jason to back her up. Jason tells Sam as long as she doesn’t take another trip to that tower. Sam and Jason kiss and Shiloh (Coby Ryan McLaughlin) walks up behind her and witnesses it.

General Hospital’s Sam joins Shiloh and tells him she wants to stay at the hospital to get the prognosis on Scout (Palmer and Poe Parker) and Danny’s (T.K. Weaver) dad’s. Shiloh doesn’t understand how Jason managed to follow them. Shiloh asks Sam if she told Jason where they were going. Sam tells Shiloh she didn’t know so she couldn’t tell him. Sam suggests that Monica (Leslie Charleston) told Jason.

General Hospital’s Curtis is sitting with Jordan at the hospital and promises to be there when she wakes up. Stella (Vernee Watson) joins Curtis and brings him coffee. Curtis asks Stella if she talked to the doctors and she says yes. Curtis asks what is going on with Jordan. Stella tells Curtis that both of Jordan’s kidneys are damaged and one is worse. Jordan may require surgery to remove one kidney, and they may have to look at other options if the second one fails. Curtis tells Stella that Jordan is the police commissioner and now she gets hurt.

WATCH: Stella and Curtis struggle to keep their composure while Jordan recovers from her accident. @donnellturner1 @Bri_Nic_Henry #GH55 pic.twitter.com/ejWtLAecuk

Curtis and Stella talk about how she got through his and Tommy’s career decisions. Stella encourages Curtis to asks God for strength to get through this; that is what she always did. Curtis tells Jordan he never thought she could love him as he loves her. Curtis talks about training himself not to want to be close to her. Curtis talks to Jordan about their honeymoon. Stella comes in and tells Curtis he has a visitor. Drew has come to see Curtis. Drew tells Curtis he wishes he could take it back.

Curtis tells Drew it was an accident and updates him on everything. Drew tells Curtis about the virus, Curtis tells him it’s ok. Stella talks to Jordan and apologizes to her. Stella tells Jordan she is an admirable woman with the courage to face her mistakes. Stella admits to being wrong and promises to make it up to Jordan. Stella continues to talk to Jordan when her alarms go off. Jordan needs emergency surgery.

General Hospital’s Maxie (Kirsten Storms) and Peter (Wes Ramsey) are waiting on the test result, but she hasn’t gotten them yet. Valentin (James Patrick Stuart) interrupts Maxie and Peter. Valentin wants Peter to be his best man. Valentin says he could ask anyone to be his best man, but he would rather have a friend. Peter asks if that is what they are, Valentin says he has known Peter since he was born and considered him a friend. Maxie sees Peter and Valentin’s exchange and isn’t happy.

Peter joins Maxie and tells her that Valentin asked him to be his best man. Peter tells Maxie he agreed to spy on Valentin. Carly approaches Peter and tells him about Jason’s health scare. Carly warns Peter not to blow this second chance. Maxie tells Peter she started to defend him, but he needs to do that himself. Maxie and Peter agree to accept each other mutually. Maxie has Peter read the email from the DNA lab, Maxie grabbed Stella nail clippings instead of Sasha’s.

Nina wants Sasha to stay and be a part of her wedding, West Coat. But the longer she's in Port Charles, the less likely her secret will stay that way. #GH55
A tense, new #GH starts RIGHT NOW on ABC! @TheRealStafford pic.twitter.com/SHV2aYzWNO

General Hospital’s Valentin doesn’t want Nina (Michelle Stafford) to stay in Port Charles and suggests she return home. Nina joins them and interrupts their conversation to talk with her daughter. Nina asks Sasha (Sophie Mattsson) to stay in town until the wedding. Sasha wants to be honest with Nina. Sasha tells Nina she can offer support from afar. Sasha wants Nina to concentrate on the wedding. Valentin interrupts Sasha and Nina’s conversation. Sasha leaves, Valentin tells Nina he asked Peter to be his best man. Nina asks Valentin if he is making their wedding a date night.

General Hospital Cabot Has Another Secret

General Hospital’s Anna joins Cabot who tries to leave. Finn joins them, and they talk about Andre’s research. Anna asks Cabot if he transferred memories to her from Alex. Anna wants to know she could remember something that is Alex’s memory. Cabot tells Anna she would have to ask Alex that. An agent arrives, and Anna says he is taking Cabot to Steinmeyer. Cabot says he told Anna everything he knows. Anna doesn’t believe Cabot and tells him to call. Anna says having memories that aren’t hers could make a big difference. Cabot says he needs to check on a patient and calls someone telling them about that blindness and cure.