General Hospital Spoilers: Will Kevin Make It Out Of Captivity Alive? 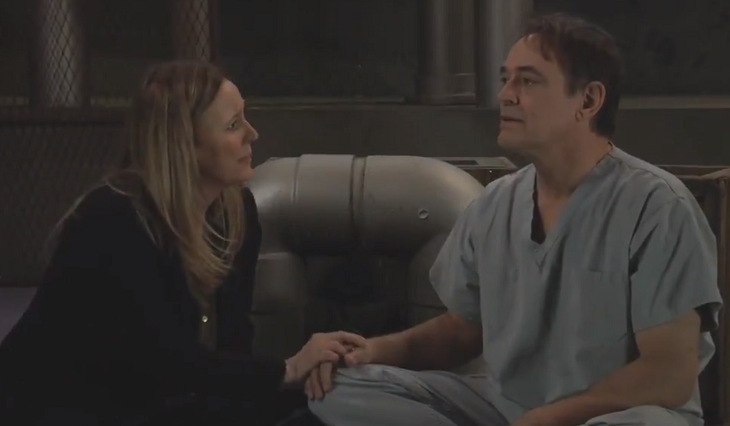 General Hospital spoilers tease that the real Kevin Collins, (Jon Lindstrom) who is trapped in the basement of Ferncliff with his wife Laura (Genie Francis), will soon look for a way out of their predicament. The pair have were locked up by Kevin’s evil twin Ryan Chamberlain.

Kevin is currently blind, not having had access to treatment to reverse the retinal hemorrhage he suffered as a result of the attack of the blindness virus, but Laura will be his eyes.

He has been treating patients at Ferncliff long enough to remember the layout of the facility and will try to remember if there is another way out of the basement.

By this time, Kevin and Laura have probably been trapped for at least one day, if not longer. Soon, Port Charles residents and Lulu Falconeri (Emme Rylan) and Spencer Cassadine (Nicolas Bechtel) will start to become suspicious as no word from Laura starts to point to something unsettling.

Other General Hospital spoilers tease that Mac and Felicia Scorpio (John J. York, Kristina Wagner) will have a theory. This theory may be that Kevin, who has been in Port Charles freely living his brother’s life, is actually Ryan Chamberlain.

General Hospital – How Soon Will Kevin And Laura Make Their Escape?

Mac may step in as a former commissioner to assist the PCPD. Little did Lulu know when she was upstairs interviewing Franco Baldwin (Roger Howarth) that her mother and the real Kevin Collins were downstairs in the basement needing rescue.