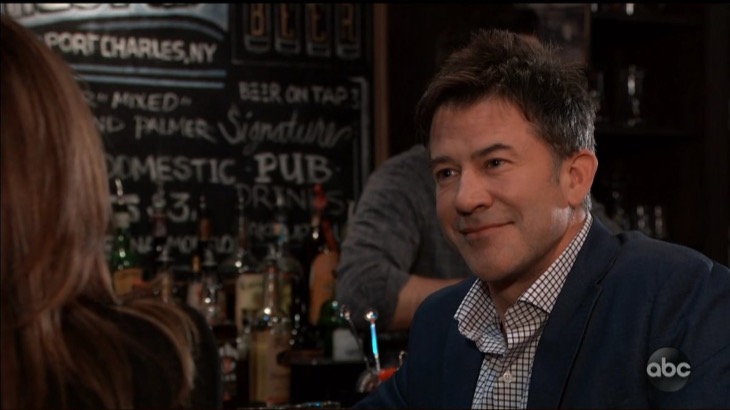 General Hospital spoilers tease that new therapist in town Dr. Neil Byrne (Joe Flanigan) may be a new love interest for Alexis Davis (Nancy Lee Grahn), but in fact he could be tied to the Cassadines, either as a new piece of the family tree, or a relative of another Russian family who could be a rival family of the Cassadines going back hundreds of years!

One thing is for certain at this point; even though the setup seems to be for Alexis to have a new love interest, they can’t get involved if he’s her therapist. That would be a conflict of interest, but then Scott Baldwin (Kin Shriner) shouldn’t be defending his son Franco (Roger Howarth) either, and GH writers seem to be ignoring that conflict of interest so they may well ignore this one as well. The fact that he was reading a book on exiled Russian aristocrats when Alexis and he met in Charlie’s Pub could, however, be a hint that could tie him to the Cassadines.

The Cassadine family are descendants of Russian royalty, but the reasons as to why they are not still considered royalty and why there are no members still in Russia could be as simple as the takeover by the Bolsheviks, similar to what happened to the real-life Romanov royal family, only the Cassadines may have been able to flee into exile.

There was also a Belgian branch of the Cassadine family mentioned in a GH episode December 29, 1998, by Nikolas Cassadine (Tyler Christopher). Even though “Byrne” appears to be a Scotch-Irish surname, his mother or other relatives further back could have been Cassadines or possibly even enemies of Cassadines! There has to be a reason for him to be looking into exiled Russian aristocratic families, even if it is an innocent one like studying genealogy and trying to trace his family tree!

This is only the start of Dr. Byrne’s time in Port Charles and if he is a new distant Cassadine relative or a member of an ancestral enemy family, he could complicate the lives of several different GH characters and their families. Stay tuned to General Hospital and keep checking General Hospital spoilers frequently to see if Dr. Neil Byrne turns out to be a new love interest for Alexis, or possibly a distant relative or Cassadine enemy!