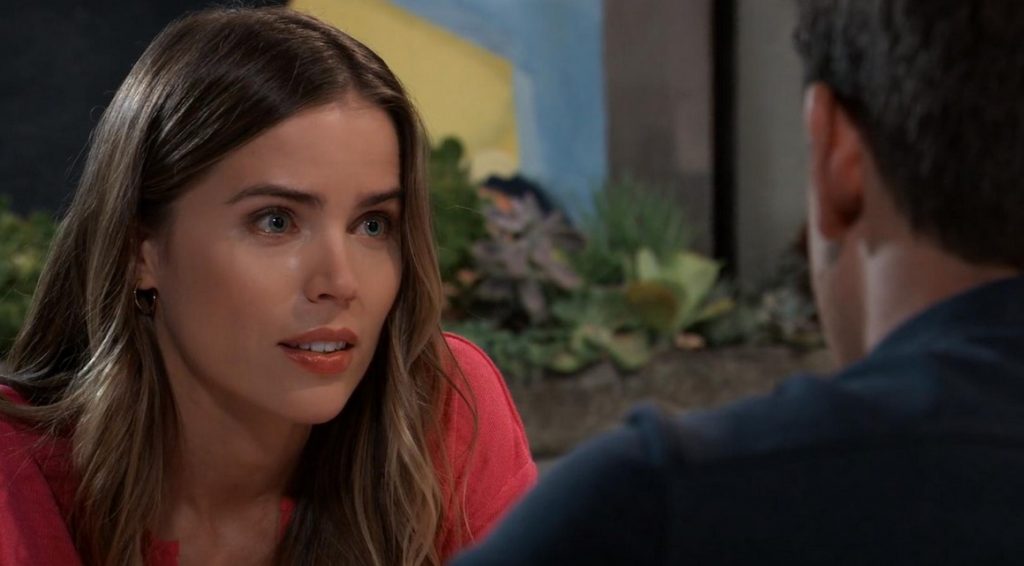 The aftermath of the reveal that Sasha Gilmore (Sofia Mattsson) isn’t really Nina Reeves’ (Cynthia Watros) long-lost daughter will continue this week on General Hospital. In this week’s Sneak Peek, Liesl Obrecht (Kathleen Gati) will confront Valentin Cassadine (James Patrick Stuart) about his lies, and demand the truth about what he knows regarding whether Nina miscarried or if Obrecht has a grand-nephew or grand-niece alive somewhere.

She may decide to investigate herself, because she will get an enlightening phone call and Valentin will be surprised! Meanwhile, Maxie Jones (Kirsten Storms) is just relieved that her suspicions were right all along! Michael Corinthos (Chad Duell) will continue to support and be committed to Sasha. 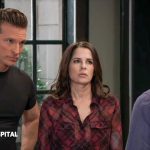 As soon as Sam McCall (Kelly Monaco) got the good news last week that all charges against her for the pre-meditated murder of Shiloh Archer (Coby Ryan McLaughlin) were dropped, here came the FBI, and Agent Edward Caldwell (James G. MacDonald) informing Commissioner Jordan Ashford (Briana Nicole Henry) that since The Haunted Star had been in international waters, it is happened in their jurisdiction.

The ship must have been in borderline Canadian/US waters, and in real life the Coast Guard and Canadian authorities would have done a joint investigation, but this is Soapland! Bryce Henderson, (Brian Gross) the goon who helped Shiloh escape was brought in and he fingered Sam as the person who paid him to break Shiloh out, although in reality it was Peter August (Wes Ramsey). Jason Morgan (Steve Burton) will remain determined to prove his theory that Peter and Shiloh were working together somehow to free Sam, and by the end of the week he will be cautiously optimistic.

Viewers will recall that Nelle Benson (Chloe Lanier) is up for parole, and has hired Martin Gray (Michael E. Knight) as her attorney. She has contacted Brad Cooper (Parry Shen) and he will attend her parole hearing as a character witness. Michael, as her ex-fiance who she tried to kill, will be concerned, and concerned for his girlfriend Sasha and his family who as viewers know, Nelle hates!

The baby swap secret is also tied up with Nelle’s parole hearing, as if she makes parole she may decide she wants her son, Jonah Corinthos (Erik and Theodore Olson) back, who was adopted by Brad and his husband Lucas Jones (Ryan Carnes) under the name Wiley Cooper-Jones, who in reality was the baby Willow Tait (Katelyn MacMullen) gave up for adoption, but died. Lucas will be troubled by what Brad may be keeping from him, while Julian Jerome (William DeVry) will also be uncomfortable since he knows the secret also, especially when he finds out Curtis Ashford (Donnell Turner) is questioning Brad!

Franco Baldwin’s (Roger Howarth) guardianship hearing will take place this week, which will determine whether Elizabeth Baldwin (Rebecca Herbst) will be able to continue to make his medical decisions, and whether Dr. Andre Maddox (Anthony Montgomery) will be able to perform the risky memory transfer reversal attempt on him. As viewers will recall, the flash drive with Drew Cain’s (Billy Miller) baseline of memories prior to 2012 was downloaded into Franco’s brain when he took Cameron Webber’s (William Lipton) place.

Kim Nero (Tamara Braun), who wants Franco to stay “Frankendrew” has also hired Martin Gray to represent “Drew’s” interests in this hearing, and she and Liz will cross paths at the hospital and possibly get into a catfight over it! Liz will look on as Scott Baldwin (Kin Shriner) prepares for the hearing, where Cameron volunteered to get on the stand and tell what happened from his perspective, focusing on Franco’s heroism in taking his place to save his life. Franco will get a visitor, while Cameron will track Kim down after she seems to have disappeared!

After instructing Bryce to finger Sam, Peter will continue his cover-up as he meets with a mysterious woman who he will have a mission for. Jason will continue to look for proof to connect the dots between Peter and Shiloh, and will be certain that Bryce is the missing link; when he shows Andre a photograph of Bryce, Andre will identify him as the man who stabbed him! Peter’s house of cards is getting ready to collapse as Jason continues to seek proof that links him not only to Shiloh’s escape and Sam’s frame-up, but Drew’s disappearance and Andre’s stabbing as well, suspecting Bryce is only a hired thug!

That’s all for this week’s Five Key Takeaways From This Week’s General Hospital. Keep watching, and keep checking General Hospital spoilers frequently for all the latest news, updates and developments!

Days of Our Lives Spoilers: Julie’s Health Crisis Not Over Yet – Gabi’s Sacrifice Pointless?