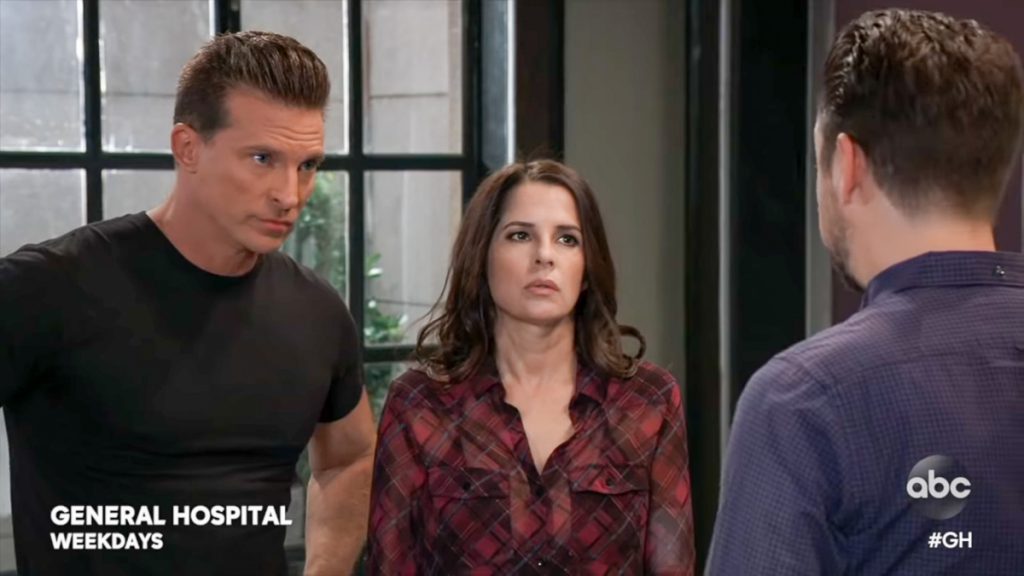 Kim Nero (Tamara Braun) has her doubts as she asks Elizabeth Webber Baldwin (Rebecca Herbst) if she’s sure she’s doing the right thing! Of course she is talking about the guardianship of Franco Baldwin (Roger Howarth) and trying to force him into having pre-2012 Andrew Cain’s (Steve Burton) memories and personality removed so Franco can be himself instead of “Frankendrew”!

Court is coming up soon and what Liz wants is diametrically opposed to what Kim wants – which is for “Frankendrew” to stay just the way he is, although a re-swap with Jason Morgan (Steve Burton) so Drew’s physical appearance would match what it was would be icing in the cake for Kim, although it may carry a nasty side effect of murder by Jason inside Franco’s body! That would really set him off!

Franco, meanwhile has a surprise visitor – Julian Jerome (William DeVry)! Franco tells him he’s a little late for a surprise visit, however viewers have to wonder why Julian would visit him to begin with! Perhaps, he too, is visiting what is left of Drew Cain (Billy Miller) in Franco’s body to tell him he has a daughter with Julian’s daughter, Sam McCall, (Kelly Monaco) but that is doubtful.

This is more likely to be an angry confrontation over “Frankendrew’s” taking advantage of Kim’s fragile state to have his way with her. THAT is something that the REAL Drew Cain would NEVER have done! Julian may have given up on a future with Kim because of her living in her past with Drew, but it doesn’t mean that he still doesn’t care about her!

At the PCPD, Commissioner Jordan Ashford, (Briana Nicole Henry) Detective Harrison Chase, (Josh Swickard) and FBI Agent Edward Caldwell (James G. MacDonald) stare down Bryce Henderson, (Brian Gross) the goon that Peter August (Wes Ramsey) hired to break Shiloh Archer (Coby Ryan McLaughlin) out of jail. Jordan has some stern words for Bryce as she tells him if he wants to have any hope of saving himself, he needs to start talking!

Elsewhere, Peter issues an order. It looks like he is talking to the person as he tells him or her that he or she understands what needs to be done! Other General Hospital spoilers tease that Peter meets with a mysterious woman, and her name is Roz (Nawal Bengholan). He has an important mission for her!

At Crimson Magazine, Maxie Jones (Kirsten Storms) talks to her friend, boss and sister-in-law Nina Reeves (Cynthia Watros) in disbelief as she asks her if she thinks Valentin Cassadine (James Patrick Stuart) was telling the truth! This must be referring to Valentin having told Nina that her late mother, Madeline Reeves (Donna Mills) told her she gave birth to a baby girl that Madeline put up for adoption.

Viewers will recall in Friday’s episode that Sasha Gilmore (Sofia Mattsson) had dropped the name “Carter Buckley” (Billy Campbell) to Nina when she was trying to make amends in Friday’s episode; Carter Buckley was the baby broker that Madeline had used, although he did pass away shortly after Curtis Ashford (Donnell Turner) questioned him. It sounds like Nina is going to do some searching for her real long-lost daughter on her own and Maxie might be wanting to spare her false hope!

Back at Wyndemere, Liesl Obrecht (Kathleen Gati) may be thinking the same thing as Nina, as she asks Valentin if Nina’s child is alive! If Valentin restarts that search, maybe with Liesl’s help, perhaps they will find the right long-lost daughter, and that would go a long way towards Nina’s being willing to reconcile with them! After all, Liesl worked at the clinic where Nina gave birth when she was in a coma, although perhaps she started after the baby was born, and may keep in touch with some important contacts who could steer them on the right path; that is a factor that Valentin and Curtis didn’t have the first time!

GH Spoilers – Jason Morgan Needs To See Someone Right Away

Elsewhere, Jason is on the phone and needs to see someone right away; he undoubtedly is working overtime trying to secure Sam her freedom – again – after Peter re-framed her for Shiloh’s murder!

The Bold And The Beautiful Spoilers: Thomas Helps Zoe– Sparks Fly Between The Two