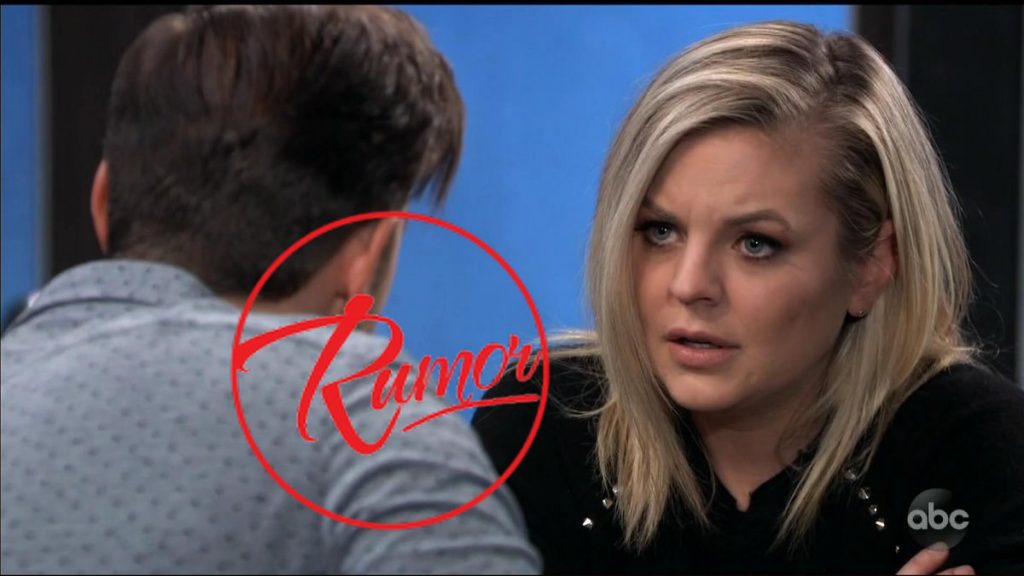 General Hospital spoilers tease that parts of Maxie Jones (Kirsten Storms) and Peter August’s (Wes Ramsey) conversation on March 8th’s episode of General Hospital could be a hint from the writers about what will happen with Carly Corinthos (Laura Wright) and her pregnancy. It could be a coincidence, but remember Wes and Laura are together in real life, and even though they don’t have many scenes together, they probably practice their lines together at home.

Part of Maxie and Peter’s conversation was about things that Maxie regretted in her past…in particular, deceiving her close friends Dante and Lulu Falconeri (Dominic Zamprogna, Emme Rylan) about her surrogate pregnancy a few years back. General Hospital viewers who were watching back then will recall that Maxie was the surrogate for one of their frozen embryos (one of which turned out to not be viable when needed, the other turned out to be their son, and Maxie carried the other) and she tripped over a puppy and miscarried the first.

She then had comfort sex with Spinelli (Bradford Anderson) and had Georgie (Lily Fisher), and let Dante and Lulu think she was theirs. It just turned out to be a big, hurtful mess that put a wedge between Maxie and Lulu which took a long time to heal!

Can Carly find the strength to pull herself out of the ravine where Ryan left her? Click to watch today's thrilling, new #GH – RIGHT NOW: https://t.co/OHGfY9fAgU #GH55

As Maxie was admitting her mistakes and told Peter that she had miscarried Dante and Lulu’s embryo, he interrupted, trying to help, by saying “People miscarry all the time!” Could that be a hint from the writers that Carly may miscarry her baby after all?

The reality is, after being tied up and unconscious in Ryan Chamberlain’s (Jon Lindstrom) trunk, beaten and knocked out with a tire iron and then thrown down in a culvert at the bottom below a footbridge from the footbridge, and later sliding back down to the bottom again after trying to climb out to safety, it will be a miracle if she doesn’t miscarry! Even if it weren’t due to injury, she certainly could not have avoided stress to the 99th degree from that traumatic event!

It would be sad indeed if Carly’s baby wound up being an indirect victim of Ryan Chamberlain, but maybe by some miracle (and she’ll need one!) the baby will survive; stay tuned to GH and keep watching General Hospital spoilers for all the news and updates on Carly and her unborn child!