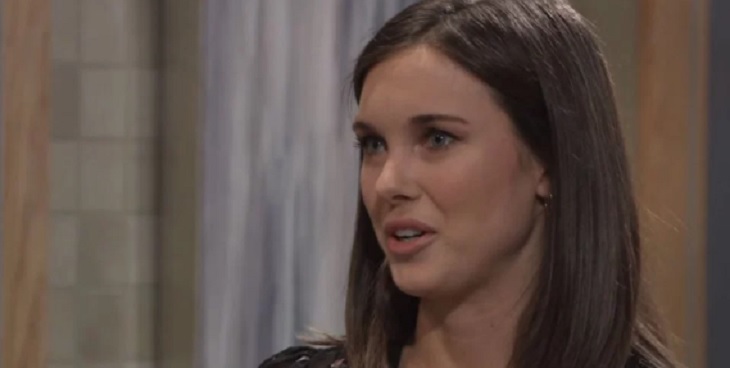 General Hospital spoilers tease that the “her” Shiloh Archer (Coby Ryan McLaughlin) was referring to when he asked Harmony (Inga Cadranel) if she had found “her” yet in on the Thursday, March 13 episode of GH could be Willow Tait (Katelyn MacMullen).

Shiloh implied the woman he asked Harmony about may have been in the Beecher’s Corners Dawn of Day group, which could fit with Willow being a fairly new transplant to Port Charles. Otherwise he wouldn’t be asking Harmony if she’d been found.

Other General Hospital spoilers tease Willow could have been raped by the baby’s father. This would certainly be consistent with her wanting to give up the child for adoption. She may have initially felt she couldn’t deal with the reminder of the rape in the person of her child. Then later she was able to disassociate the rape and the effect, being the child.

General Hospital Spoilers – Could Willow Have Been Involved In The Cult?

She has said little about the baby’s father to anyone, other than that the relationship was a real bad situation. This implies it could have been an abusive situation, but Shiloh and Willow have seen each other with no apparent recognition, so it is likely to not have been a real relationship. It is possible that Shiloh raped her but never looked at her face, and that it could have been some bizarre cult initiation on a higher up level where the disciples are masked!

Another possible scenario that would fit for Willow to be the woman is that Shiloh himself is not the father. She could have been involved with another man at the Beecher’s Corners Dawn of Day.

Or she could have sought shelter there from him but fled the cult once she knew what it really was, and Shiloh wants his disciple back. Dawn of Day may be the kind of cult that once a person is in deep, they don’t leave of their own volition. This certainly doesn’t bode well for Kristina Corinthos-Davis (Lexi Ainsworth).

General Hospital viewers will recall that a few years back, Beecher’s Corners was mentioned in connection with another storyline and another woman, Hayden Barnes (Rebecca Budig). She originally was in Beecher’s Corners before coming to Port Charles. She was part of the “Jake Doe” storyline where she was trying to run a scam claiming she was his wife, because her husband resembled him.

GH viewers should also recall the reason that when she left Port Charles, there was more to it than a pregnancy with Dr. Hamilton Finn’s (Michael Easton) child. She was fleeing her ex, who had caught up to her and was a particularly nasty individual – Jared Preston, Jr.(Matt Corboy).

Jared was released from prison in July, 2017 whereas the original Wiley Cooper Jones was born in July, 2018. This would be enough time to accommodate a pregnancy. If her baby daddy wasn’t Shiloh himself, could it have been Jared? Hayden left in August 2017. It’s also important for GH viewers to remember that Liesl Obrecht (Kathleen Gati) was involved in bringing Jared to Port Charles, and she gave him money to leave.

Jared could have easily gone to Dawn of Day in Beecher’s Corners as a halfway house after being released from prison and Liesl paid him to leave town. On the Tuesday, March 12 episode, after Valentin Cassadine (James Patrick Stuart) accused her of betraying him, which was related to Sasha Gilmore (Sofia Mattsson) being a fake daughter for Nina Reeves (Michelle Stafford) she is seen writing a letter to herself in her Invader column.

She wrote: “My son was adopted under unusual circumstances.” That sure didn’t seem to be about Sasha. Could she have written it as a secret message to Jared?

General Hospital viewers have noticed and been confused with the recent habits of GH writers in recreating or changing even relatively recent history, as in the body in Croton story. Sonny Corinthos (Maurice Benard) went from being someone who buried a body to someone who carried out the hit.

So even if Jared makes more sense, they could still write that Shiloh is the daddy. Even though he and Willow have seen each other with no seeming hints of recognition. Stay tuned to GH and keep checking General Hospital spoilers frequently to see all the latest updates and developments!