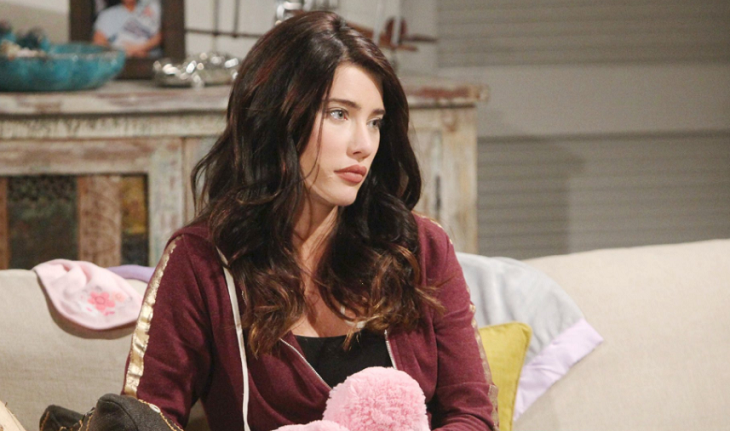 The Bold and the Beautiful (B&B) spoilers tease the comings and goings news reveal shocking returns and stunning exits are ahead on the CBS soap opera. With so much going on in the baby swap storyline, it’s no surprise that they are bringing some new characters into the storyline. Here’s what you need to know about what’s ahead on the soap opera.

Jacqueline MacInnes Wood (Steffy Forrester) will be exiting B&B for a few weeks. The actress just had her baby boy and  she will take some much-deserved time off.

Steffy will announce later this week that she is heading with her daughters to Paris to allow Liam Spencer (Scott Clifton) and Hope Logan (Annika Noelle) some time to work on their marriage. She will return in a few months.

B&B spoilers say that Hunter Tylo returns as Taylor Hayes on Thursday, March 14. She will be shocked to learn her daughter Steffy wants to head off to Paris for a few weeks. Later in the week, she will greet her son Thomas as he returns home.

The Bold And The Beautiful Spoilers: Is Caroline Coming Back To B&B?#BoldandBeautifulhttps://t.co/n4vDBDiKrw

Matthew Atkinson will debut as Thomas Forrester. Thomas was last seen last year when he broke up with Sally Spectra (Courtney Hope). He is coming back permanently with his son Douglas, played by Henry Joeseph Samiri. His return to L.A. will send Sally into a tailspin, causing her to question her relationship with Wyatt Fuller (Darin Brooks).

Denise Richard will debut as Shauna, Flo’s (Katrina Bowden) mother. Shauna will come on the scene to help her daughter, after learning she has gotten herself in quite a pickle. She will want to give her advice and support her emotionally.

Of course, there is a rumor that Shauna may be connected to Bill Spencer (Don Diamont) in some way. Richards’ first airdate on the Bold and the Beautiful is Thursday, April 4.

Tamar Braxton, Celebrity Big Brother 2 winner, will appear on The Bold and the Beautiful on Friday, March 29. She will be a chef at an upscale restaurant cooking for Katie Logan (Heather Tom) and Bill Spencer.

Days Of Our Lives Spoilers: Eric Makes A Bargain With God – Vows To Give Up Sarah If Marlena Lives