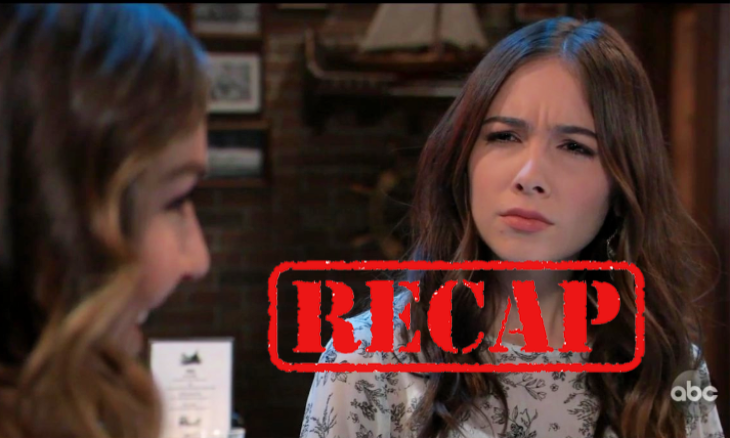 Ava attacks Kevin, and Scott Balwin (Kin Shriner) separates them and tells Ava that Ryan is dead. Kevin tries to convince Ava that he is Kevin. Ava looks at Kevin’s wrist band and realizes the truth. Kevin asks Scott to give him a moment alone with Ava. Kevin attempts to talk to Ava about Ryan. Ava doesn’t want to bond with Kevin. Kevin encourages Ava to speak to someone about her ordeal. Ava tells Kevin that opening up got her into this mess. Amy tells Kevin she can get his paperwork together for his release. Laura doesn’t want Kevin to go home with her right now. Meanwhile, Ava rips Kevin’s picture off the wall and shreds it.

General Hospital’s Anna Devane (Finola Hughes) meets with Andre Maddox (Anthony Montgomery), and they discuss Jordan Ashford’s (Briana Nicole Henry) condition. Anna tells Andre about the memory procedure she had done before and needs his help to understand. Andre tells Anna he didn’t know anything about the other cases. Andre tells Anna he may have something that could help her.

Andre Maddox is back to help Anna make sense of Dr. Cabot's experiments. But she may not like what he has to say.
A tense, new #GH starts RIGHT NOW on ABC! @MrAMontgomery #GH55 pic.twitter.com/LL38SoaxzT

Oscar's return to Port Charles has done nothing for Drew or Kim's nerves. And that's before an unlikely visitor hands out unsolicited advice. #GH55
Tune into an emotional, new #GH – STARTING NOW on ABC! @TamaraBraun pic.twitter.com/tynxtRWHvO

General Hospital’s Drew Cain (Billy Miller) and Kim Nero (Tamara Braun) discuss Oscar Nero’s (Garren Stitt) condition. Kim thinks this may be the last room Oscar is in, Shiloh Archer (Coby Ryan McLaughlin) arrives and tells them miracles happen every day. Kim and Drew turn down Shiloh’s offer to help Oscar. Shiloh tells Drew he should be proud of the man he has become. Kim tells Drew that she can spot a charlatan a mile away. Kim and Drew realize that Oscar is looking for a miracle but doesn’t want them to know. Drew and Kim hug each other and admit to being scared about what happens next.

Sam and Molly tell Kristina she is too quick to dismiss Valerie. Kristina tells Sam she is jealous of her going on the trip with Shiloh. Molly asks if they would be discarded as quickly. Alexis arrives to meet the girls, Sam gets a text and has to leave. Molly and Kristina ask questions about Alexis being at the hospital. Kristina says Alexis shouldn’t rely on a doctor to help her and starts talking DOD self-help protocol.

Laura's not in any hurry to stop her divorce from being processed. Can her marriage with Kevin survive his lies about Ryan?
An emotional, new #GH STARTS NOW on ABC! @GenieFrancis #GH55 pic.twitter.com/QuR7BLlnHp

General Hospital’s Finn asks Alexis Davis (Nancy Lee Grahn) to eat with him; she declines. Alexis tells Finn she is meeting her daughters at Charlie’s, Finn questions if that is wise after Alexis’ dream. Alexis says she can’t avoid Charlie’s her daughter works there. Alexis runs into Lulu Falconeri (Emme Rylan) and Laura Webber (Genie Frances) on the way out. Laura tells Alexis that Ryan switched places with Kevin in August. Alexis offers to invalidate the divorce; Laura is in no rush to do so. Alexis warns Laura that the board needs to make a statement dealing with Ryan practicing as Kevin.

General Hospital’s Lulu encourages Laura to get on with her marriage to Kevin now that he’s back. Laura tells Lulu that Kevin has knows that Ryan was alive since May 2018. Laura tells Lulu that Ryan was in Ferncliff and Kevin treated him for months. Lulu says if Kevin had been honest, none of this would have happened. Laura says there was always the possibility that Ryan would escape. Laura is upset that Kevin has kept the secret from her for months. Lulu asks Laura if she thinks she and Kevin can work things out.

What's better than a date night, West Coast? But make sure to bring an umbrella, the forecast is calling for rain. ☔️ ☔️ ☔️
A sexy, new #GH starts RIGHT NOW on ABC! @josh_swickard #GH55 pic.twitter.com/bdZsk89SKB

General Hospital’s Willow Tate shows up at Harrison Chase’s room and pulls him into a kiss. Willow and Chase decide to take a walk before work. Chase and Willow get wet in the storm, and he offers to dry her clothes. Willow changes into one of Chase’s shirts, and he offers her a bottle of wine. Chase wants to spend more time with Willow as a couple. Chase and Willow start to kiss when the dryer buzzer sounds. Chase goes to get Willow’s clothes for her. As Willow gets dressed, we see the same tattoo as Harmony Miller (Inga Cadranel) and Daisy Kwan (Kelsey Wang). 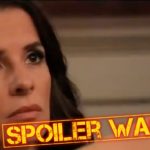 General Hospital’s Sam goes to the DOD house to investigate. Shiloh comes into the room drying his hair. Shiloh asks why Sam is there; Sam wants to talk about Kristina. Shiloh agrees to speak to Sam, but Sam wants him to put on a shirt, Shiloh asks if she is uncomfortable.