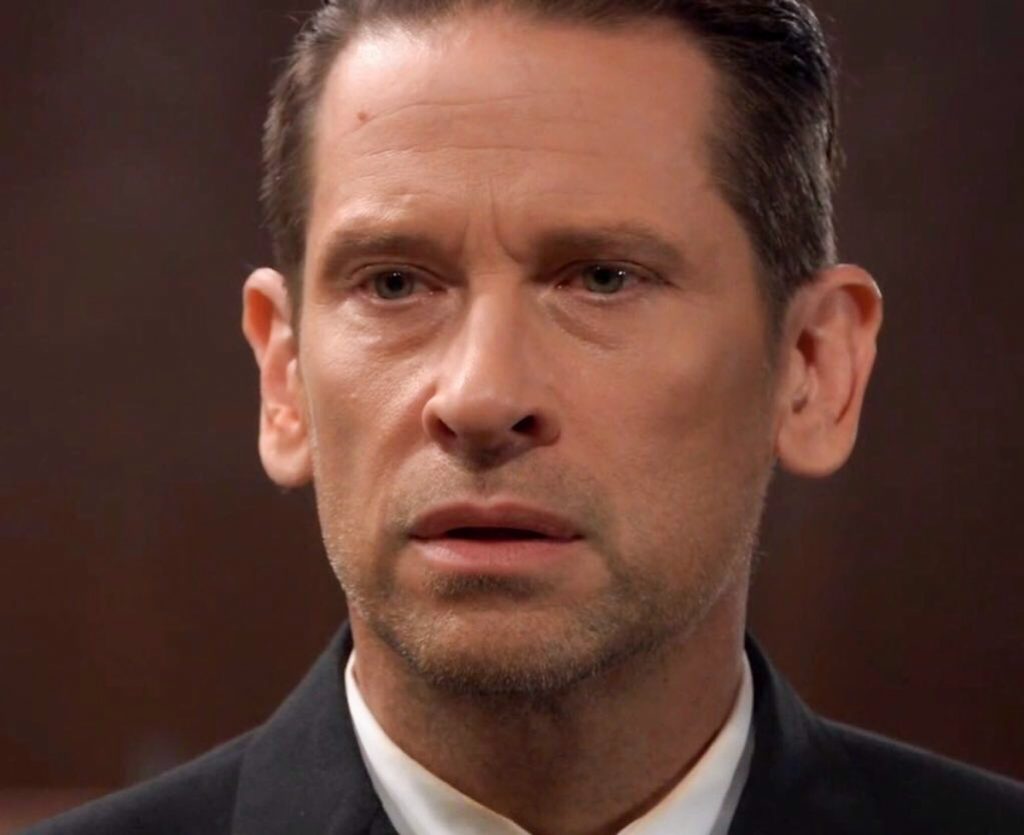 Welcome to your Tuesday October 29th General Hospital (GH) recap! We begin our day at Alexis Davis’s (Nancy Lee Grahn) house where Dr Byrne (Joe Flanigan) has brought her takeout for dinner. She invites him to stay and eat when theres a knock on the door, its Jason Morgan 9Steve Burton).

At Elizabeth Webber’s (Rebecca Herbst) house, she is on the phone trying to reach her son Cameron Webber (James Lipton). He arrives home and says he turned off his phone because too many reporters were calling.

In Sonny Corinthos’s (Maurice Bernard) gym he is closing up when Scott Baldwin (Kin Shriner) arrives. Scott tells Sonny that he “owes him and he’s come to collect.” Sonny tells Scott he is sorry for what happened at the trial.

At the courthouse, Kim Nero’s (Tamara Braun) phone is ringing and she realizes its Julian. Kim says to Frankendrew (Roger Howarth) that there is nothing stopping them from going back to San Diego, Franco says – yes there is. Kim says he does not owe Elizabeth’s family anything and he says they can’t just pick up where they left off. Kim begins to break down and cry.

Franco brings up that Kim was out of control when she drugged “Drew” and tried to violate him. Kim is hysterical and begs him to stay with her and make a life together. She storms off after realizing that he may not want her broken.

Julian Jerome (William DeVry) leaves another message for Kim while taking out the garbage. He runs into Kendra who is throwing away a container of the supplements she’s been giving Alexis. Julian catches her and she says she was just going to the restaurant through the back alley.

At her house, Alexis lets Jason Morgan (Steve Burton) in who says that Sam Morgan (Kelly Monaco) has decided to do a bench trial. Alexis is furious about the bench trial and Jason agrees that it’s a bad idea.

GH Spoilers – Peter August has an offer for Maxie Jones

At the Crimson magazine office, Maxie Jones (Kirsten Storms) is angry at Peter for cancelling their dinner and says shes just going to go home to her baby. Peter August (Wes Ramsey) says he has a breaking story he needs to work on and can’t reach a reporter.

Peter says this Franco story is important and he suddenly gets a text that pleases him, Franco is free. Peter says that this means thats now Maddox can’t tamper with Frankendrew’s brain.

At the Webber house, Cameron replays what happened in his head and if this whole thing is somehow his fault. Elizabeth tells him that none of this is his fault and they will remain a family. There is a ring at the doorbell and its Bobbie Spencer (Jaclyn Zeman) wonderings where Scott is. Elizabeth tells her that they lost the hearing and they embrace.

At the gym, Scott explains what happened at the hearing and how Dr Collins messed everything up for them. Scott asks Sonny to save his son before he leaves town forever, he needs to kidnap him. Scott says his son is already gone and he needs his help as a father.

Scott yells at Sonny and says that his son apparently does not matter even though he got Carly out of the looney bin. He leaves and goes to have drinks with Bobbie, who consoles him.

Jason shows up at Elizabeth’s house and Cameron is angry at him, he wants him to leave. Elizabeth intervenes and

Julian chats with Kendra who has decided to have a drink on her cheat day. Kim shows up at the bar and slaps Julian into next week, she realizes he told Scott about the attempted rape.

Franco shows up at the gym and Sonny lets him beat on a punching bag.

The Young and the Restless Rumor: Chelsea Goes Back To Her Old Ways – Simon Black Held Responsible?