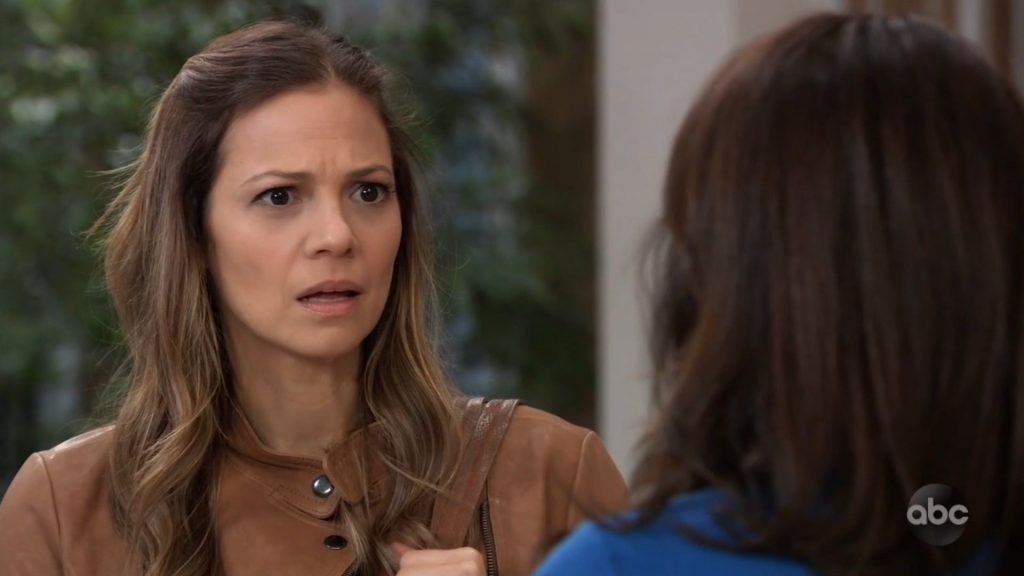 General Hospital’s Kim Nero (Tamara Braun) had planned to leave town with Julian Jerome (William DeVry) until she slept with Franco Baldwin (Roger Howarth). With Franco’s memory returning soon, could Kim be checking out of General Hospital for good? Rumor is that Tamara has already wrapped up taping at General Hospital and the roll has not been recast. Over the weekend Roger Howarth stated at an event that Franco would return in about two weeks. With both Drew Cain (Billy Miller) and Oscar Nero (Garren Stitt) gone, Kim has no reason to stay in Port Charles. How might Kim be written out?

General Hospital’s Kim has been all over the place since her son Oscar died. Will Kim follow through with her plans and leave town? Kim has been trying to get pregnant since Oscar’s death. Kim went as far as to drug Drew on the Haunted Starr to try to get pregnant during Franco and Liz Webber’s (Rebecca Herbst) wedding reception. Drew didn’t sleep with Kim but Franco, with Drew’s memory, did.

Could Kim be pregnant with Franco’s child and skip town since his memory has returned? Kim kept Oscar from Drew and raised him alone, it would not be shocking for her to do it again with Franco. Kim may feel that she’s come between Liz and Franco enough and want to leave to escape the drama.

GH Spoilers – Kim Nero Could Have A Breakdown

General Hospital’s Kim has been living in the past since Drew’s memory was transplanted into Franco’s head. At first Kim tried to resist Franco’s advances but eventually gave in when he kept pursuing her as Drew. Franco gave Kim the closure she needed in her and Drew’s love story. Kim even hired a lawyer to help Franco prove that he is Drew. Kim is thoroughly in love with Drew and has been for years. Franco has given her back the man that she loves and Kim wants to leave town with him.

Losing Drew again, even if it is through an implanted memory, could be too much for Kim to handle. Especially with the real Drew being declared dead by the WSB. Franco’s return could push Kim over the edge sending her to a mental institution. Kim would be offscreen if she were hospitalized in case Tamara decides to return at some point.

General Hospital’s Kim could easily be pushed to the point of suicide since she has been mentally broken for so long. Losing both Oscar and Drew could make Kim want to be with the two of them enough to harm herself. As a doctor, Kim would have access to several medications that could help her to end her life if she chooses. But would Kim go that far?

If Tamara is leaving GH, Kim will have to depart somehow. At this point, no one knows how this story will end or if Tamara is leaving. However, it will be interesting to see what manner Kim chooses to leave and if she will be back. Could Kim return in a few years with Franco’s child or will she ride off into the sunset looking for brighter horizons?

Some exciting scenes are coming up on General Hospital, airing weekdays on ABC so stay tuned. And check back right here often for all the latest, news, information and spoilers!