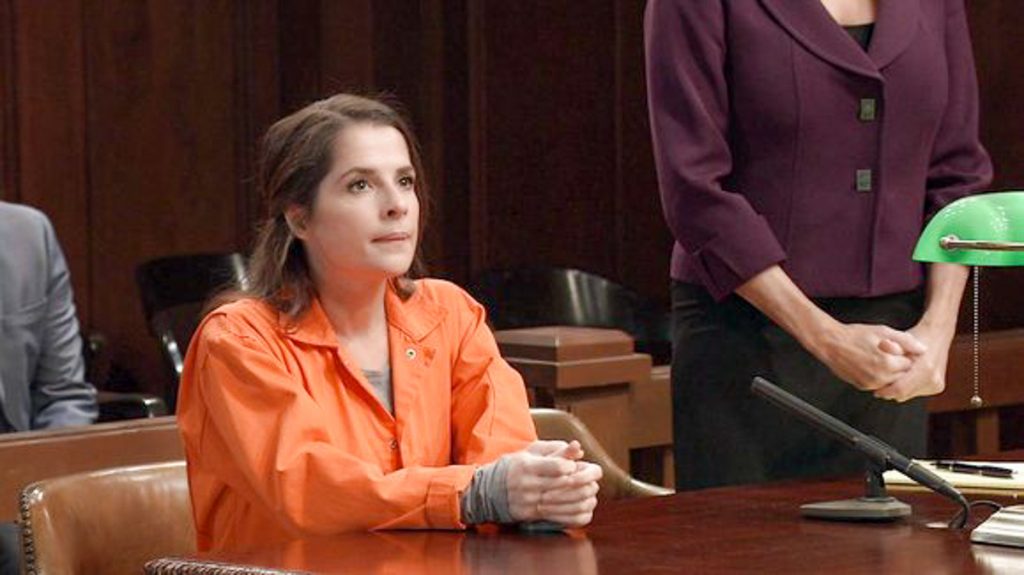 At Kim Nero’s (Tamara Braun) penthouse she is leaving when theres a ring at the door. Its Hayden Barnes (Rebecca Budig) who is supposed to be meeting an agent about seeing the apartment.

At Anna Devane’s (Finola Hughes) mansion, she is setting up a fancy candlelight dinner for two. Hamilton Finn (Michael Easton) walks in with a huge bouquet of flowers.

Brook Lynn Ashton /Quartermaine (Amanda Setton) is sitting at Charlie’s Pub refusing to leave. Julian Jerome (William Devry) opens the door and says she needs to get out now. Brook Lynn wonders why hes in such a rush, maybe he just needs her ear to listen to him.

Julian and Brook have drinks together while discussing their pasts and bad luck.

At General Hospital (GH) , Lucas Jones (Ryan Carnes) continues to yell at his husband Brad Cooper (Parry Shen) about lying. Lucas asks what Liesl Obrecht (Kathleen Gati) meant when she said the truth about Wiley’s father will come out.

Brad swears that Liesl has nothing over him and everyone is just jealous of their relationship.

At the Quartermaine mansion, Olivia Falconeri (Lisa Locicero) tells her husband Ned Ashton (Wally Kurth) that Sonny Is coming over. Sonny Corinthos (Maurice Bernard) arrives and Olivia has an envelope from the WSB. Olivia opens its and freaks out when she realizes all the letters she sent were returned unopened.

GH Spoilers – Sam McCall is given her sentence

In the PC courthouse, the judge hands down a sentence to Sam McCall (Kelly Monaco) – not guilty for murder! The judge says to hold up because shes not free yet, shes still guilty on manslaughter charges. Diane argues for a lesser sentence, but Sam gets a two year sentence with early parole available.

General Hospital Spoilers – Franco Baldwin has a change of heart

At General Hospital (GH) , Franco Baldwin (Roger Howarth) tells his wife Liz that they need to talk. Franco is confused why Liz did not tell him that Franco saved Drew when they were kids. Franco says that he has decided to reverse the procedure that made him Drew.

At her penthouse, Kim Nero (Tamara Braun) is at the door when Hayden Barnes (Rebecca Budig) shows up –she has rented her apartment. Hayden says she has a child and the place would be perfect for them. Kim goes to leave and drops a teddy bear on the floor.

Over a candlelit dinner, Hamilton Finn (Michael Easton) tells Anna Devane (Finola Hughes) about Alexis being sick and the outcome. He congratulates Anna on saving Charlotte from Cassandra.

Sam freaks out when she realizes she is going to prison. Her and Jason embrace as they say their goodbyes.

Julian thanks Brook Lynn for listening to him and offers her money. She storms out when she realizes he thinks shes a hooker.

Franco tells Liz that Kim is leaving on her own and hes going to do the procedure. Brad shows up at Charlie’s Pub, but Julian just stares and refuses to let him in. Olivia opens a note from Dante that tells her to not write him ever again. Suddenly the back door opens and its Brook Lynn – Ned’s daughter – she says “daddy Im home”….flash to preview