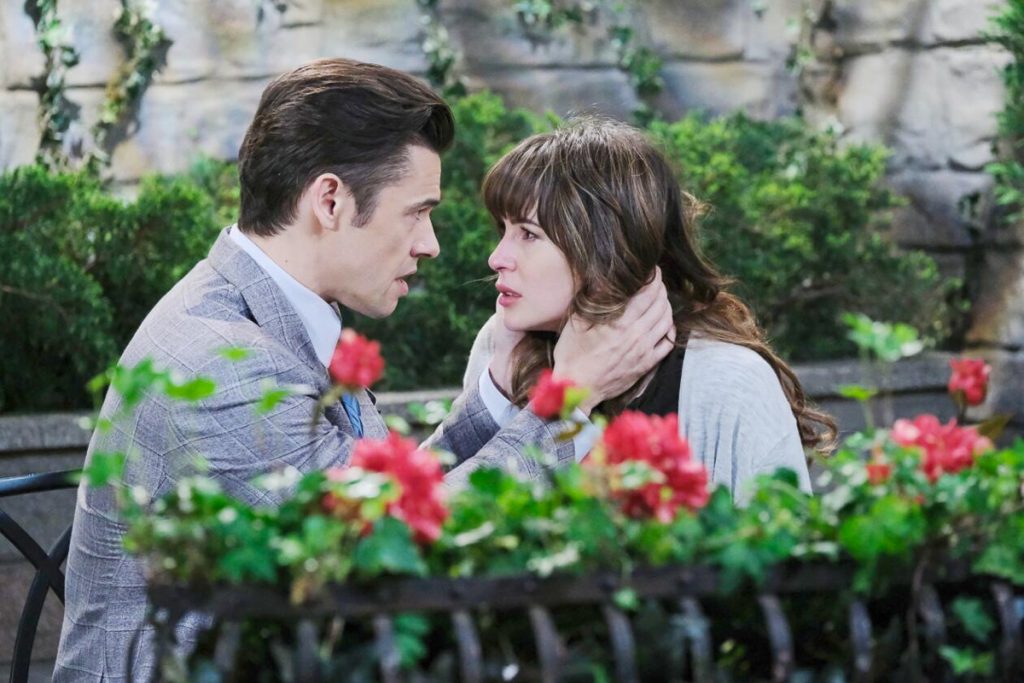 Days of Our Lives spoilers for Wednesday, November 20 tease another exciting day of drama for DOOL fans. Remember if your show is interrupted by the Trump impeachment hearings to check if it’s on COZI TV. If you don’t have that station then watch for it on the NBC app or NBC.com after 8:00 PM EST.

Sonny Kiriakis (Freddie Smith) confides to his former partner at Titan Industries, Chad DiMera (Billy Flynn) about his situation with his husband, Will Horton (Chandler Massey). As Days of Our Lives viewers know, Will is currently in prison as Ben Weston’s (Robert Scott Wilson) cellmate and apparently for killing Adrienne Kiriakis (Judi Evans), Sonny’s mother.

From what has been revealed so far, it sounds like it was an accident so why Will is in prison for it is so far a mystery. Will was the one who told Sonny to stop coming to visit because Will felt so bad about whatever happened. It sounds like Will may have hit her with his car.

In the prison, Ben has found out that his father, Clyde Weston (James Read) is in the cell across from his and Will’s! In conversation, Ben had told his father that he was innocent and he had not been the one to strangle his sister Jordan Ridgeway (Chrishell Hartley) but he unwittingly did tell him that Ciara Brady (Victoria Konefal) and he were working on his appeal and thought that Xander Kiriakis (Paul Telfer) had done it.

Days of Our Lives viewers will recall that earlier, Ben had asked Victor Kiriakis (John Aniston) to put a hit out on Jordan out of worry for Ciara, and then he changed his mind and told Victor not to put the hit, but that he may not have called it off after all. Since Victor had Xander kidnap him and tie him up Ben figured he had Xander kill Jordan too. He is horrified when Clyde tells him that he had an associate kidnap baby Mickey Horton (the May twins) as leverage over Xander!

Days of Our Lives Spoilers – A Frantic Sarah Horton Tells Xander Kiriakis Her Baby Is Missing!

A frantic Sarah Horton (Linsey Godfrey) tells Xander her baby is missing! She had been in Horton Town Square with Mickey in a carriage or stroller, was momentarily distracted, and then when she turned around Mickey was gone! Xander tries to calm her down, to no avail! He will be determined to find the baby and bring her back safely! It will be soon enough that he gets a communication from an unknown telephone number telling him in no uncertain terms what to do to ensure Mickey is returned safely!

Eve Donovan (Kassie DePaiva) has convinced Jack and Jennifer Deveraux’s (Matthew Ashford, Melissa Reeves) daughter, Abigail DiMera (Kate Mansi) to come and talk to her at the prison where she has been incarcerated for causing the fall that put Jennifer in a coma for a year. Days of Our Lives viewers will recall that on the day of Jack and Jennifer’s double wedding with Justin and Adrienne Kiriakis (Wally Kurth, Judi Evans) that Eve tried to stop the wedding by drunkenly stumbling into it and claiming she was pregnant with Jack’s child, and then the same day, when she had been drinking at Brady’s Pub, had told Roman Brady (Josh Taylor) that Jennifer should die!

So naturally, she was the prime suspect when Jennifer was pushed over the balcony railing of The Bistro, where the two couples were going to use Eli Grant (Lamon Archey) and Lani Price’s (Sal Stowers) reservations since they canceled their wedding when Lani unexpectedly dumped Eli. Jennifer doesn’t remember seeing Eve there before she was pushed although she did remember being pushed. Eve tells Abby that she was set up and to please investigate her mother’s fall more thoroughly and see if she can help bring her mother to remember who else she may have seen before her fall.