At General Hospital (GH) in a private room, Franco Baldwin (Roger Howarth) has been put under for the procedure as Dr Andre Maddox (Anthony Montgomery) begins to download the mind mapping info.

In the hallway of General Hospital (Gh) Laura Spencer (Genie Francis) stops a frantic Peter August (Wes Ramsey) as he enters the building. He asks if they can speak later and she says it can’t wait, its city business and its urgent.

At the Metro Court, Anna Devane (Finola Hughes) and Grifin Munro 9Matta Cohen) embrace as they greet each other. She tells him how great it is to see him and is sorry hes visiting under such poor circumstances.

Anna tells a surprised Griffin about the secret daughter Hamilton Finn (Michael Easton) had with Hayden Barnes (Rebecca Budig). They discuss her son Peter and how he is struggling to be happy. Maxie Jones (Kirsten Storms) pops by and says a quick hello. Anna says goodbye and that Duke would be so proud of him. 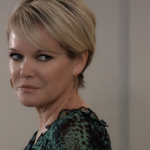 At the Jerome Gallery, Nina Reeves (Cynthia Watros) extends out her hand in a gesture to Ava Jerome (Maura West) that they should bring down the Cassadine “boys”. Ava is hesitant as Nina explains that they are on the same side. Ava wonders why she should trust her and thinks she is working with Valentin against her.

Nina tells Ava that she knows that Valentin fabricated that Sasha was her daughter and she wants revenge. Nina says all she wants is the codicil to Mikos Cassadines will.

At Jasper Jax’s (Ingo Rademacher) home the doorbell rings and its Valentin Cassadine (James Patrick Stuart). Valentin says he will fight back hard against Jax or they can pool their resources and both win. Valentin says they can work together to get the portrait as he looks around Jax’s home suspiciously.

Jax asks Valentin if hes surprised he got a wedding invitation, which Valentin brushes off. He wonders why he wants to get his hands on the Helena portrait.

Laura tells Peter about an early release prison story and he has not written anything about it in the Invader. She scolds him as he tries to get away – we know he wants to stop Franco’s procedure. Laura begs him to get the story on the website at least, as he hurries away.

As Andre Maddox begins the download procedure, a man busts in with a gun. Andre and the gunman begin fighting til Andre is knocked out on the floor. Suddenly Peter August arrives and picks up the gun off the floor.

In the waiting room, Liz, Scott, and Cameron suddenly hear a gunshot. Anna comes out the elevator, pulls out her gun and runs down to the operating room. Anna and Liz find Peter who says he just happened to be walking by, they also attend to Andre who seems okay.

Valentin tells Jax that he knows deep down that he secretly likes Nina. Laura runs into Griffin and explains all the drama that has happened while he was gone. Nina tells Ava that they both have sadness in commons and shes so sorry for how she has treated her in the past. Ava reveals to Nina where the Helena portrait is hidden Andre explains to everyone what happened and Peter says he had an intuition that something was wrong. Nikolas realizes that his ring fell off when he was seeing Ava in Shadybrook. Andre says the procedure is complete as Liz tries to wake up Franco ……flash to preview

Some exciting scenes are coming up on General Hospital, airing weekdays on ABC. And don’’ forget to check back here regularly for all your General Hosptial news, information and spoilers!