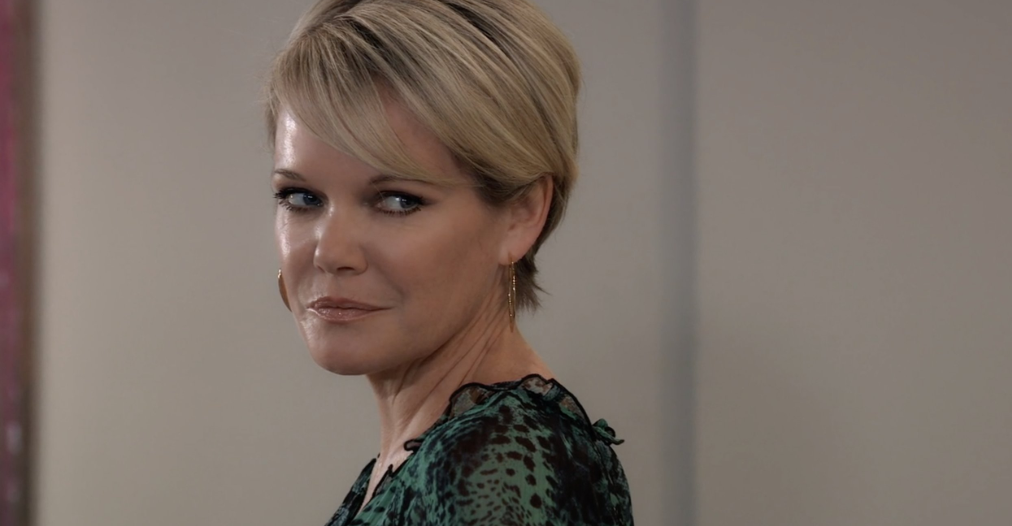 In the waiting room near where Franco Baldwin (Roger Howarth) has been prepared to undergo the memory transfer reversal procedure by Dr. Andre Maddox, (Anthony Montgomery) Franco’s father, Scott Baldwin (Kin Shriner), wife, Elizabeth Baldwin (Rebecca Herbst) and stepson Cameron Webber (William Lipton) talk about the procedure and wait and pray for everything to be successful. Cameron asks what they think is going to happen when he gets into that operating room.

At the Metro Court, Maxie Jones (Kirsten Storms) updates her old friend Dr. Griffin Munro (Matt Cohen) on the happenings in her life since he has been away from Port Charles. She is obviously talking about Peter August (Wes Ramsey) and their moving in together, which is happening today since she tells the former priest that as of today they are officially living in sin! Griffin doesn’t seem bothered by the fact and will likely wish her well and, of course, she will also show him the latest pictures of James West (Kyler and Caleb Ends)!

Nina Reeves (Cynthia Watros) has come looking for Ava Jerome (Maura West) in her gallery after Shadybrook told her Ava had been released. Ava is perhaps a little nervous about Nina’s suggestion that they join forces to take down those “lying Cassadine men!” Nina tries her best to convince Ava that she is on her side, now that she has convinced her that Nikolas Cassadine (Marcus Coloma) is alive since Nina found his Cassadine crest ring under Ava’s bed at Shadybrook!

Valentin Cassadine (James Patrick Stuart) has shown up at Jasper “Jax” Jacks’ (Ingo Rademacher) house just as he was evicting Nikolas, who was very upset about losing his ring and didn’t want to leave till he found it! Nikolas may still be lurking somewhere out of sight and eavesdropping on Jax and Valentin’s conversation, as Valentin tries to make a deal with Jax – telling him if they pool their resources, then they both win!

Back at General Hospital, Peter is doing his darndest to try and get away from Laura Collins (Genie Francis) who needs to speak to him about an urgent matter; at least it is urgent to her! Peter impatiently asks if they can speak later, and Laura tells him very adamantly, “No we can’t!”

Peter will be sabotaged in what he is trying to get accomplished because Laura cannot wait! General Hospital viewers will recall in Monday’s episode that he was trying to get away from his mother, Anna Devane (Finola Hughes) who had also wanted to talk to him and he complained that his contact for an important story he was working on had ghosted him! The goon he hired to kill Andre and Franco had blocked Peter’s cell phone number and thrown the phone he had in a trashcan and went off on his own to kill Andre and Franco!

Meanwhile, an assassin with a gun enters the operating room where Andre just injected Franco’s IV with a sedative in preparation for the memory transfer reversal procedure! This, of course, is Peter’s goon he was trying to get in touch with and possibly Peter was trying to stop, having changed his mind at the last minute! Thanks to Laura, now it may be too late!

Stay tuned to GH and keep checking General Hospital Spoilers frequently for all the latest news, updates and developments!