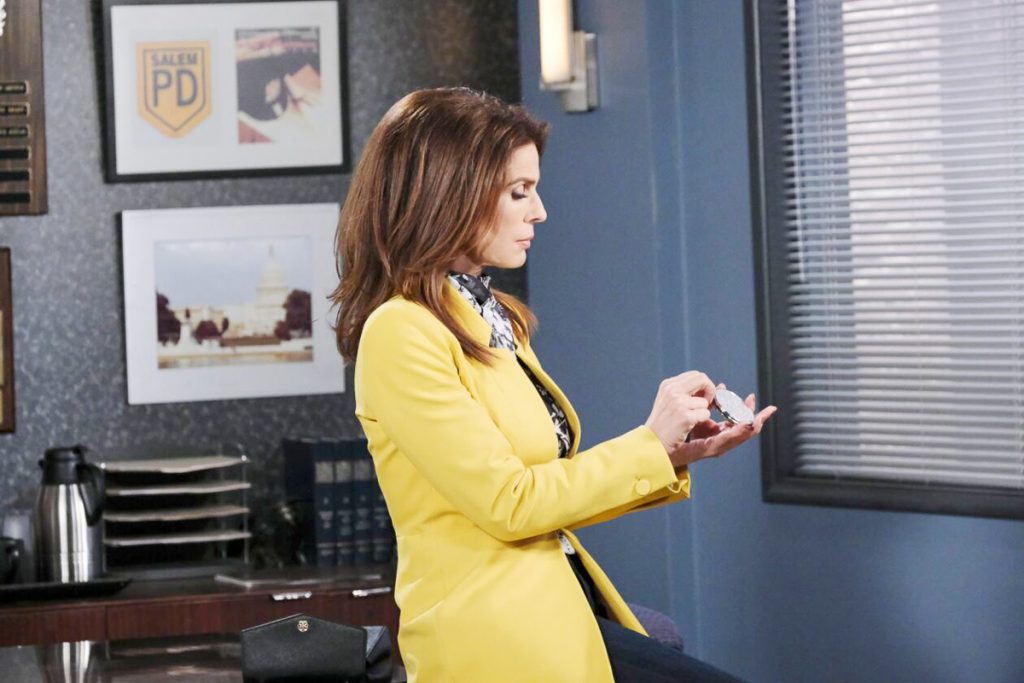 “Hope Brady” (Kristian Alfonso), who Days of Our Lives viewers know has been Princess Gina Von Amberg (Kristian Alfonso) for over a year, is tempted to eliminate Abigail DiMera (Kate Mansi). Abigail is simply asking too many questions and raising too many doubts about Eve Donovan (Kassie DePaiva), who “Commissioner Hope Brady” made sure would take the fall for her own crime, which was attempted murder of Jennifer Deveraux (Kassie DePaiva) by pushing her over the balcony railing of “The Bistro”.

As Days of Our Lives viewers will recall, Jennifer had realized that Dr. Wilhelm Rolf (William Utay) was going to turn Hope into Princess Gina – but the problem was, she already had! Princess Gina must keep her identity a secret at all costs, and she realized she may have to eliminate Abigail to keep her from finding the truth!

Justin Kiriakis (Wally Kurth) has decided to move in with Kayla Brady (Mary Beth Evans) into her new condo. They decided that the Kiriakis mansion was too crowded, and there was not enough privacy, and the house she once shared with Steve Johnson (Stephen Nichols) had too many sad memories, and for that matter so would the Kiriakis mansion, but for Justin. This way in a new place they can be a new couple making their own new memories, and ghosts from the past will not interfere but be remembered fondly in their memories.

Eric Brady (Greg Vaughan) and Sarah Horton (Linsey Godfrey) receive very upsetting news about baby Mackenzie “Mickey” Horton (the May twins). They find out that she has neuroblastoma, a form of a cancer that develops from immature nerve cells found in several areas of the body. Neuroblastoma most commonly arises in and around the adrenal glands, which have similar origins to nerve cells and sit atop the kidneys.

Her doctor will select a treatment plan based on several factors that will affect the baby’s prognosis, including her age, the stage of the cancer, the type of cells involved in the cancer, and whether there are any abnormalities in the chromosomes and genes. Sarah will understand more of these procedures and what the tests and treatments mean than Eric, and if it is grim news it will be harder on her than it is on him.

Days of Our Lives #DOOL Spoilers: Gabi Tries to Evict Chad From Mansion, But DiMera Puts Up A Fight @celebratesoaps https://t.co/MmUDnEwP3e

Ben Weston (Robert Scott Wilson) informs Ciara Brady (Victoria Konefal) that his legal situation just got worse. How much worse it could get than being on Death Row and having only one more appeal is questionable, but perhaps when he saved Will Horton (Chandler Massey) from being stabbed to death by his father Clyde Weston (James Read) he lost that one more appeal! Clyde holds way more power than he should in Statesville Penitentiary!