General Hospital’s Jason Morgan got away from Shiloh Archer (Coby Ryan McLaughlin) and saved Sam McCall (Kelly Monaco). However, Cameron Webber (William Lipton) has found himself at Shiloh’s mercy and in deep trouble. Will Franco Baldwin (Roger Howarth) risk his life with Liz Baldwin (Rebecca Herbst) to save her son from an unknown fate?

General Hospital’s Cameron is just a kid, and Dr. Cabott (Time Winters) might have an issue putting the memories of a Navy Seal in this kids brain. Could Dr. Cabott refuse to use Cameron forcing Shiloh to find another subject?

Would Dr. Cabott ruin the life of a teenager to access money when the procedure may not even work on him? Can the flash drive be used more than once? If this is a one time chance, is it worth the risk to lose the information that can lead to the money Shiloh and Cabott want so badly? 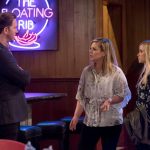 General Hospital Spoilers – Franco Is Close to Cameron And Drew

General Hospital’s Franco is close to both Drew and Cameron. Franco could save Cameron and let Drew know what his memory contains that could take down Shiloh. Will Franco agree to the brain mapping to save Cameron, or will he be forced into the procedure because Cabott refuses to use a child in the experiment? With Franco’s past, could he do something so selfless? Would Franco have to be forced into this procedure to save his stepson?

General Hospital Spoilers – How Will Liz Handle This News?

General Hospital’s Liz could be facing not only her son’s kidnapping but the possible loss of her husband. Cameron has disappeared from his community service, which could get him in trouble with the judge. Now Franco may end up with someone else’s memories and have feelings for another woman instead of his wife. How will Liz handle the possible loss of her husband? Will Cameron survive Shiloh? Will Franco come out a hero?

General Hospital writers have tried to redeemed Franco to fans for years, will this be the storyline that does it or is Franco still going to be unredeemable to some?

Days of Our Lives Spoilers: Gilles Marini Teases Ted Could Have A Twin