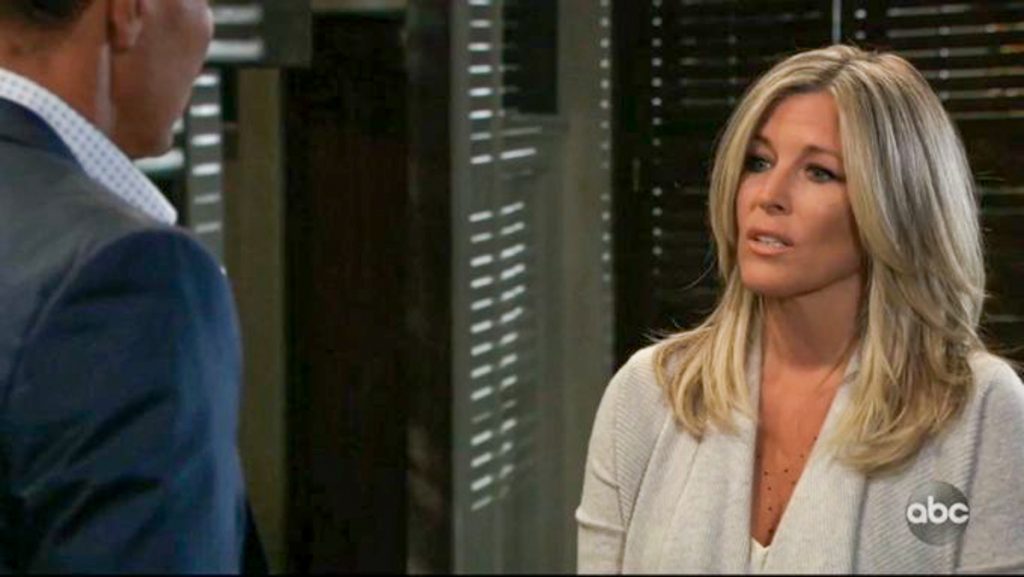 Welcome to your Thursday, November 7th General Hospital (GH) recap! We begin our day in the woods where Sam Mccall (Kelly Monaco) and Cassandra Pierce (Jessica Tuck) are doing prison work detail. Curtis Ashford (Donnell Turner) comes by to check on Sam and is surprised Cassandra is her cellmate.

At the cemetery, Nina Reeves (Cynthia Watros) is kneeling over her brother Nathan’s grave. She begins crying and tells him about all the drama with Sasha.

In Jasper Jax’s (Ingo Rademacher) new home, Nikolas Cassadine (Marcus Coloma) ponders the weather change in Port Charles. He tells Jax that the sooner they find the codicil, the sooner he can leave town. There’s a knock at the door and its his daughter Josslyn Jax (Eden McCoy)

At Kelly’s Diner, Carly Corinthos (Laura Wright) is watching her nephew Wiley and telling him how fun it is to hang out. Her son Michael Corinthos (Chad Duell) comes in and she asks what’s new in his life as Sasha walks in behind him. Carly asks them to sit with her and she gets a call from Jax about Josslyn.

In Pentonville prison, Nelle Benson (Chloe Lanier) meets with her lawyer Martin Gray (Michael E Knight). Martin says in his research he found out something he did not know, that she has a husband. Nelle says her husband’s biographical info may not be seen in a favorable light and she explains she is a widow.

Valentin Cassadine (James Patrick Stuart) shows up and Nina Reeves (Cynthia Watros) asks what he’s doing there. He says he was worried about her and could always leave if she prefers. Nina says she needed to vent to someone and asks Valentin what’s bothering him.

At the prison work area, Curtis Ashford (Donnell Turner) says Sam should be careful being so close to Cassandra Pierce (Jessica Tuck). He worries about her connection to Valentin, which equals danger. Cassandra and Sam argue about the hard labor they are doing, she calls her a bitch.

Curtis shows up at Kelly’s and asks Sasha what the real truth is about what happened. He ran the samples again and they come up as a close match.

Valentin Cassadine tells Nina Reeves that Laura Spencer is never going to back off of him about Nikolas’s death.

Nelle Benson tells her lawyer that he needs to get her out of prison as soon as possible. After their meeting, he calls Valentin and says the project is moving forward.

Cassandra Pierce knocks out the cop watching them with a shovel and runs to a van which is being driven by Nikolas. She notices he’s going an odd way to the airport, he insists he’s just going a back way and for her not to worry ………flash to preview