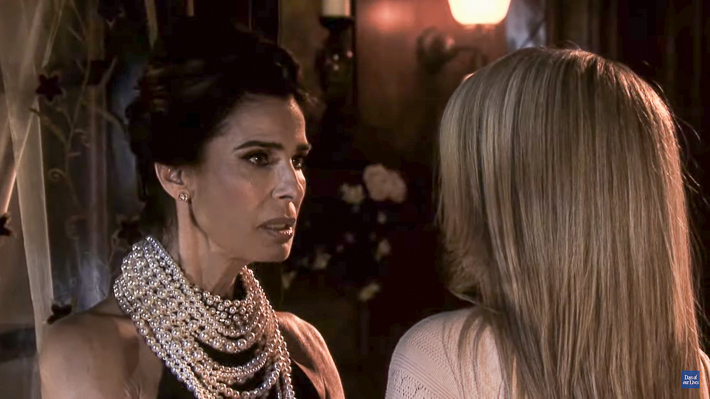 Days of Our Lives spoilers for Friday, November 8 tease that the day the hourglass moves one year ahead will be full of surprises, shocks, confrontations and drama for Days Of Our Lives fans!

At the gatehouse on the DiMera mansion property where he lives, Ben Weston (Robert Scott Wilson) makes a horrific discovery; a dead body! Viewers will remember from Thursday’s episode that Ben had a nightmare that he had killed his sister, Jordan Ridgeway (Chrishell Hartley). Has he woken up from his nightmare, or was the nightmare something that really happened? Did he kill his sister in his sleep, or is it someone else’s dead body? All odds are that it’s Jordan’s!

It would seem that Nicole Walker (Arianne Zucker) may have worried over nothing about whether or not to tell Eric Brady (Greg Vaughan) that Sarah Horton (Linsey Godfrey) is pregnant with his baby! It will turn out that Kristen DiMera (Stacy Haiduk) is the one who drops the big baby bomb on Eric and beats her to the punch! Something tells Days of Our Lives viewers that Xander Kiriakis (Paul Telfer) will not be happy with his former partner in crime either, but what will Eric do now?

John Black (Drake Hogestyn) and Dr. Marlena Evans (Deidre Hall) mark their one year wedding anniversary in the aftermath of one wedding Marlena was officiating at not happening, and one of the other two happy couples experiencing a tragedy with Jennifer Horton Deveraux (Melissa Reeves) now in a coma from a horrific fall from a balcony! Better get those strawberries and cream tested ahead of time, Marlena, to make sure they are safe to eat!

Princess Gina VanAnhalt, which viewers know is really Hope Brady under mind control (both played by Kristian Alfonso) tries to ensure that Jennifer never wakes up; she will probably sneak into Salem University Hospital where Jennifer lies in a coma, and plan to disconnect her life support, or will she think injecting a toxic substance into the IV be more exciting? Either way, she knows she has to silence Jennifer forever because she knows too much and could be a threat to Princess Gina’s own “life”!

At Salem University Hospital, John brings Jack an hourglass that he tells Jack helped him keep his sanity when Marlena was in a coma. John tries to comfort Jack and all of Jack and Jennifer’s family and friends (except Hope, of course, who has been turned into Princess Gina) pray for her recovery! Jack takes the hourglass and decides to turn it over, and ——time in Salem jumps ahead for one year, and everything that happens from now on will either be in the future or shown as a flashback from the past!