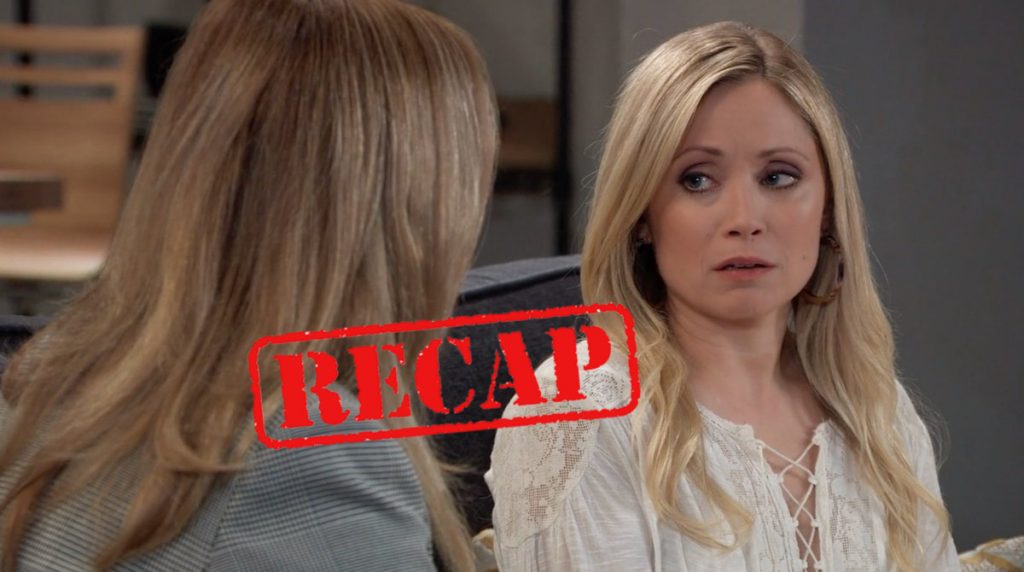 Welcome to your Monday July 22nd General Hospital (GH) recap! We begin our day at Jordan Ashford (Brianne Nicole Henry) and Curtis Ashford’s (Donnell Turner) home where she is going through a list of chores they need to do. They begin to kiss as Aunt Stella (Vernee Watson) comes to the door and interrupts.

At Sonny Corinthos’’s (Maurice Bernard) mansion, Olivia Falconeri (Lisa LoCircero) busts in upset and says she needs to talk to him. Their son Dante shot Maxie’s boss, Peter August (Wes Ramsey).
In Lulu Falconeri’s (Emme Rylan) living room, she is looking over the divorce decree from Dante. Her mother Laura Spencer (Genie Francis) is surprised to hear that Dante filed due to desertion.

At Crimson, Nina Reeves (Cynthia Watros) and Maxie Jones (Kirsten Storms) are screaming and giving each other high fives. The cover story on Ava Jerome (Maura West) will be featured on a local TV show. Jasper Jax (Ingo Rademacher) walks in and has champagne for them.

Jax says if Ava has a problem with the article, he can deal with her. He also asks Nina why she glossed over so much of Ava’s past in the article? Nina defends what happened between Nicholas, Ava and Valentin and say it was an accident, not murder.

Valentin Cassadine (James Patrick Stuart) and Ava Jerome (Maura West) share an elevator and he asks about Sibley the psychic and if she is reliable. She seemed to know a lot about him when they ran into each other. Ava says that he has share of sins and she watched him do one of them, killing Nicholas Cassadine.

Valentin says what she saw was an accident and she signed an affidavit agreeing to it. Maxie comes out into the hall and sees them, Ava asks if she can get an advanced copy of the magazine.

Alexis Davis has a therapy session

In Dr Neil Byrne’s (Joe Flanigan) office, Alexis Davis (Nancy Lee Grahn) is having her therapy appointment. She is still trying to figure out why her daughter Kristina Davis was drawn to Shiloh. Dr. Byrne tells her that not everything is about her.

Jason Morgan, Drew Cain and Shiloh Archer have it out

At the Floating Rib, Shiloh Archer (Colby Ryan McLaughlin) is flashing back to his time in Afghanistan. He sees “Drew Cain” yelling at him, but he has Jason Morgan’s face. Drew says his car was hit by a bomb and “Hank” says “you saved me” in which Drew replies “my mistake.”

“Drew” calls him scum, but says he’s a civilian and needed to rescue him. In present day, Drew Cain (Billy Miller) confronts Shiloh and tells him to never mention his son Oscar again. Drew shoves him against the bar as Curtis runs in to break up the fight.

Shiloh keeps drinking and flashes back to Afghanistan where Drew tells him he in legal trouble for stealing fuel and trying to sell it.

Aunt Stella (Vernee Watson) arrives at their home and has healthy groceries for them. Curtis heads out to get some food for a barbecue while Jordan stays behind. Jordan asks Stella if she is ready to look for her long lost relative and she would like to help. Stella gets irate and says she is not interested in looking, she has made her peace.

Lulu Falconeri frets about the divorce

Lulu Falconeri (Emme Rylan) is in a complete panic about Dante and the divorce papers. She asks her mom what she will do about telling the kids that the divorce is happening? Laura says that she can fight him on the divorce if she chooses to.

At the Corinthos mansion, Sonny tells Olivia she is not making any sense. She tells Sonny that he tried to shoot and kill Peter August (Wes Ramsey) at the WSB office.

Sonny and Olivia arrive at Lulu’s house while she’s having a total meltdown. They realize that what they heard about Dante must be true. Olivia is upset about what happened with Dante and his PTSD.

Jax is angry at Nina for not mentioning in the article all the crimes that Ava has committed. Nina lists dangerous women she knows and mentions Cassandra Pierce, right as Valentin walks in.

Lulu says she is contemplating accepting Dante’s divorce decree and Laura says it’s their job to support her. Olivia thinks they need to reach Dante and try to save him.

Shiloh continues to flash back to Afghanistan where Drew is yelling at him and listing his crimes. Shiloh mentions Kim which puts Drew in a rage. In present day, Shiloh contemplates if he should tell Kim the truth about Drew’s real feelings…….flash to preview