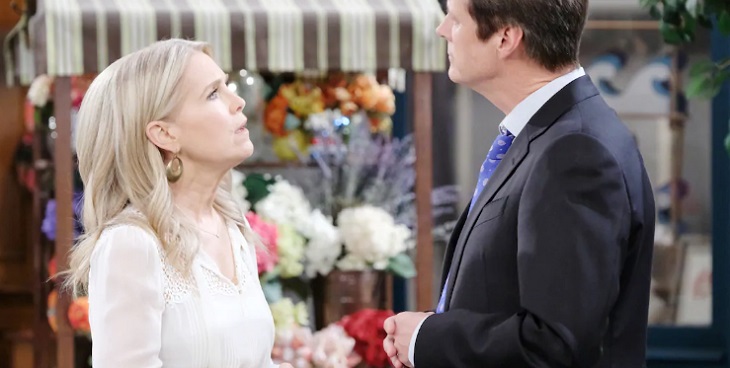 Days of Our Lives spoilers for Tuesday, July 23 finds Lani Price (Sal Stowers) questioning Ted Laurent (Giles Marini) about some of the inconsistencies of his statement. Also, Stefan DiMera (Brandon Barash) attempts to bargain with Kate Roberts (Lauren Koslow), knowing that things might not work out his way while Xander Cook (Paul Telfer) decides to end his alliance with Kristen DiMera (Stacy Haiduk) after she threw him under the bus, which subsequently led to his arrest.

Days of Our Lives Spoilers – Stefan Bargains With Kate

Apparently, Kate is willing to sit down and hear what Stefan has to say as the two of them try to bargain things out. But this only happens after Kate accidentally knocks Sarah Horton (Linsey Godfrey) out. That’s because she might have overheard something that she shouldn’t have heard.

Meanwhile, Gabi Hernandez (Camila Banus) is frustrated that Kate won’t come clean and tell her who was behind her kidnapping. However, Gabi lets Stefan know that she’s made some progress, even though it might not be enough. Nevertheless, Stefan is grateful that he’s got someone like Gabi by his side as they continue to strengthen their bond and their relationship.

Speaking of secrets, Lani grills Ted in the hopes that she can find out more information about his sudden disappearance and kidnapping. But just like Kate, Ted is refusing to give more details than he needs to. Knowing all too well what the consequences might be, Ted refuses to make Lani’s job any easier on her. That’s because he wants to protect those that he loves, including his new girlfriend Hope Brady (Kristian Alfonso).

Elsewhere, Brady Black (Eric Martsolf) is continuing to apply pressure on Xander Cook. Now that he has his arrest behind him, Xander is looking to turn a new page but it doesn’t look like that’s going to happen anytime soon. That’s because Brady is looking to kick him to the curb.

After all, he’s always looked for a reason to kick Xander out of Titan Enterprises and now he has one. Seeing how things are spiraling out of control for him, Xander will decide to cut all ties with Kristen. She’s been nothing but bad news for him, anyway.

Also, Rex Brady (Kyle Lowder) will decide that it’s finally time to move out of the apartment that he has been sharing with his brother Eric Brady (Greg Vaughan). Now that he’s a married man, it’s getting a little too crowded in their ‘Three’s Company’ arrangement.

Jack Deveraux (Matthew Ashford) will also decide to make some changes in his life, but it might be too little, too late. That’s because Jennifer Horton (Melissa Reeves) has already moved on. Jack’s wife Eve Donovan (Kassie de Paiva), meanwhile, will do everything she can to make sure that he doesn’t regain his memories back.