Welcome to your Monday December 9th General Hospital (GH) recap! We begin our day at the Metro Court hotel where Peter August (Wes Ramsey) is telling someone on the phone that the mind mapping reversal must be stopped at all cost. Suddenly his mother Anna Devane (Finola Hughes) approaches and says she can tell he has something on his mind.

At General Hospital (GH) a strange man is watching Elizabeth Webber (Rebecca Herbst) and Franco Baldwin (Roger Howarth) from across the room. Franco tells Elizabeth that she seems calm for whats about to happen and she says she will always be grateful to him for taking this risk.

At the Jerome Gallery, Trina Robinson (Sydney Mikayla) is trying to figure out what exactly was stolen when Cameron Webber (William Lipton) appears. He offers to help her as Ava Jerome (Maura West0 appears and is upset someone was messing with her things.

At the Metro Couty, Nina Reeves (Cynthia Watros) is looking at the ring she found in Ava’s room of the ring that belongs to the supposedly dead Nikolas Cassadine. Valentin Cassadine (James Patrick Stuart) joins her at the table and apologizes for not coming home the night before, he got caught up the gallery scheme.

Valentin tells Nina about the man in the mask who showed up and they had a fight at the gallery, but he escaped.

At Jasper Jax’s (Ingo Rademacher) house theres a knocking at the door, its Nikolas Cassadine (Marcus Coloma) trying to get in. Jax lets him and says hes opted out of their agreement as he hands him two garbage bags of his clothes.

Nikolas tells Jax what happened at the gallery and his fight with Valentin. 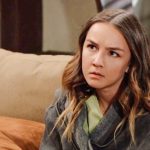 Peter August 9Wes Ramsey) tells Anna Devane (Finola Hughes) he was on a work call and that today is the day he moves in with Maxie and baby James. Peter says its going to be tough moving all of his stuff into Maxie’s place, they have a lot of things.

Anna and Peter sit at the bar and she tries to tell him he is not his father’s son anymore. Anna tells him that she can tell its not the stress of moving day, something else is wrong.

At General Hospital (GH) Doctor Andre Maddox (Anthony Montgomery) sits with Franco and Elizabeth to explain the upcoming procedure. Franco’s dad Scott Baldwin (Kin Shriner) shows up to offer his support. Cameron and Trina show up at the hospital to be there for the procedure.

Trina says someone broke into the safe, but Ava said nothing was taken. She gives Cameron and Trina some money to go out and enjoy themselves for the afternoon. Trina tells her she has a bunch of missed messages from her brother Julian Jerome.

Ava thinks she hears Trina back in the gallery, but its Griffin Munro (Matt Cohen). She tells Griffin that today is her re-entry into the world and she hopes he doesn’t view her as a threat to the world.

Jax tells Nikolas that Hayden’s phone is out of service and he is worried about her.
Griffin tells Ava hes trying to do better in his life, be of service to people a she carries Kiki in his heart.

Nina comes by the gallery after Griffin has left and shows Ava the Cassadine ring with the special crest. She says they need to join forces to bring down the Cassadine boys once and for all.

Franco is taken away by Andre for the procedure as Elizabeth and Cameron say their goodbyes.

Andre administers the serum to Franco as the gunman lurks outside the door……..flash to preview