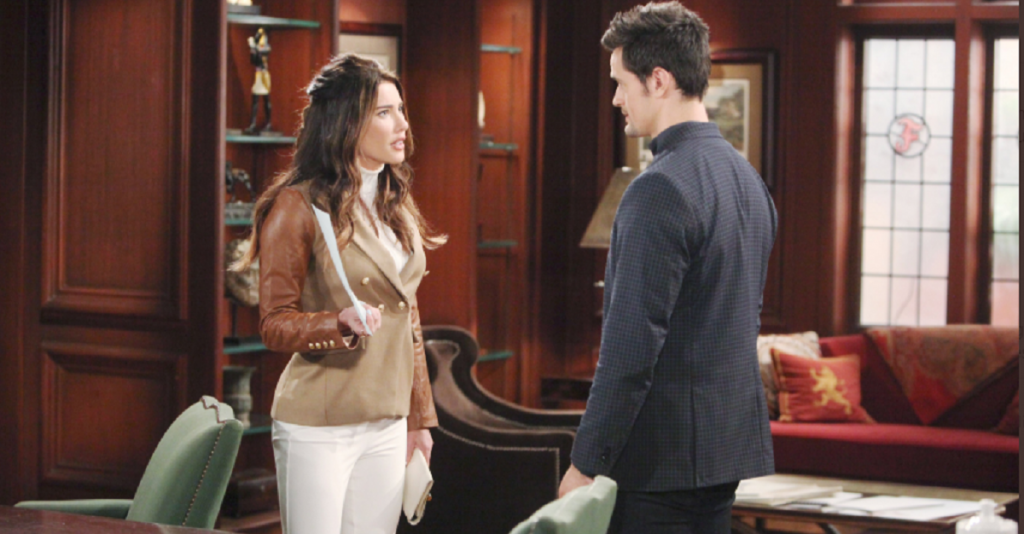 The Bold and the Beautiful (B&B)  spoilers for Tuesday, December 10, tease that the action is really heating up. But before we get to that, we have a quick programming note. The impeachment hearings preempted B&B on Monday, so the episode that would have aired then will now air on Tuesday, assuming there are no more interruptions. Here, we have a preview of what you can expect to see on Tuesday’s episode, assuming it airs as scheduled.

First off, Steffy Forrester (Jacqueline MacInnes Wood) will tell her brother Thomas Forrester (Matthew Atkinson) to stay in his own lane where Hope Logan (Annika Noelle) is concerned. As B&B viewers know, Thomas and Douglas Forrester (Henry Joseph Samiri) recently implored Hope to come back to Forrester Creations and work on Hope For The Future, with Thomas as the lead designer. Thomas even got Douglas to draw a cute picture for Hope to entice her back.

Well, Steffy found out about Thomas’ little manipulation and she wasn’t happy about it. Steffy is frustrated that Thomas won’t let go of his obsession with Hope, and she wants him to just cool it and get his life together. On Tuesday’s B&B episode, Steffy will fume at Thomas and tell him to lay off Hope – after all, Hope is in a relationship with Liam Spencer (Scott Clifton) and doesn’t need or want Thomas.

But it looks like Thomas will fire right back at Steffy, arguing that what he’s doing will ultimately benefit Steffy, too. Of course, Thomas wants Steffy and Liam to be together, and he’s gunning to be with Hope so that Steffy can be with Liam. It will irritate Steffy, who’ll tell Thomas to move on and take the second chance at life he’s been given.

Meanwhile, on Tuesday’s new episode of B&B, Brooke Forrester (Katherine Kelly Lang) will finally respond to Ridge Forrester’s (Thorsten Kaye) big request. As B&B viewers know, Ridge just asked Brooke to reunite with him. Although he has divorce papers in hand, he doesn’t want to sign them – he’d rather that Brooke agree to forgive Thomas, just as he’s decided to forgive Brooke for withholding Thomas’ “death” from him.

Unfortunately for “Bridge’s” marriage, Brooke’s response won’t be what Ridge is hoping for. As far as Brooke will be concerned, the only way that their marriage will be able to go forward is if Ridge opens his eyes about Thomas. Might she suggest that Ridge turn his back on his son as a condition for her to stay in the marriage? According to B&B spoilers, Brooke will have demand of her own, and it won’t be something that Ridge is willing to do.