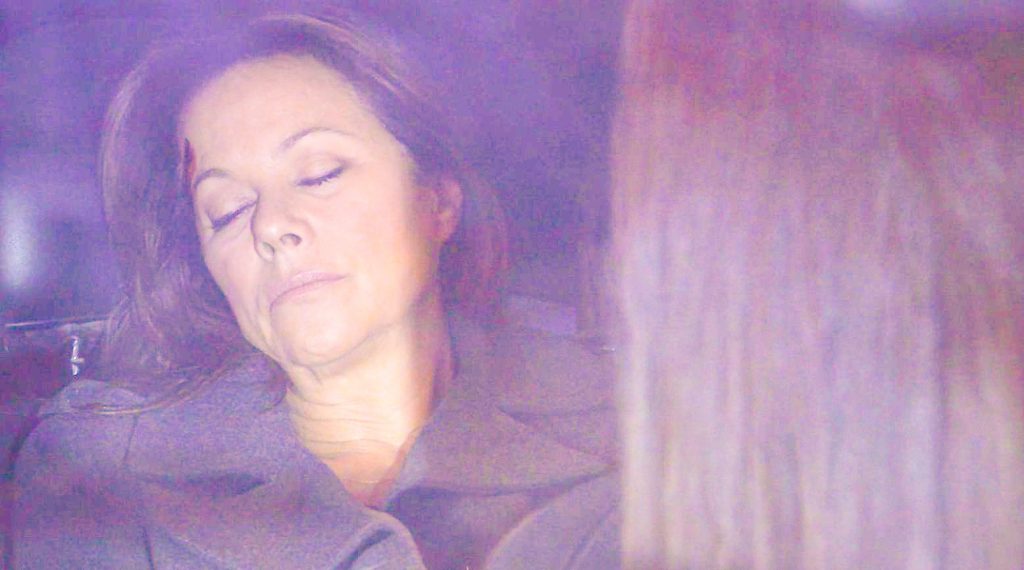 Welcome to your Monday December 2nd General Hospital (GH) recap! We begin our day at Anna Devane’s (Finola Hughes) mansion on Thanksgiving where she answers the door and it’s her ex husband Robert Scorpio. They welcome him in and he says hello to Violet who recognizes him.

At General Hospital (GH) Franco Baldwin (Roger Howarth) tells Elizabeth Webber (Rebecca Herbst) that he is having Thanksgiving at the Quartermaine’s house.

At the Quartermaine mansion, Brook Lynn (Amand Setton) is messing with a Thanksgiving decoration and Monica Quartermaine (Leslie Charleson) asks what she is doing? Monica says it’s her house and she allowed Olivia Falconeri (Lisa Locicero) to decorate how she pleases.

At their home. Lucas Jones (Ryan Carnes) is asking Brad Coper (Parry Shen) again to tell him the truth. Brad says that the problem is Obrecht and he should have never gotten involved with her. Brad swears up and down that he is not cheating.

At the Corinthos mansion, Michael Corinthos (Chad Duell) , Josslyn Jax (Eden McCoy) and Dev Cerci (Ashton Arbab) are playing cards. Michael says that Josslyn is a pro and can probably beat anyone. The doorbell rings and its Sasha Gilmore (Sofia Mattsson) who is joining them for Thanksgiving.

Carly goes out on the porch to check on Sonny who is upset for having to send Mike away.

General Hospital Spoilers – Alexis Davis is attacked in the cemetery

After the brutal attack by Kendra in the cemetery, Alexis Davis (Nancy Lee Grahn) has been kidnapped. At General Hospital (GH) Neil Byrne (Joe Flanigan) is in a panic trying to reach Alexis, he decides to call the police.

Kendra goes into the car and injects Alexis with a needle which causes her to jolt awake.

GH Spoilers – Franco Baldwin is trying to find his ‘way”

At General Hospital (GH) Franco tells Elizabeth that hes going to go by Oscar’s meadow to say goodbye. She thanks him for the sacrifice he is about to make for her and her family. Epiphany tells Elizabeth what a brave thing it is he is doing for them all and himself.

Robert thanks Anna for inviting him to dinner and Finn interjects that the invite was from both of them. In the living room, Andre Maddox (Anthony Montgomery) is explaining the mind mapping procedure reversal to Maxie Jones (Kirsten Storms) and Peter August (Wes Ramsey).

Monica asks Olivia what is wrong with her and Olivia says she is avoiding any fights wth Brook Lynn. Monica says that Brook Lynn is just like her grandmother Tracy and she will be trampled if she does not fight back.

The door opens and Lulu Falconeri (Emme Rylan) and Rocco show up for the dinner, Brook Lynn immediately goes in for the attack. Ned asks what Lulu and Rocco what they did today and he lets its slip they went to the parade with Mr Phillips. Lulu and Brook Lynn go outside and argue about Dante and the marriage failing.

Brad and Lucas continue to yell at each other til he gets a phone call. Carly invites them both to Thanksgiving and they get in the car (rigged to crash by Julian).

Kendra explains to Alexis how important Keifer was to their family and that he did not deserve to die. Kendra takes Alexis and puts her in the middle of the road and says she will suffer the way her brother did.
Neil and Julian try to work together to find where Alexis could be, with no luck.

Lulu and Brook Lynn continue to scream at each other about past grievances. Olivia screams that her Thanksgiving meal is missing – we get a flash of Monica giving it to Epiphany to take to the GH staff. The family sings the traditional Thanksgiving song.