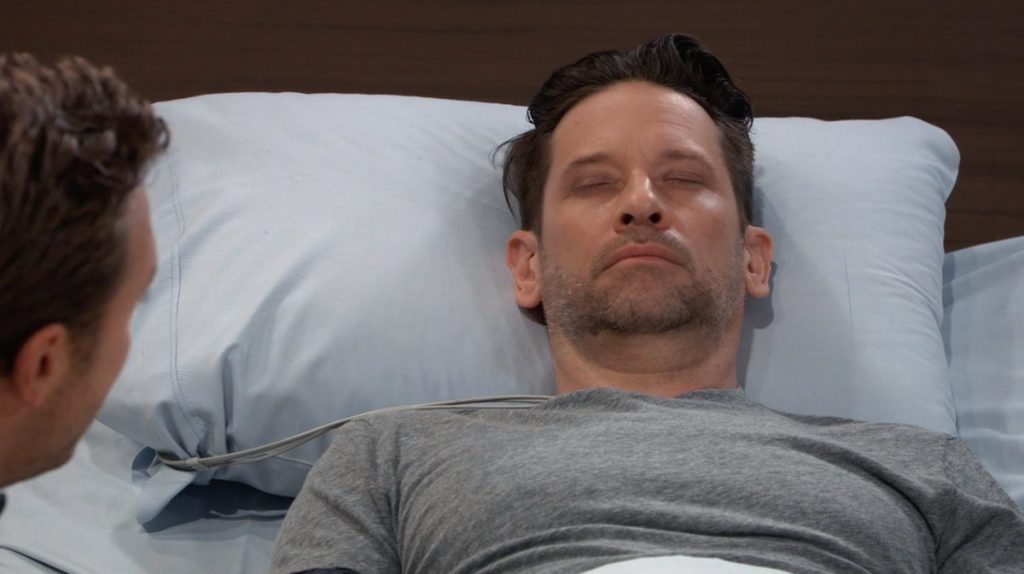 Welcome to your Monday, August 12th General Hospital (GH) recap! We begin our day at the retirement home where Mike Corbin (Max Gail) is getting ready to be married. Sonny Corinthos (Maurice Bernard), Carly Corinthos (Laura Wright) and Stella Henry (Vernee Watson) are helping him prepare. He looks at Sonny and thinks he is a reverend, asking for a bible passage for the wedding.

At Charlie’s Pub, Kim Nero (Tamara Braun) is having a cup of coffee while Julian Jerome (William DeVry looks on. She says his coffee-making skills will get them all the way to NYC when Lucy Coe (Lynn Herring) overhears and interrupts. Lucy says “so it’s true they are abandoning Port Charles and buying the DOD house.” Lucy makes mention of selling Charlie’s which Kristina Davis (Lexi Ainsworth) overhears.

At General Hospital (GH), Alexis Davis (Nancy Lee Grahn) is meeting with Kevin Collins (Jon Lindstrom). Alexis says she is glad he is working again and that she needs to talk to him about something important.

GH Spoilers – Cameron Webber is shaken up by the kidnapping

In the park, Cameron Webber (William Lipton) is picking up trash when Trian Robinson (Sidney Mikayla) and Josslyn Jax (Eden McCoy) approach and wonder why he skipped out on the movies with them. He says he was kidnapped, to their surprise.

Cameron explains to the girls about his kidnapping by Shiloh and Dr Cabbott. He explains about the memory implants and that they tried to use a machine on him.

At General Hospital (GH), Laura Spencer (Genie Francis ) rushes off the elevator and sees Drew Cain (Billy Miller), she inquires about Franco Baldwin (Roger Howarth). Drew says he is still unconscious and Laura praises him for how he saved Cameron. Drew worries that this all his fault and Laura says it’s not his problem that Shiloh and Dr Cabbott did this.

In Franco’s hospital room, Elizabeth Webber (Rebecca Herbst) is keeping vigil when Epiphany Johnson (Sonya Eddy) enters and asks how she is doing. Liz says that Franco is the only one that matters and she needs Epiphany to help her wake him up.

Laura comes in to comfort Liz who is completely distraught.

As they prepare for the wedding, Mike does not recognize Sonny or Carly which upsets them. Stella calms Sonny down, but he is still upset and says all he’s been doing is letting go. Marcus shows up and says that this wedding is goodbye to his wife Yvonne.

Lucy wonders if everything inside the pub is for sale and Kim asks to speak to her privately. Julian jokes that Kristina is going to miss him and she says that she is grateful. Kristina asks Julian if he has told her mother yet that he is moving?

Alexis tells Kevin she stopped seeing Dr Byrne (Joe Flannigan) because she is attracted to him. Alexis says she found out personal things about him and lines were blurred. Kevin says that honestly, he’s not sure he can treat her either, but will her find a new therapist – which upsets her.

Alexis leaves and runs into Neil who is waiting outside himself to see Kevin. They chat briefly and she realizes that Kevin is Neil’s therapist as well. Neil goes in to talk to Kevin and they discuss Alexis.

At the retirement home, Carly comforts Sonny who is upset by Mike’s status. Mike talks to Sonny about his “son” and if he’s forgiven him for being a bad father. Sonny says he’s sure his son has forgiven him.

Alexis shows up at Charlie’s Pub and Julian tells her about the big move to NYC.

Stella gets a message that her long lost relative would actually like to meet her.

In his GH hospital room, suddenly Franco’s machines go haywire and he opens his eyes. Kevin enters and asks him what he remembers. Elizabeth enters and asks if he needs anything? He says he needs to speak to his superior officer………..flash to preview