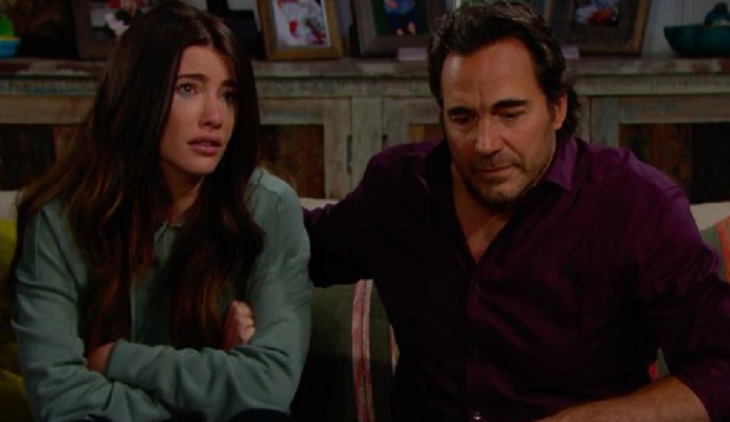 The Bold and the Beautiful spoilers tease that the contrast between Lope’s joy and Steffy Forrester’s (Jacqueline MacInnes Wood) pain couldn’t be more stark. Suddenly realizing that they, Hope Forrester (Annika Noelle) and Liam Spencer (Scott Clifton), were the victims of a heinous crime also means that Beth Spencer (Madeline Valdez and River Davidson) is alive. Meanwhile, one of the other people, Steffy, who was deeply impacted by what Reese Buckingham (Wayne Brady), Flo Fulton Logan (Katrina Bowden), and the enablers did is crushed by the reveal.

Steffy wanted Kelly Spencer (Zoe Pennington and Allison Marcia Sweeney) to have a sister. That wasn’t going to be possible through her dad, as Liam did what he was told by Steffy and returned to Hope last summer.

Awhile later, Taylor Hayes (Hunter Tylo) was forming a friendship with a fellow professional colleague, Reese. He pushed matters toward the seeming start of a romance, as part of his plan to get a quarter million dollars out of her.

The steal and sale of the fully healthy baby that Hope delivered on Catalina Island was possible because she and Liam were told that Beth was stillborn. Reese felt compelled to lie because he needed to pay off Mr. Thicke (Joey Travolta), a bookie from Las Vegas, Nevada. And that’s how this part of B&B’s shocking storyline began to play out.

Digitally skipping to now, Steffy is just beginning to comprehend that her mother didn’t pay that money in order to help Flo handle her claimed financial problems in exchange for the girl she’d given birth to in Vegas. Instead, Flo also lied, as she was never pregnant.

In his own twisted way, Reese wanted to ensure that Beth would be in a safe environment. Knowing that her father would be present, but allowing Liam and Hope to grieve forever was simply seen as a regrettable outcome.

Having Steffy raise Phoebe-Beth during this first part of her life allowed her to know her sister, Kelly, and be in regular touch with her real birth mother, Hope. But none of these details, or the ones mentioned in the above paragraph, ever made what Reese and Flo did okay.

Bold and the Beautifu Spoilers – Lope Celebrates, But Now Steffy Has Lost A Child

In addition to dealing with the loss of her perceived adopted child, Steffy will also need to come to grips with what Thomas Forrester (Matthew Atkinson), her own brother, did to her. Rather than immediately relay to Steffy, Hope, and Liam, what Flo admitted months ago, he hid the information, used it to intimidate others who knew the truth, while also manipulating his son, Douglas Forrester (Henry Joseph Samiri). Plus, Emma Barber (Nia Sioux) is gone because of Thomas’ actions.

Yes, Steffy will rebound. She’s resilient. In time, the first mother who Beth knew will also recognize the important role she played in keeping this girl safe. But for now the loss of the daughter Steffy honored with her fraternal twin’s name, Phoebe, is crushing.

Days of Our Lives Spoilers: Kristen Knocks Out Stefan and Gabi – Will ‘Stabi’ Survive Her Rage?

The Bold And The Beautiful Spoilers: Desperate Quinn Wants Paris To Stay Quiet – Will…