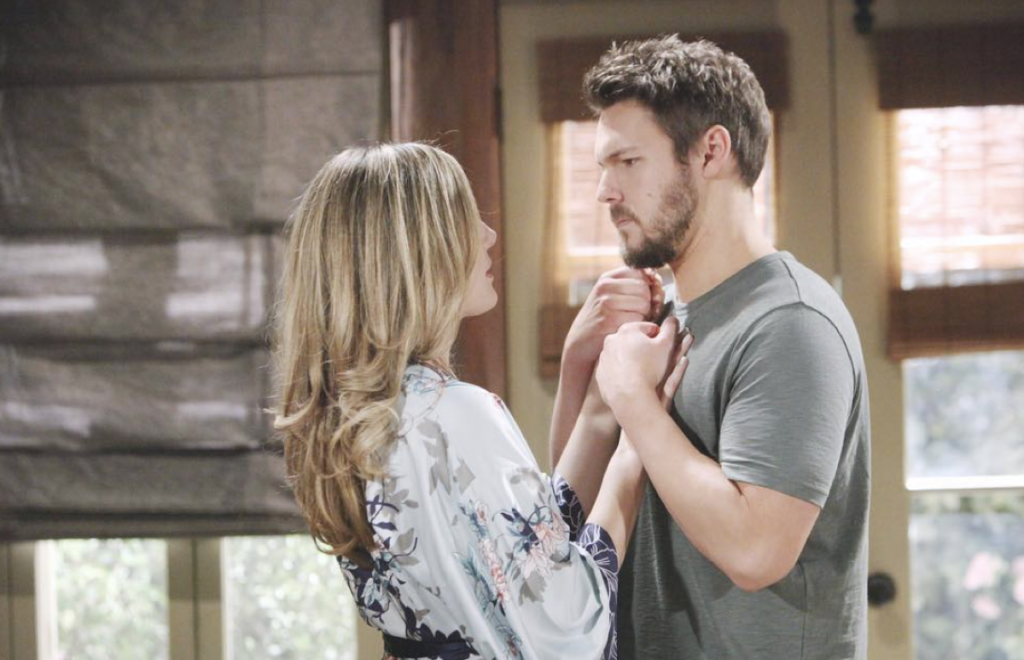 The Bold and the Beautiful spoilers for Tuesday, August 13, tease that Hope Logan (Annika Noelle) will be thrilled as she and Liam Spencer (Scott Clifton) bring home their daughter, Beth Spencer (River Davidson and Madeline Valdez). It will be a miracle for Hope that she’s finally going to have her daughter and Liam with her at the cabin.

Of course, B&B viewers will remember that Hope had given up her dream of ever having another child or a family of her own, so for her to bring her little girl home for the first time will be a joy. Look for some touching scenes and great family moments between Hope, Liam, and Beth on Tuesday’s episode.

It looks like Hope will have a few things on her mind as she and Liam settle in for the evening at home. She’ll have been through an emotional roller coaster, since she started out her day on her “staycation” honeymoon with Thomas Forrester (Matthew Atkinson). That led to a major showdown between Thomas and Liam, which in turn led to the dramatic scene at Steffy Forrester’s (Jacqueline MacInnes Wood) house.

The time to talk through all the details will probably be another day, but according to B&B spoilers, there will be one thing that Hope wants to make sure that Liam knows. She’ll confess to Liam that she still loves him, and that she never stopped loving him throughout all of the events of the past few months. She may even apologize for pushing him away and forcing the annulment.

Of course, there will still be some details for Hope and Liam to work through, including how her marriage to Thomas is going to be ended, and the fact that Liam slept with Steffy not too long ago. But it looks like Lope will take the first necessary steps toward getting back together, which is declaring their love for each other.

But Brooke will be feeing elated for Hope. Brooke has watched Hope fall apart over the past several months since Beth “died,” and she’s glad to see the old Hope that she used to know. Unfortunately, it looks like their opposing emotions will be tough on Brooke and Ridge’s relationship going forward. Ridge will try to be happy for Hope, but he’ll know that while Hope’s happy and fulfilled now, Steffy will be feeling an indescribable emptiness.

The Question Of Thomas’ Involvement May Divide “Bridge” Going Forward

And there’s another question that’s going to be running through Brooke’s and Ridge’s minds, and that concerns Thomas’ involvement in the Beth secret. Bridge want all of the guilty parties to pay the price for what they did, but they currently disagree on whether Thomas was involved in keeping the secret.

Of course, B&B viewers know that Thomas was indeed involved, and that he married Hope knowing full well that Beth was alive. Ridge is still unable to accept that his son might have done these things, even though Zoe Buckingham (Kiara Barnes) and Florence “Flo” Fulton (Katrina Bowden) laid out just about everything that Thomas did.

Look for tension between Brooke and Ridge whenever the topic of Thomas arises. Ridge won’t want to believe the truth, while Brooke fully believes Zoe and Flo’s story. It’s bound to cause some tension going forward, and things will get even more difficult when Ridge is forced to confront what Thomas ultimately did to Emma Barber (Nia Sioux).