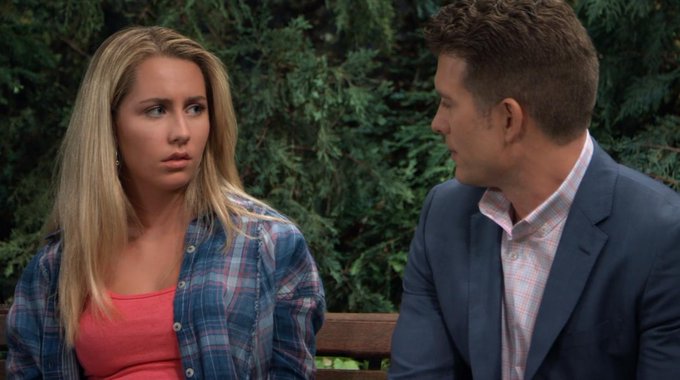 Also at the police station, Diane Miller (Carolyn Hennesy) , Sonny Corinthos (Maurice Bernard), and Dev Cerci (Ashton Arbab) arrive. Sonny tells Dev that when dealing with the cops, less is more. At the Quartermaine mansion, Olivia Falconeri (Lisa Locicero) is yelling on the phone at someone.

At the Corinthos estate, Josslyn Jax (Eden McCoy) has made her mother Carly Corinthos (Laura Wright) a healthy breakfast. Josslyn says it’s also a kind of apology for freaking out about the boarding school. Josslyn defends Dev and thinks he should stick around and not leave.

Carly tells Josslyn that things will get better like they did with Morgan. Josslyn says she feels lonely and doesn’t know how to express her grief.

GH Recap – Josslyn Jax is having a meltdown

At Charlie’s Pub, Cameron Webber (William Lipton) and Trina Robinson (Sydney Mikayla) are discussing that their friend Joss is “losing it.” They spot their new teacher Dustin Phillips (Mark Lawson) who tells them they should be in class by now.

Julian tells Trina and Cameron that Dev can have free food for now on for saving Wiley.

Olivia storms into Charlies Pub and yells at Julian that she owns the bar and he can’t take it back. Julian says the sale is off and Olivia yells she’s going to do something about it.

On their way to breakfast, Laura Spencer is poking for more information from her daughter Lulu Spencer (Emme Rylan) about Dustin. Dustin walks out of the coffeeshop and Lulu tells Laura that he is a teacher at the school.

Laura asks more questions about Dustin and Lulu explains who wonderful he has been. Lulu says shes been drawn to Dustin from the first time she met him, Olivia listens nearby. Lulu mentions that she slept with Dustin which infuriates Olivia.

At General Hospital (GH) , Elizabeth Webber (Rebecca Herbst) goes to check on her husband Franco Baldwin (Roger Howarth). She enters the room and Franco says today is the day, next stop Shadybrooke.
Franco says that he feels sorry for Elizabeth and that the man she knows will never be back. Franco lists all the things that could go wrong, including a permanent vegetative state.

Is Curtis and Jordan's marriage ready to collapse on #GeneralHospital?
Read more on this below ⬇️⬇️⬇️⬇️#GHhttps://t.co/x4BKvogxIO

In the PC police station, Jordan Ashford (Brianne Nicole Henry) is questioning Sam McCall (Kelly Monaco) and Jason Morgan (Steve Burton) about Shiloh Archer’s shooting on the boat. Jordan wonders why he didn’t just injure Shiloh which Diane interrupts that it was self-defense.

Sam tells her side of the story from when she saw Shiloh threaten Jason, which is why she shot him.

Sonny Corinthos (Maurice Bernard) questions Dev as to why he was going to run away. Sonny says that he wants him to stay and he needs to know he can trust him, they hug. Dev explains to Jordan and Diane what happened on the Haunted Star.

Dustin takes his classroom outside on a nice day to discuss Emerson. Josslyn gets upset and storms away as Dustin goes to talk to her and calm her down.

A new nurse at the hospital seems suspicious and we flash to her overhearing Sam saying she shot Shiloh.

Lulu tells Olivia that she is an unmarried woman and will not apologize for her actions.

Carly starts to go into early labor and Jason shows up to take her to the hospital. At the hospital, Carly is crying as Sonny shows up just in time…..flash to preview