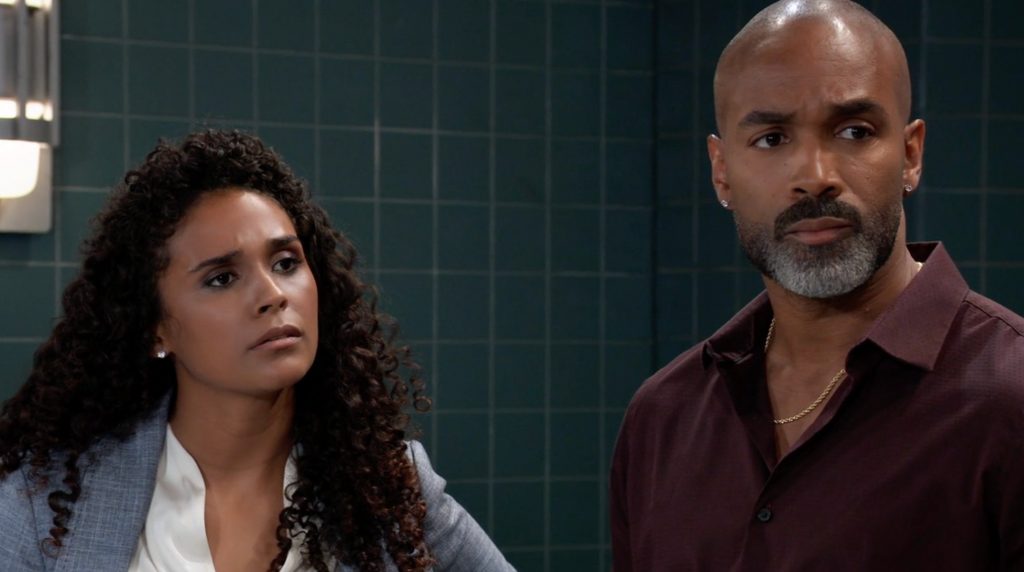 Taken out of context, those things Nurse Anderson heard could sound very incriminating; Jordan tells Sam the sooner we get this settled, the better off for all involved!

At Pentonville, Willow Tait (Katelyn MacMullen) is on the “red phone” as she updates her mother, Lorraine “Harmony” Miller (Inga Cadranel) on some current events. As General Hospital viewers know, Harmony had been Shiloh Archer’s (Coby Ryan McLaughlin) right hand woman, the leader of the Dawn of Day Beechers’ Corners group, and the first of Shiloh’s inner circle which he called “The Trust”. Willow doesn’t sugar coat it when she tells her “Shiloh’s dead”!

General Hospital Spoilers – Josslyn Jacks Saw Someone In The Park

Elsewhere, Josslyn Jacks (Eden McCoy) was obviously caught off guard seeing someone in the park; and she tells her older brother Michael Corinthos (Chad Duell) “You’ll never guess who I saw in the park”! Perhaps she saw Alexis Davis (Nancy Lee Grahn) with her new trainer, Kendra Lennon (Michelle Argyris); the park does seem like a good place to exercise outside! She may have seen Kristina Corinthos-Davis (Lexi Ainsworth) there too.

Maybe Kendra is a face from the past back to stir up some trouble? General Hospital viewers will recall someone looking up Alexis’ court trial for when she ran over Kiefer Bauer (Christian Alexander). Could Kendra be a relative of his looking for revenge after all these years?

Can Peter be redeemed on #GeneralHospital?
Read more on this #GH scoop below 👇👇👇👇👇https://t.co/dssJK5QJnA

Nelle Benson (Chloe Lanier) is happy to meet someone over at Pentonville; she tells the person it’s so good to meet him or her face to face! Shiloh’s dead and besides, Nelle and Shiloh already met; perhaps she has run into Willow, who is visiting her mother? It makes sense; Nelle and Lorraine are cellmates and Lorraine probably talks to Nelle a lot about her daughter!

In the maternity ward at General Hospital, Carly Corinthos (Laura Wright) is prepped on the operating table for her caesarian section, which is two weeks early thanks to Baby Corinthos being in a hurry and Carly having gone into premature labor in Friday’s episode! She says to Sonny Corinthos (Maurice Benard) who is holding her hand, “Let’s do this!

Let’s meet our little baby!” Sonny got there just in the nick of time to get her to the hospital, which marks the first time that he was supporting her in giving birth after Jason Morgan (Steve Burton) having had the job with all her other children (as she noted to Jason just before Sonny arrived on Friday)!Stay tuned to General Hospital and keep checking General Hospital spoilers frequently for all the latest news, updates and developments!