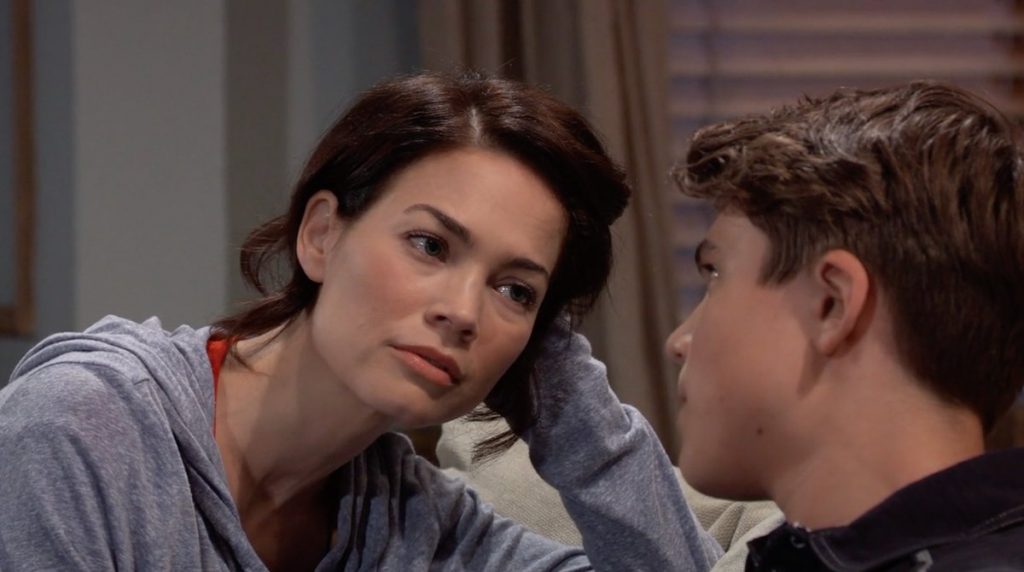 Welcome to your Friday, August 16th General Hospital (GH) recap! We begin our day at the Corinthos mansion where Carly Corinthos (Laura Wright) sees her husband Sonny Corinthos (Maurice Bernard) staring out on to the porch. He says he’s been thinking about their vow renewal, then the doorbell rings. Its Sam Mccall (Kelly Monaco) who says she has good news and bad news.

At Charlie’s Pub, Josslyn Jax (Eden Mccoy) and Dev (Ashton Arbab) sit down to eat while she lectures him about the importance of college.

At General Hospital (GH), Hayden Barnes (Rebecca Budig) approaches Hamilton Finn (Michael Easton) who says they need to talk about her sister. Hayden tries to understand the memory transfer and realizes that Franco has no memory of his life with Elizabeth.

Finn asks Hayden if she’s been to the Crimson offices lately, because she may have been exposed to a serious contagion. Hayden gets very concerned and Finn tries to assure her she’s probably okay.

At Elizabeth Webber’s (Rebecca Herbst) house, she comes home alone to a messy house. She sits down on the couch quietly and Cameron Webber (William Lipton) comes downstairs and asks if Franco’s okay. Cameron wonders if Franco will ever get better and realizes it’s not going to be easy to fix.

Cameron thinks his little brothers should know, but Elizabeth is hesitant to tell them. Cameron says he has to repay Franco and remind him of his life with them as a family.

GH Recap – Franco Baldwin is spiraling out of control

At the Floating Rib, Franco Baldwin (Roger Howarth) sees Jason Morgan (Steve Burton) at the bar, he recognizes him as his twin. Franco realizes he looks different than his twin but remembers when he discovered Jason existed. Franco brings up their mother Susan who dumped him and gave Jason to his father Alan Quartermaine.

Jason tells him that they never knew about him as he was taken by a woman named Betsy Frank. Jason tells him he is Franco Baldwin and Franco says he hope he never lays eyes on the Elizabeth woman again.

At the Corinthos mansion, Sam McCall (Kelly Monaco) updates Sonny and Carly on the memory transfer. She tells them that Franco now believes he is Andrew Cain. Carly asks how Sam is doing after the ordeal with Shiloh. She says she was terrified of being in the freezer and it reminded her about life’s blessings.

At General Hospital (GH) , Monica learns about memory mapping transfer that happened with Franco. She wonders how Drew feels about Franco having his pre 2012 memories. He says it’s upsetting, but he would have lost his recent memories he now has of his children.

Monica wonders if there is a silver lining to all of this, maybe Drew will benefit from it.

Also at the Floating Rib, Willow Tait (Catelyn McMullen) realizes that Harrison Chase (Josh Swickard) is distracted. She says “you are never really off duty, are you?” Willow tells him that loving someone who puts their life on the line can be a terrifying experience.

Willow says becoming a teacher was a great choice and Chase says a teacher inspired him to be a cop.

Finn says Hayden should spend more time with Elizabeth and the kids. Finn tells Hayden that it broke his heart when she left him.

Sonny and Carly tell Sam that they have decided to renew their vows which makes her very happy. Monica tells Drew that Franco could fill him in on his missing memories from before 2012.

Elizabeth flashes back to her wedding while holding her ring and begins crying. There is a knock at the door and its Hayden.

Franco asks Jason if he is still rich and if he could borrow a few hundred bucks. Jason say no and Franco tells him to stay the hell away from him. They almost come to blows but Chase runs up and gets hit instead. Chase arrests Franco for assaulting an officer……….flash to preview