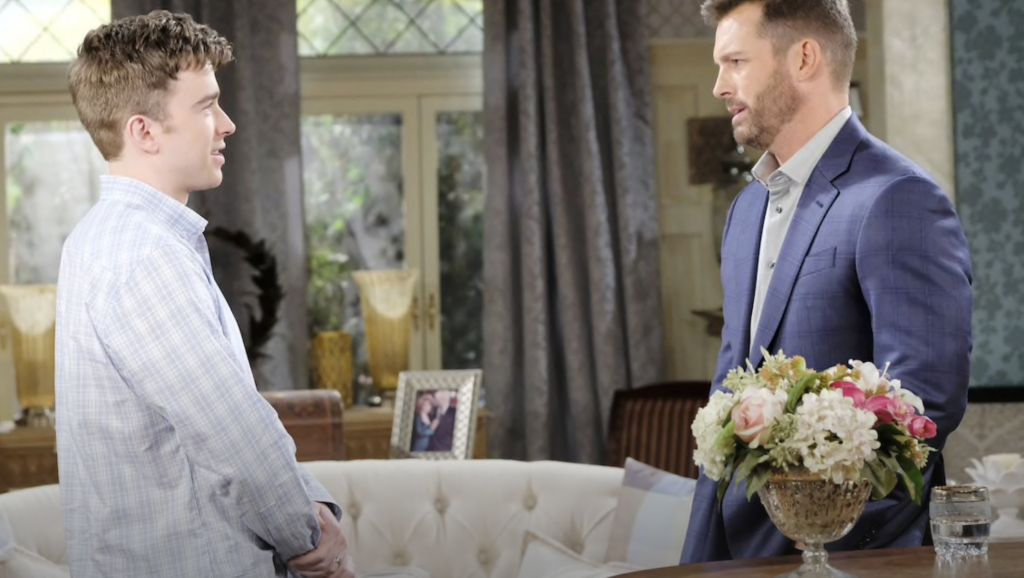 Days of Our Lives spoilers for Monday, August 19th finds Will Horton (Chandler Massey) suggesting to Brady Black (Eric Martsolf) that Kristen DiMera (Stacy Haiduk) could be well and alive. Also, Gabi Hernandez (Stacy Haiduk) and Stefan DiMera (Brandon Barash) admit to one another their true feelings. Here’s what you need to know.

DOOL Spoilers – Will Horton And Sonny Kiriakis Are On The Hunt

It begins with Will and his husband Sonny Kiriakis (Freddie Smith) taking matters into their own hands. They first go to Xander Cook (Paul Telfer), who they know has inside dirt about Kristen. They dig up a few things and are surprised by what they find. Just because Xander has been on his best behavior lately that doesn’t mean he isn’t covering a few dirty secrets of his own. Either way, Will and Sonny already know that in order to crack the case, they need to crack Xander first to find out what he knows.

Days of Our Lives Spoilers – Brady Black To Team Up With Kristen DiMera?

Will also suggests to Brady that Kristen might be alive. Little does Brady know that when he slept with Nicole Walker (Arianne Zucker), he had actually made love to Kristen. However, Days of Our Lives spoilers tease that there’s a very strong possibility that Brady might end up working with Kristen after he finds out who she really is. Plus, it won’t be long until Kristen confesses her true identity after realizing that she can’t run around Salem in a mask for the rest of her life.

Elsewhere, after Stefan saved Gabi from her awful catfight with Nicole, she asks him why he did it. Stefan says that he’s in love with her and because she is his wife, he is willing to do anything for her. This in turn leaves Gabi more confused than ever before about whether or not she loves him or she still hates him. However, both Stefan and Gabi confess there true feelings for one another with Gabi being as honest and truthful as she can be. It looks like Stabi has a chance after all.

Days Of Our Lives Spoilers: Brady Confesses To Eric He’s Back Together With Nicole https://t.co/ntU2VRimhX

Kate Roberts Has A New Job

Also, Kate Roberts (Lauren Koslow) get a job offer from the DiMera board. Kate knows that it’s very important to keep your friends close and your enemies closer but this is something that she didn’t expect. Plus, she has no idea that both Ben Weston (Robert Scott Wilson) and his girlfriend Ciara Brady (Victoria Konefal) are on her tail. And while everyone is busy trying to dig up dirt on Xander, he’s too busy trying to put the moves on Sarah Horton (Linsey Godfrey).This, in turn, feels uncomfortable with it. Plus, there’s also the fact that she already has a new man in her life: Eric Brady (Greg Vaughan).