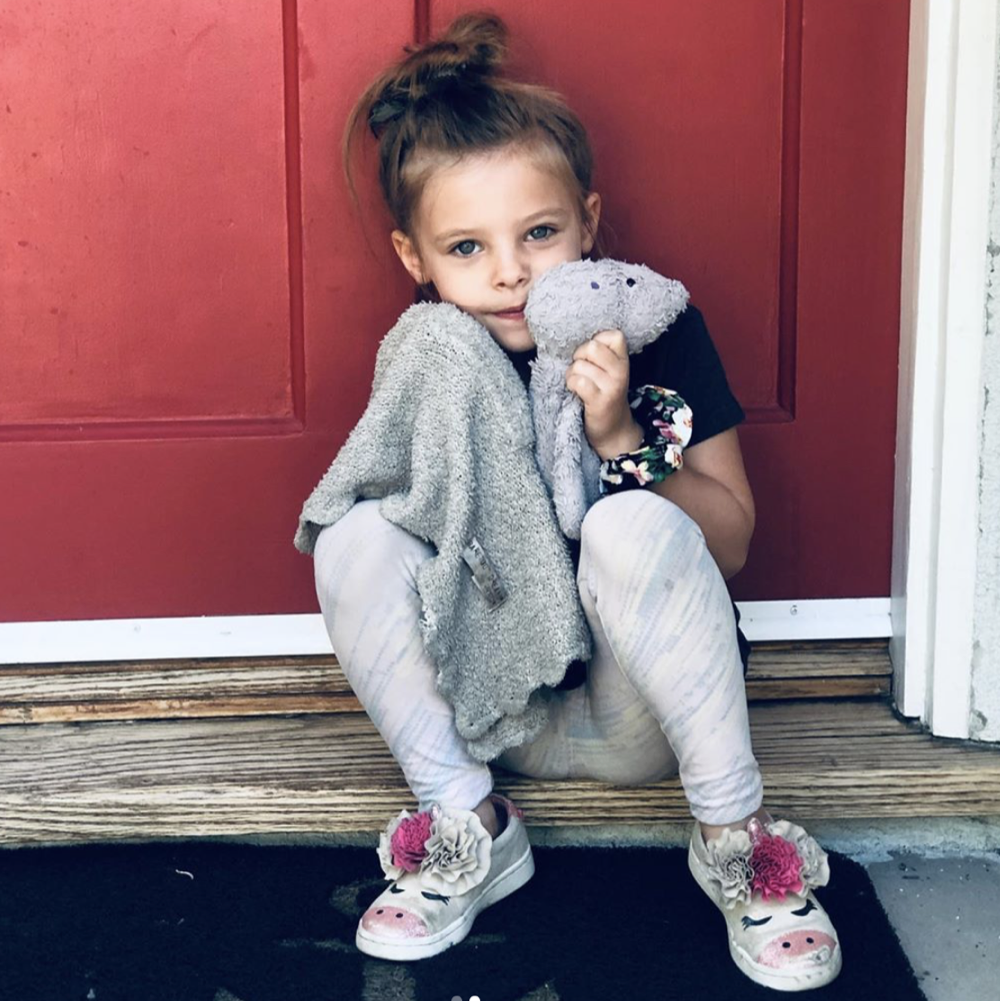 General Hospital spoilers tease that Harper Rose Barash is a happy, if nervous little camper at her first day at “camp” at her new school. Mama Kirsten Storms (Maxie Jones) reports “First day of camp at her new school is giving Harps all kinds of feels. She asked me how I felt right before I went to a new school for the first time – we talked about feeling nervous, new teachers, and making new…” obviously Kirsten was talking about new friends although she didn’t quite finish her sentence.

From Daddy Brandon Barash,(now Stefan DiMera, Days of Our Lives, formerly Johnny Zacchara, General Hospital) we find out that Harper graduated from her preschool June 26th and officially became an incoming kindergartener June 27th so Kirsten must be talking about her first day at kindergarten.

Little Harper Rose, who was named after author Harper Lee because of Brandon’s love of the book “To Kill A Mockingbird” already has acting experience in her resume, having played little Georgie Spinelli for a time on General Hospital in 2015 spends about an equal amount of time between her daddy and mommy, who are divorced, and often goes for playdates with Dakota Rose Money, daughter of Emme Rylan (Lulu Falconeri) when she’s with mommy, who is besties in real life with Emme just like Maxie is with Lulu on General Hospital!

First day of camp at her new school is giving Harps all kinds of feels. She asked me how I felt right before I went to a new school for the first time – we talked about feeling nervous, new teachers and making new friends. I could see her excitement was overpowering anything else. For real tho, I have all the feels too. 🌹♥️

Many castmates of both Kirsten and Brandon have remarked what a little cutie Harper is, including James Patrick Stuart (Valentin Cassadine, General Hospital) and Alison Sweeney (Sami Brady DiMera, Days of Our Lives) on Kirsten and Brandon’s social media accounts and there is a huge smattering of cute pictures on both their Twitter accounts, and Kirsten’s Instagram and Facebook accounts as well.

Although there hasn’t been any buzz lately about Harper reprising her role as Georgie on General Hospital (back then she was a baby and didn’t have to learn lines) General Hospital viewers and possibly some Days of Our Lives viewers as well might want to take a peek at GH if she does at some point in the future.

Stay tuned to General Hospital and keep an eye on Kirsten and Brandon’s social media for news and pictures of Harper, and keep checking General Hospital spoilers frequently for all the latest news, updates and developments!