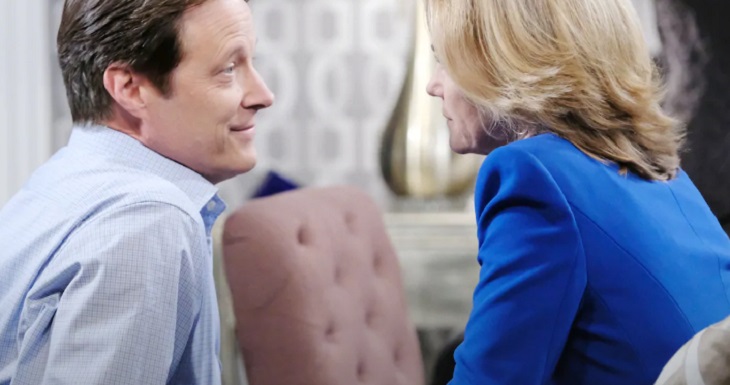 Days of Our Lives spoilers tease that Eve Deveraux (Kassie DePaiva) will become very confrontational with her husband Jack Deveraux (Matthew Ashford) when she finds out he’s been hiding something from her in this Tuesday, July 2nd’s Days of Our Lives!

Jack’s not only hiding one thing, he’s hiding two, and possibly more is going on behind Eve’s back than she even suspects, but this confrontation will likely be about his getting JJ Deveraux’s (Casey Moss) charges dropped behind her back! She may suspect that he has Dr. Wilhelm Rolf’s (William Utay) diary as well, if she has been hunting for it to get it back in her hot little hands!

Jack, as Days of Our Lives viewers know, has been secretly resisting more and more of Eve’s control and manipulation of him and wanting to be his own man and make his own decisions, whether he has his memories or not. His personality and psyche are overriding his lack of memories of who he previously was and how he would do things from his subconscious and he is starting to feel controlled by Eve…and he doesn’t like it!

Eve, on the other hand, sees Jack as a blank slate in every way; one that she can mold into what she wants and into doing her bidding. She may say she loves Jack and tells him she does, but what she’s really doing is using him – and he’s starting to feel it!

Jack’s family, and in particular his son JJ is starting to mean much more to him than Eve does, although he hasn’t admitted feeling any emotional pull to his ex-wife and mother of his children, Jennifer Horton (Melissa Reeves) just yet.

Things do appear to be gradually heading that direction, although it may be a while; but the fact that Jack seems to be feeling a bond with his children and grandchildren is a good sign that he will feel one with Jennifer too, and he will more clearly see that staying married to Eve, regardless of whether he continues as Mayor of Salem or not, is not in his own best interests and Days of Our Lives viewers may see more of the old Jack come to the surface and it will be reflected in his Mayoral job as well as his personal life and relationships!