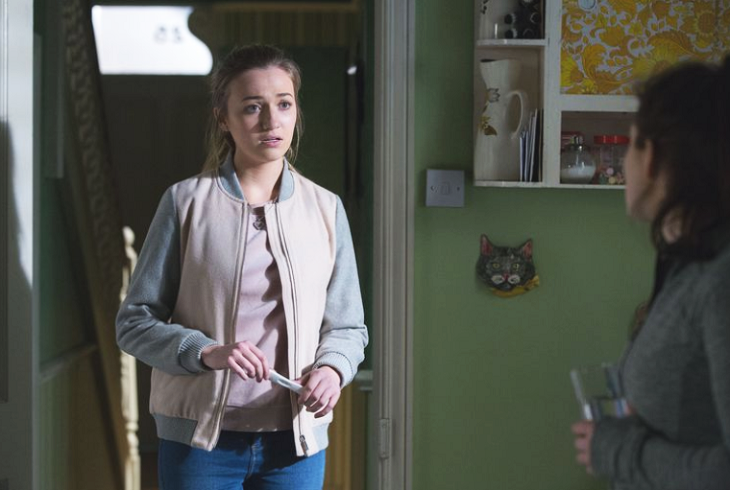 On “EastEnders,” Louise Mitchell (Tilly Keeper) will make a difficult decision after finding out that Keanu Taylor (Danny Walters) was getting paid to date her. She will not only dump him but also secretly plan an abortion.

In the previous episode, Louise took the advice of her best friend Bex Fowler (Jasmine Armfield) and searched for Keanu so they could talk more about her situation. However, she ended up overhearing Keanu talking to her father Phil Mitchell (Steve McFadden).

EastEnders Spoilers – Keanu Taylor Was Paid To Date Her

Phil didn’t like Keanu’s response and immediately reminded him that he’s only spending time with his daughter because he was paid to do so. Viewers of “EastEnders” already know this but Louise doesn’t. All this left the pregnant teenager feeling betrayed, devastated, and heartbroken.

Louise was in no mood to forgive Keanu for his actions even though his feelings for her were genuine. Although she was carrying their child, she still decided to dump him. She didn’t tell him she knew about his arrangement with her dad. Instead, she lied that she wasn’t pregnant after all and wanted to end their relationship, “EastEnders” spoilers reveal.

Keanu felt something was off and demanded a further explanation. He went to the Mitchell’s house to get the answers that he wanted. However, he wasn’t able to talk to Louise but was instead confronted by Sharon Mitchell (Letitia Dean).

She sent Keanu home and then headed back inside to support her step-daughter, who was already booking an abortion.

Will Keanu ever find out that Louise plans to terminate her pregnancy? Will Louise and Keanu ever get back together? Will Louise go through with the abortion? Will Louise confront Phil about paying Keanu to be with her?

Spoilers for the upcoming episodes of “EastEnders” reveal that Keanu will be on a downward spiral after the breakup while Louise will turn to her best friend Bex. While he is drowning his sorrows in The Vic, Linda will call on Sharon for help. She tries to offer support but will he listen?