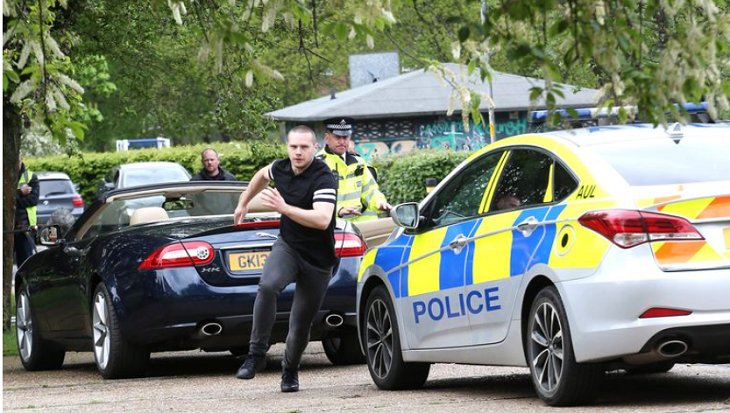 In “EastEnders’” new paparazzi pictures, Keanu Taylor (Danny Walters) will find himself involved in a dramatic police chase after stealing a car. It seems like Walters’ character is making another risky move and may even shift to the dark side along the way.

Keanu steals a car and will be pulled over in the middle of the road by the police. An officer gets out of the police car and approaches Keanu. The officer asks if he’s the owner of the car, and as he checks the registration plate, Keanu makes a run for it.

Whose car is it? Why did Keanu steal a car? What has Keanu gotten himself into that may have forced him to return to his old life of crime again?

For now, fans of “EastEnders” can’t do anything else but speculate as to Keanu’s reason for all these. They may even have to wait until summer for these scenes to be aired.

On “EastEnders” next week, Keanu makes a risky move and double crosses Ben Mitchell (Max Bowden). He pretends as Ben and takes some logbooks for the cars Ben ordered. He then acts as if he knows nothing when Ben asked if his order has arrived. It didn’t take too long for Ben to figure out that Keanu double crossed him.

For now, viewers can expect to see problems brewing ahead for Keanu and his pregnant girlfriend, Louise Mitchell (Tilly Keeper). Their relationship will be on the rocks as one of them makes a shocking discovery that could force Keanu to return to being a bad boy.

Viewers may recall that Louise and Keanu has gotten closer together following the kidnapping ordeal. Louise discovers that she is pregnant with Keanu’s child and immediately confides to her best friend Bex Fowler (Jasmine Armfield).

When Louise finally had the chance to tell Keanu that she’s carrying his child, he rushes off to talk to his mother Karen Taylor (Lorraine Stanley) for some advice.

After receiving a tough reality check, Keanu tries to get hold of her pregnant girlfriend, who tries to dodge his calls as she was still with her mother Sharon Mitchell (Letitia Dean). Later, Louise heads off to find Keanu but ends up making a shocking discovery.