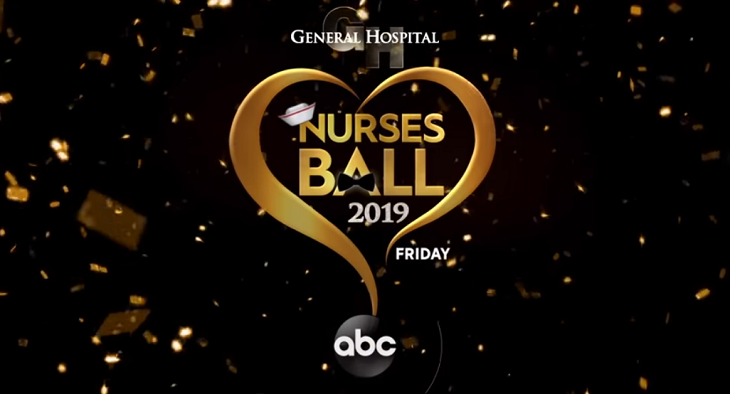 General Hospital viewers already know, from hints given within the program, that among the performers this year will be Ava Jerome (Maura West) and Valentin Cassadine (James Patrick Stuart). Stuart will be performing some original music, possibly from his new CD “The Apple Tree”.

The promo gives some clues as to the other performances. As usual, it looks like the nurses of General Hospital will be dancing, and gowns for Josslyn Jacks (Eden McCoy), Elizabeth Baldwin (Rebecca Herbst) and Lulu Falconeri (Emme Rylan) are shown hung on a rack.

Lights, cameras, sound boards, mike checks and musicians tuning up are shown in the promo, as well as Lucy Coe (Lynn Herring), who will be hosting and announcing the event again.

She may get into some backstage mishaps along with Scott Baldwin (Kin Shriner). Spoilers say they will be up to their old tricks. In Lucy’s case this usually involves a wardrobe malfunction or some other embarrassing situation!

The red carpet event, where everyone enters the ball and is announced, is hosted by Nina Reeves (Michelle Stafford) and Sydney Val Jean (Chandra Wilson), a  New York City Crimson fashion editor.

KABC Los Angeles Emmy-award winning entertainment reporter George Pennacchio also returns to the red carpet for the sixth time. With Milo Giambetti’s (Drew Cheetwood) return to the Port Charles canvas it’s possible viewers may see an appearance of Magic Milo and his Magic Wands. This is always a popular event, but this has not yet been confirmed.

This is the 25th anniversary of the Nurses’ Ball. It was founded by Robin Scorpio-Drake (Kimberly McCullough) originally as a benefit for AIDS and HIV research.

The Nurses’ Ball will run from Friday, May 17 through Wednesday, May 22. Stay tuned to General Hospital and keep checking General Hospital spoilers frequently for all the latest news, updates, and developments!

General Hospital Spoilers: Michael Frustrated With Willow, Tries To Clear His Head By…