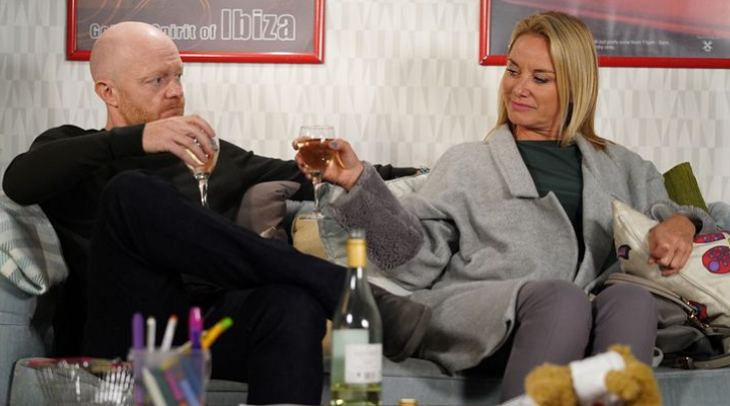 Viewers have seen several changes on the romantic side of “EastEnders.” According to new spoiler photos, fans could see a budding romantic relationship between Max Branning (Jake Wood) and Mel Owen (Tamzin Outhwaite) as they share a cozy drink together.

It all starts with Mel catching her daughter Amy Mitchell (Abbie Burke) shoplifting. She checks up on her and discovers that she stole sanitary products.

Jack Branning (Scott Maslen) feels happy to see Mel and Amy bond. He then takes Mel by surprise when he says he is going on a date with Denise Fox (Diane Parish) later that evening. Max then shows up and winds her up. How will Mel respond to his probing?

Max Branning hasn’t been around since February. With his recent return comes a new storyline that will excite viewers of the soap. Max comes back to Walford eager to make peace with Raine Branning (Tanya Franks), his wife, who’s been left wondering where he’s been and what he’s been up to.

Before his return, Jack told Rainie that Max had an affair while he was away, which means his presence will surely be a shock for Rainie, along with his desire to make amends.

As expected, Rainie is furious to see Max, but he won’t back down and is determined to fight for their relationship. How can he be with Mel if he’s hell-bent on getting back with Rainie?

Meanwhile, Jack is feeling unlucky when it comes to his love life after his failed relationship with Mel last year. Fans of “EastEnders” may recall that Mel left Jack when her ex-husband Ray Kelly returned to Walford.

He’s been having a hard time getting over Mel but it seems like he is ready to move on. There’s no stopping him from finding his true love as he tries once again with Denise, who some help from Mick Carter (Danny Dyer) who tries to play matchmaker.

When Jack tells Mel that he’s set up a date with Denise, she’ll eventually realize that she too needs to move on. Could this mean she will welcome Max’s advances? Will they become the newest couple in Walford? Or will it be Jack and Denise?