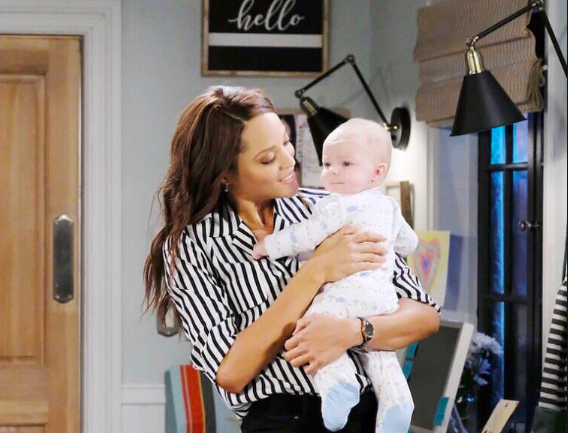 For her part, Lani knows from Rafe Hernandez (Galen Gering) that David’s mother, Jordan Ridgeway (Chrishell Hartley) doesn’t want Ben anywhere near him, so she is respecting Jordan’s wishes. However, the fact that Lani lies to keep Ben away from David shows there’s something wrong; all she would have to do is just tell the truth, that Jordan doesn’t want Ben near the baby!

Days of Our Lives viewers know that Ciara planned to talk to Rafe about Ben seeing David more often after Ben’s decision that he needed to be in his nephew’s life after having to deliver tragic news about little Holly Jonas (Scarlett and Harlow Mallory) to Chloe Lane (Nadia Bjorlin) and Stefan DiMera (Brandon Barash), and noting that he was hired to protect Chloe and the kids and feels like he failed to, what with the outcome of Holly being kidnapped and presumed dead in a car crash.

Days Of Our Lives Spoilers: Lani Price Is In Denial About Her Attachment To The Baby

Lani is very much in denial that she has formed unhealthy attachments to the baby and most likely is latching on to him subconsciously as a replacement for she and Eli Grant’s (Lamon Archey)baby, also named David, who sadly died during a necessary operation Lani had to have because of a medical crisis before birth.

Even though it was a matter of life or death for Lani, she obviously has never gotten over losing him before he even had a chance to be born. Both Eli and her father, Abe Carver (James Reynolds) have noticed Lani’s extreme and inappropriate bonding to Baby David, and are concerned with what will happen when Jordan is well enough to take custody of her little one again.

DOOL Spoilers: Ciara Brady and Ben Weston Learn They Were Lied Too

If Ciara and Ben find out that Lani lied this time when they try to visit, Days of Our Lives viewers can expect that Rafe, Eli and Abe might all hear about it and realize that Lani cannot be allowed to care for David. She may even try to keep Rafe away if she gets desperate enough!