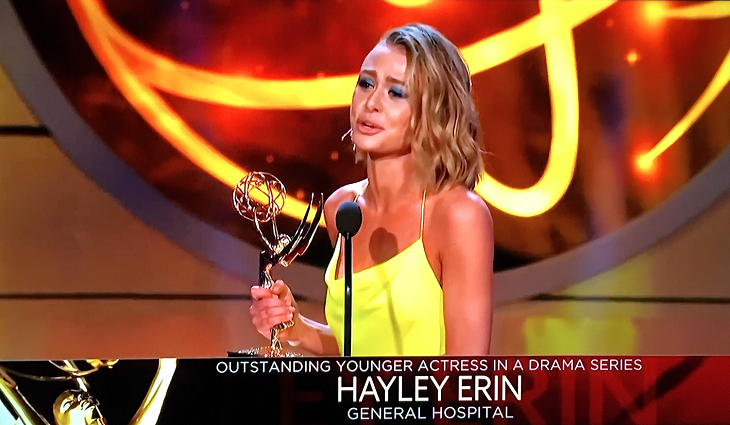 Haley Erin has won a Daytime Emmy For Best Younger Actress for her portrayal of Kiki Jerome on General Hospital.

She was also sexually harassed by Dr. Bensch (James DePaiva), who told her he would give her a bad evaluation unless she slept with him.

Erin  revealed in a recent interview that she has not yet watched the funeral for Kiki, although she watched all the episodes with Maura West.

“Leading up to this, I thought I was going to relish in it. ‘I’ve cried over graves. Now I want to watch you cry over my grave!’ But it’s so not like that. It’s genuinely sad for me,” she said.

Erin is currently on “The Perfectionists,” playing a character named Taylor Hotchkiss. Taylor is the eldest child of the Hotchkiss family.

“Any person of any age who watches GH will love THE PERFECTIONISTS,” Erin said. “It’s a teen murder-mystery soap opera with storylines involving college professors and students. It’s edgy, sexy and dark. But it’s still funny.”

Congratulations to Hayley Erin for her win as Outstanding Younger Actress!