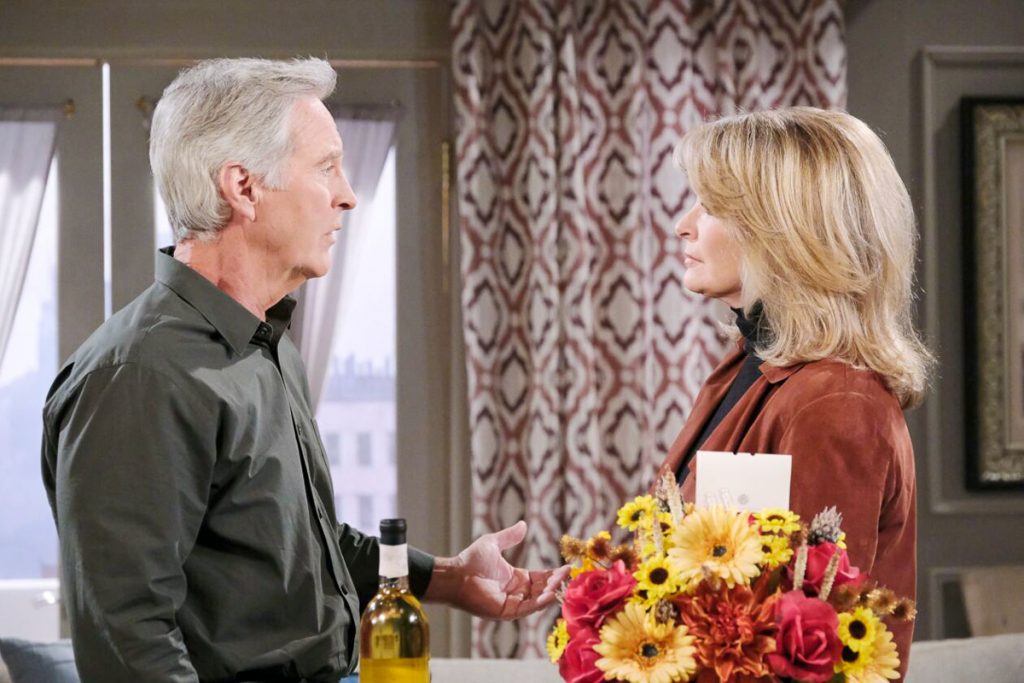 First, “Princess Gina Von Amberg”, who Days of Our Lives viewers know is really Hope Brady (Kristian Alfonso) with a device implanted in her neck that activated the old control chip in her brain originally put there by Stefano DiMera (last played by the late Joseph Mascolo) many years ago, finishes her new portrait of a presumably new Stefano!

Viewers should hopefully be able to see both the portrait and the person in Wednesday’s episode, which coincidentally – or not? – is also Steve Johnson’s (Stephen Nichols) first day back as he returns to Salem. Whoever Stefano turns out to be, it’s either his “essence” in another body or a device like is being used on Hope.

Speaking of doppelgangers, Eve Donovan (Kassie DePaiva) celebrates her first Thanksgiving in prison with Hattie Adams, (Deidre Hall) doppelganger. She became Dr. Marlena Evans’ (Deidre Hall) doppelganger by plastic surgery performed by Dr. Wilhelm Rolf (William Utay), of course instigated by Stefano. Hattie always provides comedy in that she is so radically different from the refined and gracious Marlena; in fact, Hattie might be a redneck!

She speaks with a southern accent although not quite as southern as Susan Banks (Stacy Haiduk) and one has to wonder if Hattie also grew up in Poplar Bluff, Missouri like Clyde Weston (James Read) because their accents are rather similar! God help Salem should Hattie and Clyde ever get together and become an item!

Meanwhile, Marlena receives a gift from a secret admirer; considering the conversation between Princess Gina, who wants Marlena’s husband, John Black (Drake Hogestyn) and “Steffy”, where Princess Gina referred to “Steffy’s” “Dark Queen of The Night”, could Stefano be the secret admirer and Marlena his dark queen? Longtime Days of Our Lives viewers will recall in the mid-1990s when Stefano gave Marlena mind-altering drugs while she was asleep, and then once he had her hypnotized, kidnapped her into a fantasy world of romance between the two of them.

As a result of the mentally, emotionally and spiritually abusive aspects of the kidnapping, she developed a totally different personality that overshadowed her own, and also became possessed by a demonic spirit! She even levitated off her bed, and John, who was a priest at the time, had to perform the exorcism!

In a much later storyline, she became the Salem Stalker, possibly also as a result of the aftereffects of the mind-altering drugs and the mental, spiritual, and emotional abuse of Stefano’s previous kidnapping of her. These dark aspects of Marlena’s life and the kidnapping by Stefano into his fantasy world of romance may be why he calls her a “dark queen”.