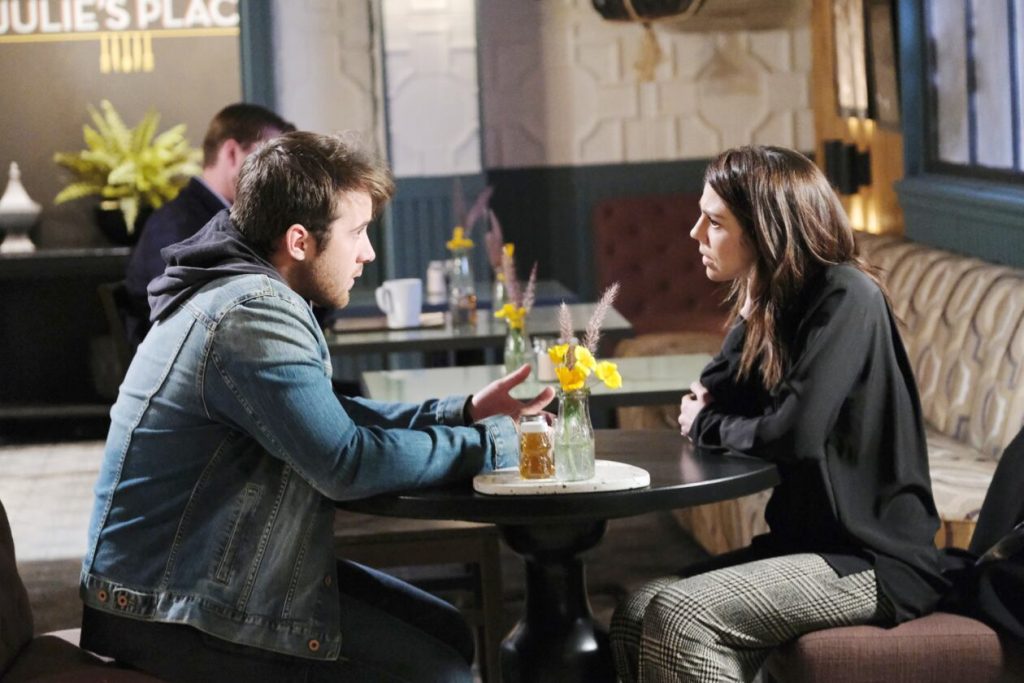 Abigail DiMera (Kate Mansi) and JJ Deveraux (Casey Moss) talk about Haley Chen’s (Thia Megia) death, which occurred during the one year period of time skipped on Days of Our Lives during the “time jump” while their mother, Jennifer Deveraux (Melissa Reeves) was in a coma.

Not many details have been given about exactly what happened, hopefully this scene will answer the questions. We know Haley fell down some stairs and Kristen DiMera (Stacy Haiduk) had something to do with it, although she was not charged with anything. JJ has deteriorated over the devastating death of his girlfriend and has become addicted to painkillers.

Eli Grant (Lamon Archey) warns Gabi DiMera (Camila Banus) who is now his girlfriend that Abigail and Chad DiMera (Billy Flynn) are onto him! As Days of Our Lives viewers know, Eli was caught as he started to look in Chad’s laptop in a recent episode. Gabi had been fearful that Chad has been plotting to have her removed from DiMera Enterprises, taking away her position of power in the company. There has been bad blood between Gabi, Chad and Abby for quite some time now, even though Abby forgave her for falsifying baby Charlotte DiMera’s (Chloe Teperman) paternity test what would now be two years ago.

Lani Price, (Sal Stowers) who has been in a convent for the past year along with Kristen, finally confides to someone why she left Eli. She will tell Kristen how Gabi had an app on her phone with which she could control Julie Williams’ (Susan Seaforth Hayes) heart rate through her pacemaker and had threatened to kill her by using the app, if Lani didn’t dump Eli at the altar.

Days of Our Lives viewers will recall that Lani had accidentally shot and killed Gabi’s husband, Stefan DiMera (Brandon Barash) when he jumped in the line of fire as Lani was trying to shoot his mother, Vivian Alamain (Robin Strasser) in self-defense. Gabi had wanted Lani to suffer like she had suffered! Kristin will be livid and tell Lani to go back to Salem and tell what happened, but Lani declines. For one thing, she can’t be sure that Gabi still doesn’t have that app on her phone and will use it!

Xander Kiriakis (Paul Telfer) finally tells Sarah Horton (Linsey Godfrey) he loves her. He has been in love with her for over two years now, so it’s about time! They have just been through a horrific time with Baby Mackenzie “Mickey” Horton (the May twins) having been kidnapped and Xander being forced to sign a confession that he and Victor Kiriakis (John Aniston) had been responsible for the murder of Ben Weston’s (Robert Scott Wilson) sister, Jordan Ridgeway (Chrishell Hartley) by Clyde Weston (James Read) who had one of his “associates” on the outside kidnap the baby. Days of Our Lives viewers will wonder how Sarah will respond!