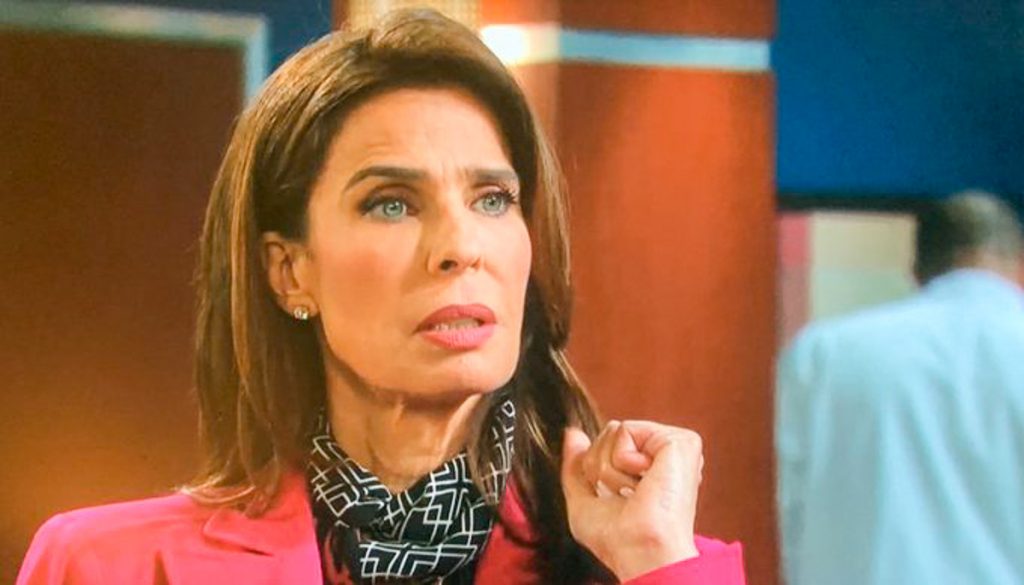 Days of Our Lives spoilers reveal that Princess Gina (Kristian Alfonso) is painting a new portrait of Stefano DiMera (formerly Joseph Mascolo). Could this tie in with the person claiming to be the DiMera patriarch? Who is impersonating him? Stefan DiMera’s (Brandon Barash) twin and Johnny DiMera (formerly Aaron Kunitz and Griffin Kunitz) are two possibilities.

On Thursday’s episode of the NBC soap opera, Princess Gina worked on painting a new portrait. While viewers didn’t see the artwork, we know it was of “Steffy” because she kept looking at the original portrait of Stefano on the wall.

She was also talking to the picture as if he were a living, breathing person. It is assumed that it is because Dr. Rolf (William Utay) wants her to keep out of sight. However, she is also cooped up in the mad scientist’s “castle” and is alone much of the time.

Days of Our Lives spoilers indicate that Stefano was not going to be recast after actor Joseph Mascolo’s death. It would be an insult to his memory and fans were very vocal about it. Those in charge of the show promised that they wouldn’t dare replace Mascolo with another actor.

So, if Chad DiMera (Billy Flynn) hasn’t been communicating with his father, then who is this mysterious imposter? It is speculated that someone is deliberately impersonating the DiMera patriarch. Another theory is that Dr. Rolf is going back to his brain chip days and implanting Stefano’s memories in someone else’s mind.

Shortly after Stefan DiMera (Brandon Barash) died, it was revealed that the actor was returning to the NBC soap opera. He can’t receive the resurrection injection because the character was brain-dead. This eliminates the possibility of Stefan being brought back from the dead.

However, Barash could return to play someone else. A few months ago, the actor was asked what he would like to see happen if he ever chose to return to the daytime series. Brandon thought it would be interesting if Stefan had a twin. Perhaps he was giving fans a clue.

Another possibility is that fake Stefano is actually Johnny DiMera, the son of EJ DiMera (formerly James Scott) and Sami Brady (Alison Sweeney). It is hinted that Johnny could be returning. Furthermore, it is implied that Johnny is just like Stefano.

Who do you think is pretending to be Stefano DiMera? Do you have any other theories on the mysterious return of the legendary character?

The Young and the Restless Spoilers: Kyle and Lola, Who Will Cheat First?