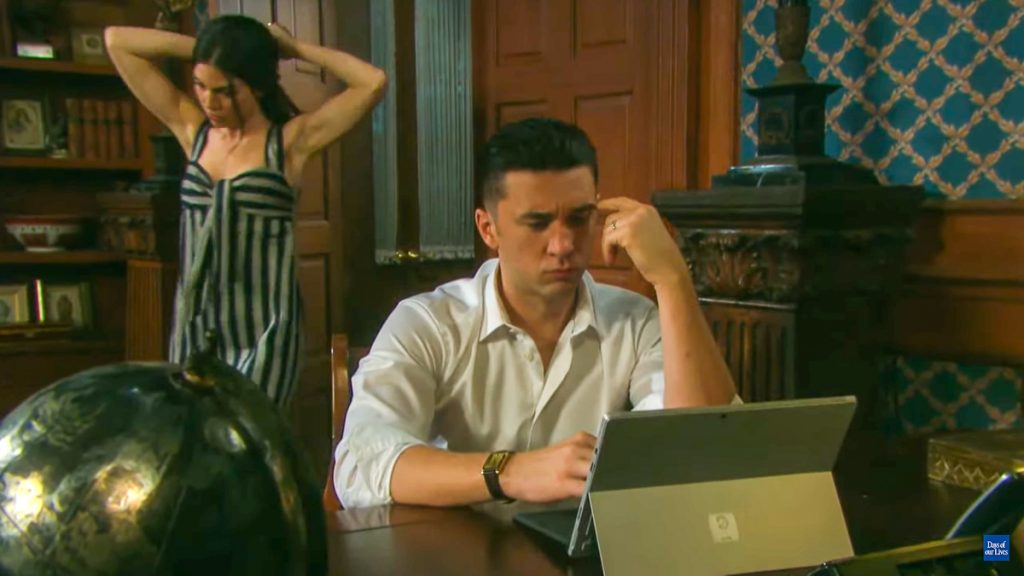 Days of Our Lives spoilers tease another exciting day of drama for Days of Our Lives viewers on Tuesday, November 19! Bear in mind, United States fans, that your show may be interrupted or pre-empted for the Trump impeachment hearings. Check the NBC app or nbc.com to watch the show after 8:00 PM EST if it is interrupted in your area.

Ciara Brady, (Victoria Konefal) who is now an executive for Titan Industries, snoops around Xander Kiriakis’ (Paul Telfer) office at Basic Black, where he is now an executive, and looks for any relevant evidence that might be able to help exonerate Ben Weston (Robert Scott Wilson) who is on death row for the murder of his sister, Jordan Ridgeway (Chrishell Hartley).

Ben knows he didn’t do it, he only found the body, and had even found his house broken into and noted it to Detective Rafe Hernandez (Galen Gering) before finding the body. He probably should not have touched anything, let alone the scarf around her neck with which she was strangled. She and Ben suspect that Xander may have killed Jordan in response to Victor Kiriakis’ (John Aniston) putting out a hit on her, since Ben had asked him to previously and then changed his mind. Victor didn’t want Ciara with Ben and Ciara was in danger from Jordan, so framing Ben for Jordan’s murder makes a lot of sense!

Eve Donovan, (Kassie DePaiva) now in prison for pushing Jennifer Deveraux (Melissa Reeves) over the balcony of The Bistro because of drunken remarks she had made earlier in the day, summons Abigail DiMera (Kate Mansi) to the prison. She is hoping to get her case re-examined because she knows that she did not push Jennifer, she had been drunk and sleeping it off in the Salem Inn, where Maggie Kiriakis (Suzanne Rogers) had taken her.

Eve thinks she was set up by someone, but she would probably do well not to accuse Abigail’s father, Jack Deveraux (Matthew Ashford) to Abigail! Jack, of course, suspected Eve immediately because of her drunken interruption of their wedding earlier in the day, plus Eve had drunkenly told Roman Brady (Josh Taylor) that she thought Jennifer needed to die; however, as Days of Our Lives viewers know, it was not Eve! Jennifer doesn’t even feel right about it being Eve!

Sarah Horton (Linsey Godfrey) and Xander bond over Mackenzie Horton, “Mickey” for short (the May twins). Days of Our Lives viewers can tell that the adorable baby has definitely won Xander’s heart! Cute little Mickey has won everyone’s heart at the Kiriakis mansion except possibly resident curmudgeon Victor. He can’t stand it when someone calls her “Mickey” and chooses to call her “Mackenzie”.

It seems like his distate for her nickname relates more to the fact of Mickey Horton (John Clarke) having been a previous husband of Maggie’s, even though he had passed away by the time Victor and Maggie got together! Days of Our Lives viewers will recall a recent episode where Maggie had awakened from a nap with the baby and told Victor that she had just spent an hour in bed with Mickey, and he spit his drink out! She had to explain it was the baby!

DOOL Spoilers – Chad DiMera Is Put To The Challenge

Chad DiMera (Billy Flynn) will be put to the challenge in Tuesday’s episode when he gets a message from Stefano DiMera (last played by Joseph Mascolo) in response to Abigail’s message about an in-person meeting, since Abby was very skeptical that it really is Chad’s father.

Chad insisted that it’s for real and the man he has been corresponding with really is Stefano, because he had asked him all kinds of challenge questions from the start, thinking the same thing, but he had answered every one of them correctly, even the questions pertaining to private conversations they had had. Stefano will meet him but there is a stipulation that Chad has to abide by.