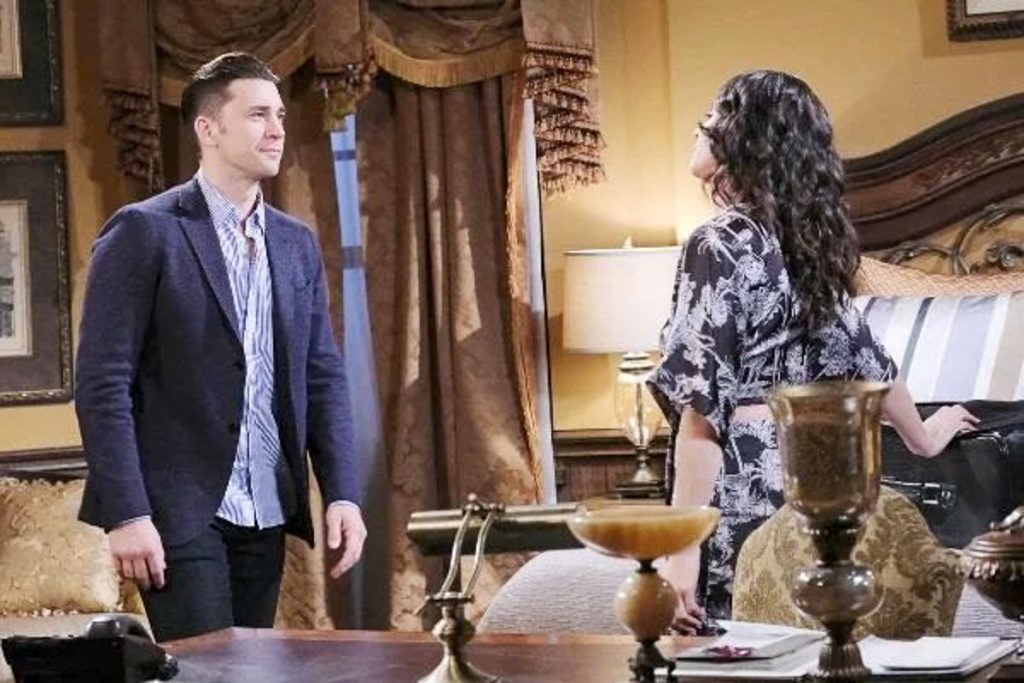 In the garden of the convent in Rome where Lani Price (Sal Stowers) and Kristen DiMera (Stacy Haiduk) have spent the last year learning to be nuns, Lani makes a huge appeal to JJ Deveraux (Casey Moss). He is holding a gun on Kristen and determined to “send her straight to hell” as he readies the gun to fatally shoot her at close range; Lani pleads with him as she makes a huge appeal to him to spare her life! Kristen remains kneeling on the ground in prayer. Kristen had been involved, albeit accidentally, in the death of JJ’s girlfriend, Haley Chen (Thia Megia) and he is out for revenge!

Back in Salem, the friction between Gabi Hernandez DiMera (Camila Banus) and Chad DiMera (Billy Flynn) increases as Gabi tries to throw him out of the house! It is doubtful that she will succeed, however, as photos from later in the week show Chad and Abigail DiMera (Kate Mansi) in the library of the DiMera mansion. Gabi feels that she has the ultimate power and rights to all that is DiMera since she is the widow of Stefan DiMera (Brandon Barash)!

Days of Our Lives Spoilers – Kate Roberts’ Secret Is Revealed

Meanwhile, Kate Roberts (Lauren Koslow) secret is revealed; she has a secret roommate, or at least a temporary one, so to speak – and it’s a man? Could she be hiding Dr. Wilhelm Rolf, (William Utay) or could Stefano DiMera (Stephen Nichols) be the one who Kate’s hiding out? She is helping someone out with a hiding place, Days of Our Lives viewers will have to tune in tomorrow to find out who!

One secret that Days of Our Lives viewers do know is that “Hope Brady” (Kristian Alfonso) has not been herself in over a year, having been implanted with an upgrade to the chip in her brain that Stefano had installed many years ago, that turned her into Princess Gina Von Amberg (Kristian Alfonso). It would seem that Princess Gina may be a little rusty regarding her “Hope” persona and is slipping into her own too often when she is portraying “Hope”. More than one Salemite is becoming suspicious of her odd behavior, and now Abigail questions her about the night that her mother, Jennifer Deveraux (Melissa Reeves) was pushed over the railing of the balcony at “The Bistro” onto the Horton Town Square below, where she had just remarried Abigail’s father, Jack Deveraux (Matthew Ashford). Jennifer just recently woke up from a coma that lasted for one year as a result! It sounds like she may have remembered more about “Hope” having been with her shortly before the push!