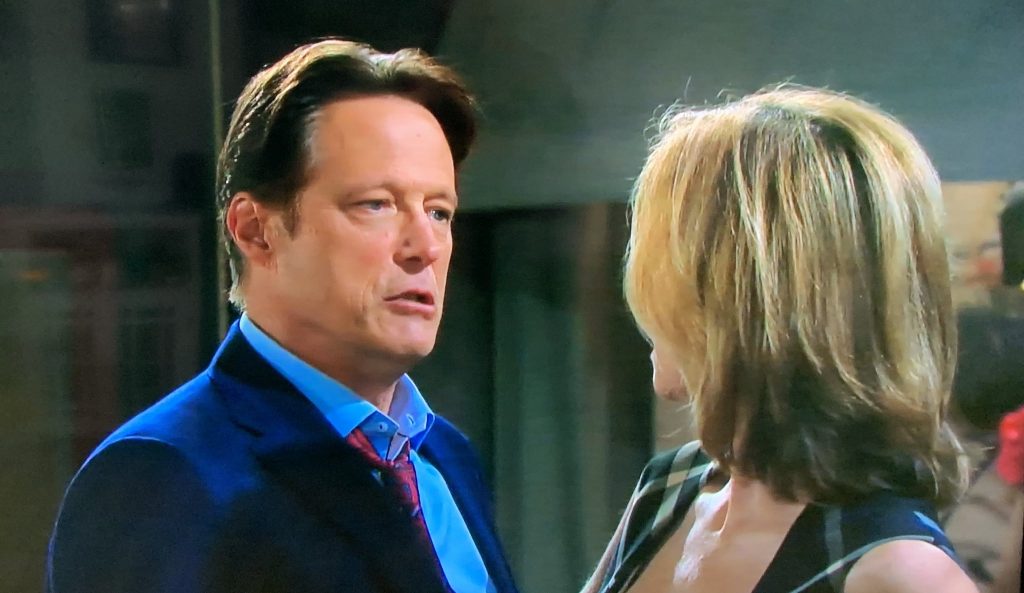 Days Of Our Lives (DOOL) spoilers tease that Thursday, September 19 will be another exciting experience for the viewers!

JJ Deveraux (Casey Moss) and his father Jack Deveraux (Matthew Ashford) grow increasingly worried when they are unable to contact Jennifer Horton (Melissa Reeves) and have heard nothing from her.

As Days of Our Lives viewers will recall, Jennifer was cleaning up the lab that she got set up at Salem University Hospital for Dr. Wilhelm Rolf (William Utay) to work in, and a mysterious figure dressed in black came at her with a scalpel and abducted her!

Jennifer’s captor is revealed, and it is not who everyone including JJ and Jack think! Eve Donovan Deveraux (Kassie DePaiva) was everyone’s prime suspect for trashing the lab, and Jack and JJ undoubtedly will think she is the reason for Jennifer’s disappearance as well, based on her past behaviors.

In their investigation, however, Jack and JJ will learn from Dr. Kayla Johnson (Mary Beth Evans) that she recently fired Dr. Henry Shah (Piter Marek) for becoming violent with her! Jennifer once dated Dr. Shah and it looks like he became obsessed with her and snapped!

Days of Our Lives Spoilers – Kristen DiMera Tries To Win Brady Black Over With Good Behavior!

Elsewhere, Kristen DiMera (Stacy Haiduk) decides the best way to win Brady Black (Eric Martsolf) back is to try to convince him that she has changed. Kristen embarks on a campaign of good deeds to try to impress him; however, that is going to more than likely be a very long process since it takes time to rebuild someone’s trust! Brady trusts Kristen about as far as he can throw her, which is probably no farther than down on a bed! She’d take that, though!

Days of Our Lives #DOOL Spoilers And Recap Tuesday, September 17 – Jordan Is Back; Eli Issues A Warning @celebratesoaps https://t.co/vX9je7zBtP

As Days of Our Lives viewers know, Sarah Horton (Linsey Godfrey) has been struggling with an important issue; her pregnancy! She found out she was pregnant, presumably by Eric Brady (Greg Vaughan) who basically dumped her like a hot potato when he found his true love Nicole Walker (Adrienne Zucker) and her daughter Holly Jonas (Scarlett and Harlow Mallory) and brought them back to Salem from Chicago, although he did try to let her down easy.

Sarah knew when he left to find them that it was a foregone conclusion that he would reunite with Nicole, however, an unplanned pregnancy was the last thing Sarah needed at this time. So she weighs her options and makes a tentative decision to terminate the pregnancy.

That is the only decision she can think will work without Eric asking questions when she starts to “show”. She doesn’t want Eric or anyone else, especially not her mother, Maggie Kiriakis (Suzanne Rogers) to know about the pregnancy because Maggie would certainly talk her out of terminating it and she would insist that Eric needs to know!

Days Of Our Lives (DOOL) Spoilers: Chanel Marries Meal Ticket Xander Who Is Too Drunk…