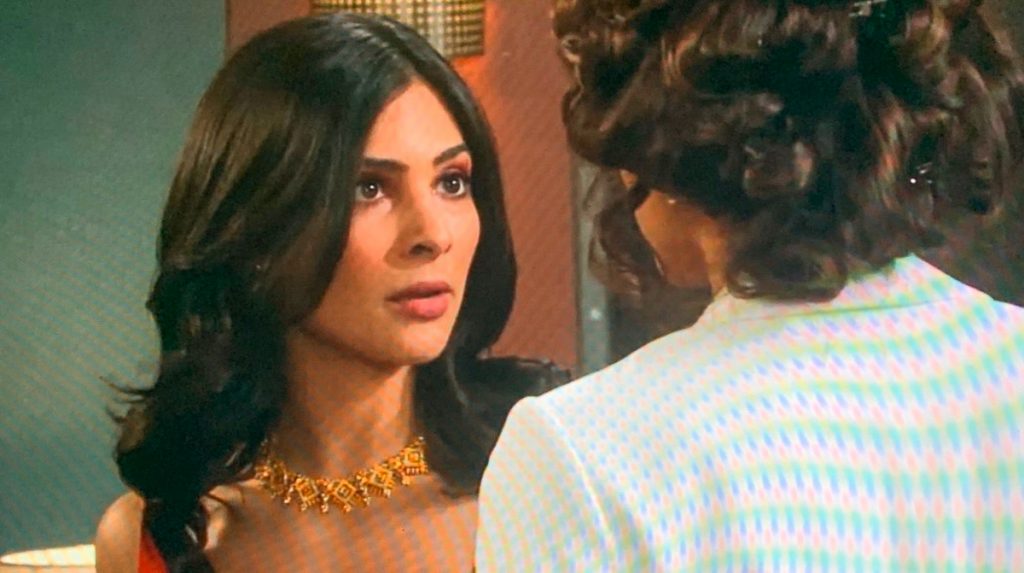 Days of Our Lives spoilers tease that Thursday, November 14th’s episode will be another day of exciting drama for Days of Our Lives fans. Remember Salemites have jumped a year ahead in time, but answers to what happened in the year skipped will be answered either in flashbacks or conversations among the Salemites!

Gabi DiMera (Camila Banus) is now back together with Eli Grant (Lamon Archey) after the time jump; and Chad DiMera (Billy Flynn) has returned to the helm of DiMera Enterprises. Gabi is talking to Eli as her boyfriend, not as the Salem Police Commissioner as she tells him her concerns. She thinks that Chad is plotting against her to push her out of the company! Her company, GabiChic is still under the DiMera umbrella and she has had problems with the corporate wanting to divest it before. Furthermore, she’s sure that Chad is bent on revenge against her for switching Charlotte DiMera’s (Chloe Teperman) paternity results, and she is now a toddler! Can’t Chad move past this?

Chad admits to Abigail DiMera (Kate Mansi) that he has been getting emails and texts from his father, Stefano DiMera (most recently played by the late Joe Mascolo). Abby may wonder if someone has stolen Stefano’s identity or impersonating him. However, Chad is certain that this man is his father. Days of Our Lives viewers know that Princess Gina (Kristian Alfonso) is talking to someone in person that appears to be Stefano, and she calls him “Steffy”!

JJ Deveraux (Casey Moss) blows up at Brady Black (Eric Martsolf); JJ has gotten addicted to drugs, they appear to be prescription drugs but he may just carry them in a prescription bottle, as shown in Monday’s episode. JJ has had a terrible time coping over the past year, with his mother in a coma she wasn’t expected to ever come out of, his aunt Adrienne Kiriakis (Judi Evans) being killed, and his girlfriend Haley Chen (Thia Megia) having died as well. The grief and shock combined has nearly destroyed poor JJ, and after Eric Brady (Greg Vaughan) noticed he was high in yesterday’s episode, he encounters Brady, and blows up at him! JJ doesn’t want to be ragged on about his pills!

DOOL Spoilers – There Is A Shocking Reveal Involving Lani Price

There is a shocking reveal involving Lani Price (Sal Stowers). On the Days of Our Lives preview, “Salem Flashes Forward” there is a scene where Eli encounters Abe Carver (James Reynolds) and asks him how Lani is doing. Abe responds “Lani is gone”! Viewers will need to tune in to find out exactly what Abe meant! He could mean she died, or that she is in a coma or a catatonic state, or that Lani went into a deep depression and is no longer the Lani they knew. The sadness in Abe’s face and eyes seems to indicate it is something more than just that she moved away or went on a trip!