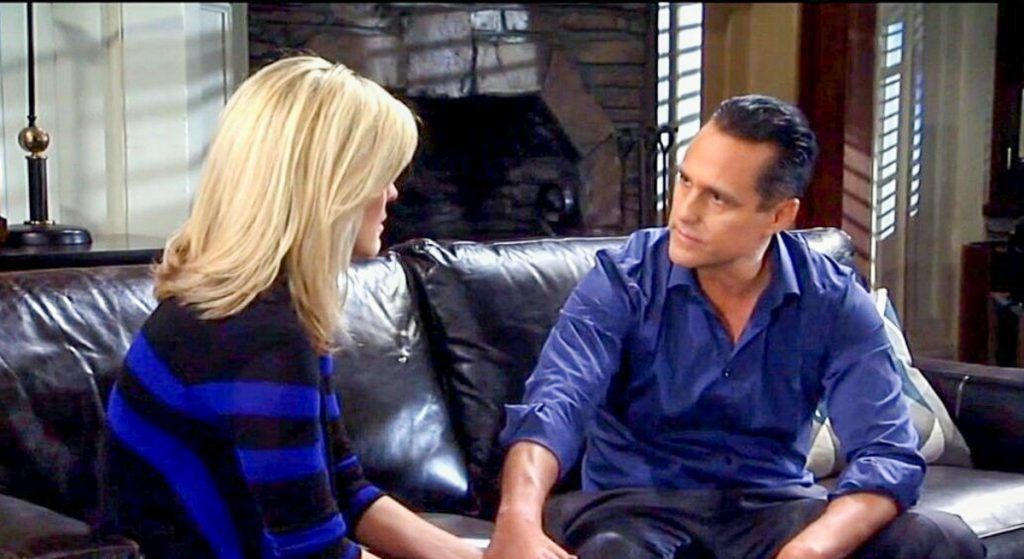 Sonny Corinthos (Maurice Benard) brings a very special visitor to Shadybrook to visit Ava Jerome (Maura West). Ava says she doesn’t want any visitors but Sonny tells her he’s sure she will want to see this one – it’s their daughter, Avery Corinthos-Jerome (Ava and Grace Scarola). They will have a little visit so that mother and daughter can catch up, and maybe Avery has even colored a get well card for her mom or a picture. Later, Sonny and Ava – probably minus Avery – will discuss Avery’s well-being and how Ava’s time in Shadybrook, and the circumstances leading up to it, affects it.

Elsewhere, Sonny’s stepdaughter, Josslyn Jacks (Eden McCoy) wants to continue a conversation that she had earlier with her mother, Carly Corinthos (Laura Wright). She had asked her previously if she could move in with her father, Jasper Jacks, otherwise known as “Jax” (Ingo Rademacher) for a while feeling like maybe she wouldn’t be reminded so much of her late boyfriend Oscar Nero Quartermaine (Garren Lake Stitt).

Unfortunately, Carly just found out that Nikolas Cassadine (Marcus Coloma) is alive and staying there and she was tasked with keeping his survival a secret for the sake of her cousin Lulu Spencer’s (Emme Rylan) and aunt Laura Collins’ (Genie Francis) safety. Nikolas is afraid that Valentin Cassadine (James Patrick Stuart) could harm them as leverage over him. So she shuts Josslyn’s idea down, at least for the time being.

At the Port Charles Police Department, Charlotte Cassadine’s (Scarlett Fernandez) has been brought back from the piers, likely by Jason Morgan (Steve Burton) or Anna Devane (Finola Hughes) although both of them probably came in because of needing to make a statement about Cassandra Pierce’s (Jessica Tuck) presumed death in the escape boat that Valentin provided her, complete with bomb, which he set off once he knew she was in it!

Lulu and Laura are both there and waiting for her, but the little girl is vehement when she says she doesn’t want to go home with Lulu! She tells her mother she is NOT going home with her! Valentin said that she was scared of Helena Cassadine’s (Constance Towers) portrait; maybe she knows there are photos of Nikolas in Lulu’s house and she is scared to go home with her because she saw him on the pier with a gun! Nikolas really stared at her also, but it’s hard to say if he recognized her as Valentin’s daughter or if he saw a strong resemblance to Lulu at that age; longtime General Hospital viewers will recall that Nik was a teenager when Lulu was born!

Meanwhile, Robert Scorpio (Tristan Rogers) is being his usual nosy, overprotective self when he gets Anna alone and tells her he really thinks there’s something that she should know! The only problem is, Robert would put his own spin on it and tell her he thinks Dr. Hamilton Finn (Michael Easton) might be messing around with Hayden Barnes (Rebecca Budig) because of their child together, Violet Barnes Finn (Jophielle Love). Finn’s brother, Detective Harrison Chase (Josh Swickard) will give Robert some advice, and it might be advice to quit messing in his older brother’s relationship with Anna!

Still at Anna’s house, where Finn put Violet to bed in the guest room, Hayden gives Finn an out and tells him to just say the word, and he can back out now. General Hospital viewers will have to tune in to see if she’s talking about a revived relationship with her, or if she’s talking about being involved in Violet’s life and telling her that he is her father.

At Jax’s house, Jax is once again livid at Nikolas, as he gets up in his face and tells him he’s about an eighth of an inch from blowing his cover! Nikolas wants to keep himself and his survival a secret, and yet he keeps going out in public and getting into all kinds of situations he has no business getting involved in and implicating Jax as an accessory in some of it as well! Jax may be mad because he might assume that Nikolas is responsible for Cassandra’s explosive death as well as her escape from Pentonville, since the rental of the van Nikolas used was traced back to Jax’s credit card and he hadn’t even given Nikolas authorization to use it!