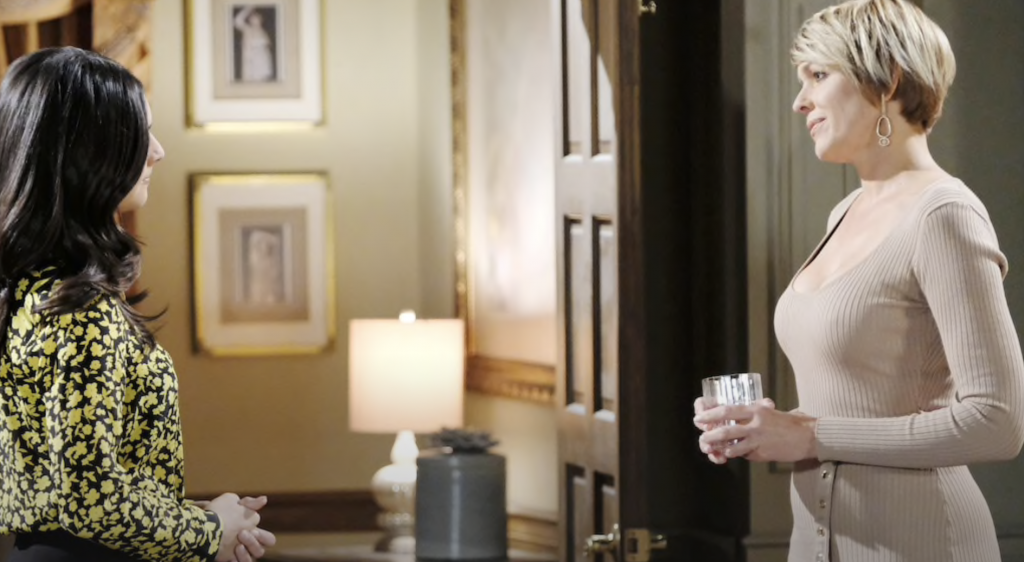 It begins with Anna DiMera giving her husband Tony DiMera (Thaao Penghlis) the tongue lashing that he deserves. For the longest time she’s been carrying around a jar of dust thinking that it was her husband. So it’s no wonder that she becomes furious when she finds out that he’s been alive and well this entire time. And to make things worse, he’s now married to his sister, Kristen DiMera. Of course, Anna has no idea that the marriage is invalid, but it infuriates her nonetheless.

Either way, Anna believes that Tony betrayed her with another woman and that is making him even more mad. She’s not only going to give him a good piece of her mind, but also slap him in the face, which is something we’ve seen the ladies of Salem do quite a few times in the past, too. Days of Our Lives spoilers also tease that Anna is going to make a shocking announcement and it’s one that no one will be prepared for.

Also, Gabi Hernandez (Camila Banus) and Kristen DiMera (posing as Nicole Walker, of course) will have the kind of brawl that you won’t want to miss. Things are going to get pretty heated between the two women and before you know it, wigs are going to fly.

Gabi has no idea that the catfight will end in quite a surprise. She will find out that it’s not Nicole Walker (Arianne Zucker) that she is fighting, but someone completely different. Kristen wasn’t ready for this, but now she’s got no choice but to reveal her true identity. What makes things worse is that Stefan DiMera (Brandon Barash) walks in on all of the action as it happens. Unfortunately, things won’t end very well for him.

Days of Our Lives Spoilers: Will Rafe And Hope Ever Reconcile? https://t.co/vY8jDnU6cm pic.twitter.com/pPBVbp0HG7

Also, Haley Chen ends up falling down the stairs. That’s because she’s slowly but surely going crazy as she can’t get Claire Brady (Olivia Rose Keegan) out of her head. Elsewhere, Sarah Horton (Linsey Godfrey) and Eric Brady (Greg Vaughan) are free to get up close and personal now that Rex Brady (Kyle Lowder) is no longer in the picture. Ciara Brady (Victoria Konefal) and Ben Weston (Robert Scott Wilson), meanwhile, are going to end up finding themselves trapped under Kristen’s bed. Of course, that’s the last place that they want to be. Fans will simply have to tune in to find out what will happen next!