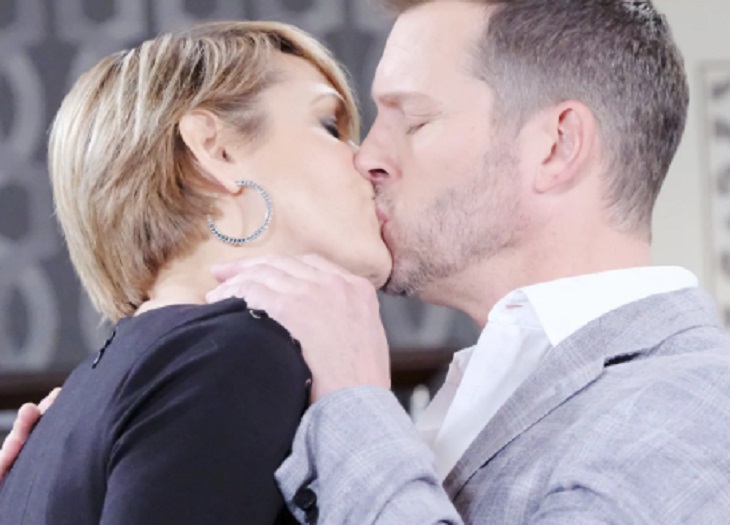 Days of Our Lives (DOOL) spoilers tease that Brady Black (Eric Martsolf) will soon be feeling the pressure. He’s been doing his best to help Nicole Walker (Arianne Zucker) with her recent trials and tribulations. But as DOOL viewers know, Nicole is really Kristen DiMera (Stacy Haiduk) in a “Nicole” mask.

Brady truly cares about Nicole, and he still feels guilty for blackmailing her into leaving Eric Brady (Greg Vaughan) and setting her up so that she could be used by Xander Kiriakis (Paul Telfer). And because of his guilt, Brady seems willing to help Nicole out now, even with things that he doesn’t really comprehend.

For example, Brady recently helped “Nicole” marry Tony DiMera (Thaao Penghlis). Brady arranged for the justice of the peace to show up and marry the couple, and he generally helped facilitate the wedding.

Brady seemed to buy Nicole’s explanation that she wanted to take over DiMera Enterprises to give her life meaning after Holly Jonas’ (Harlow and Scarlett Mallory) death.

Of course, DOOL viewers know that Kristen not only wants to get her hands on the DiMera fortune, but she wants Brady as well. Kristen knows that she has virtually no chance of getting Brady back as herself, so she’s been trying to seduce Brady as Nicole.

But so far, Brady hasn’t fallen for “Nicole’s” advances. He just hasn’t felt that it would be right to sleep with Nicole, since she’s still supposedly in deep grief over Holly’s death, and since it would cause a monumental rift between himself and Eric.

But Kristen seems determined to get with Brady any way that she can. Her ultimate goal is to get Brady in bed as “Nicole.” She figures that this is better than nothing, and according to DOOL spoilers, she’s really going to start turning up the heat on Brady.

Days of Our Lives spoilers say that Nicole will once again come onto Brady. Of course, this will be right after Nicole has married Tony, so the timing will be quite odd. But Brady is aware that Nicole’s marriage to Tony is a ruse in order for her to get her hands on DiMera Enterprises, and so when Nicole comes onto him, he’ll probably have very mixed feelings.

On the one hand, a part of him is still very much attracted to Nicole, but on the other hand, she’ll have just married Tony. Plus, Brady will still be concerned about the effect that sleeping with Nicole will ultimately have on Eric. But, according to DOOL spoilers, Brady will give into Nicole’s advances and the two will wind up making love.

And so once again, Brady will make love with Kristen…although he’ll think that he’s making love with Nicole. And it seems that he’ll have no idea that the person he’s with isn’t Nicole!

But will Brady and “Nicole’s” fling be a one-time thing, or will they officially get back together? Kristen would probably like nothing more than to become a couple with Brady, even if it means staying in character as Nicole for the long term. Do you think she’ll be able to pull that off?